In a shell and tube heat exchanger, does reducing flowrate affect the outlet temperatures?

Let's say I have 2 exchangers that are completely the same, only difference being that one of them has half the number of tubes. Also let's assume the coolant is the same and has the same inlet temperature. I want the fluid to cool from 100 degrees to 70 degrees, and this works in the first exchanger. I wonder if reducing the flowrate of the fluid can make it possible for the second exchanger (with less tubes) to to the same job (to cool the fluid from 100 to 70 degrees).

Heat transfer rate is equal to:

By reducing the number of tubes, area gets smaller and so does the heat transfer rate.

So if I want this exchanger with a halved heat transfer rate to do the same job (in terms of outlet temperatures), I assume I would need to halve the flowrate as well? Can someone tell me if I am correct here and maybe show it mathematically?

I assume you are referring to a exchanger like the following: 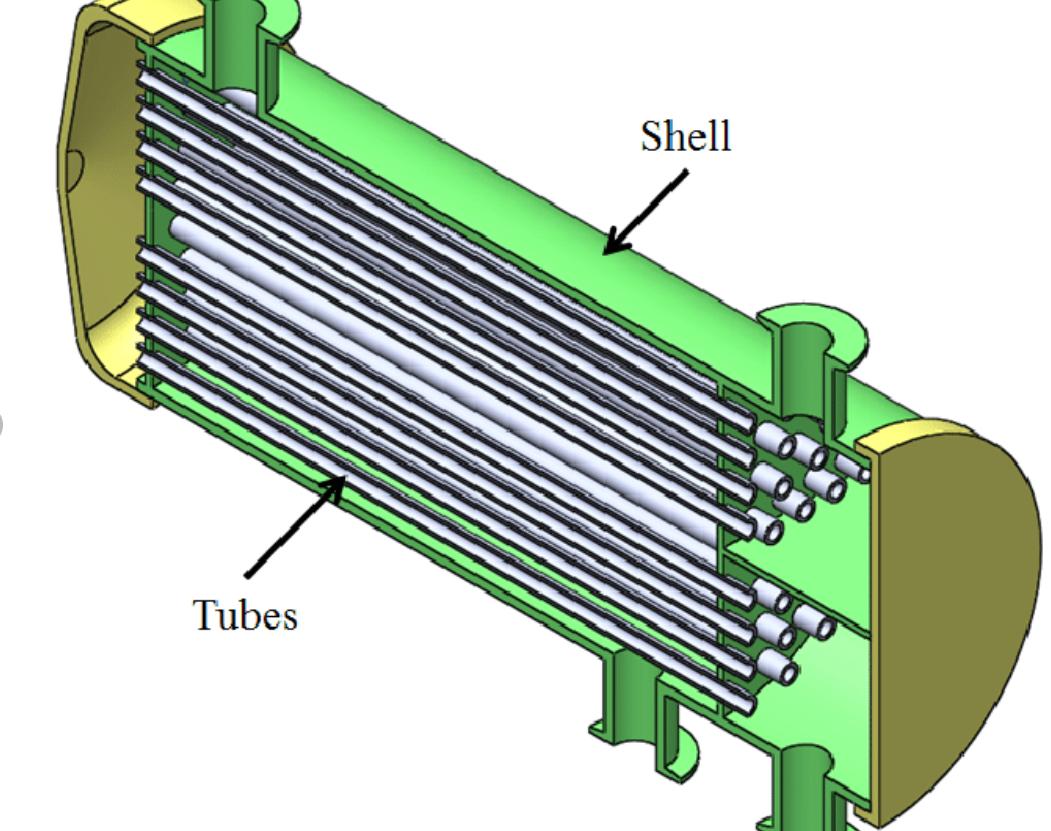 My understanding of your question is,

if I remove half the tubes can I get the same temperature difference?

Since you have only half the transmitted heat energy, the seemingly obvious solution would be to reduce by half the flow rate of the cooled liquid (the one coming in at 100$^oC$). Although, if you reduce to half the flow rate then the average speed on the tubes will halve, and things should be ok (i.e. half the heat transferred, would reduce the temperature of half the flow.).

However, the problem is that the following, by changing the number of pipes, you are changing the internal configuration. That will affect the flow in the shell.

Because of those changes, then the Reynolds number might change.

The Reynolds number affects the Nusselt number which control the convection. Depending on the case , $Nu\propto Re^n$ where n is a number ranging from 0.5 to 1.

However that means that the heat transfer coefficient U changes (if for example the speed becomes too low then the flow becomes laminar and the heat exchange is significantly affected).

So the bottom line, is that this is not a simple problem to answer, and you need more details on the internal configuration of the heat exchanger to make an estimation.

Not the answer you're looking for? Browse other questions tagged mechanical-engineering thermodynamics heat-transfer heat-exchanger or ask your own question.