Why do we always need to calculate the 'Moment of Inertia' about neutral axis for bending?

The derivation for bending stress is depended on the assumption that the strain distribution across the thickness is linear. i.e. 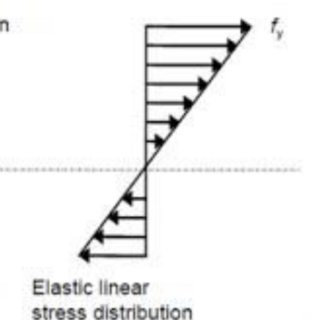 Because in the linear region the constitutive equation is $\sigma(z) = E\cdot \epsilon(z)$, the development of stress at distance z is proportional to the strain. i.e.

Because we're not interested in the moment of inertia or the "c" ordinate of a particular area element of the beam for their own sake - we're interested in them as intermediate steps on the way to computing the bending moment and/or the axial load. That involves multiplying by axial longitudinal stress and integrating. If you take the origin anywhere other than on the neutral axis, then the formula describing the axial longitudinal stress is more complicated, and you've got a harder calculation.

Not the answer you're looking for? Browse other questions tagged statics solid-mechanics bending or ask your own question.

1
What is the distance at which the triangular UDL is acting on in this problem?
1
Where is the axis of bending for a box lifted by a crane?
0
Does the Superposition principle actually make sense in reality for a rod subjected to bending and axial force togehter?
0
Why am I seeing a moment reaction at the supports for these beams in FEM?
0
Modeling the Internal Forces Exerted on a Catapult Arm while Throwing
1
Maximum shear in a beam
0
Can the general Flexural formula be used in the case of transverse loading of a beam?