Does thread angle modulate ease of (rotational?) penetration in a screw?

Forgive me if this question is too simple, I'm a complete outsider to the field of engineering and mechanical engineering.

A friend of mine had said that the thread angle of a screw modulates how easily a screw is able to penetrate a certain material. I think he was talking of mechanical advantage in screws, and had said that it's essentially like an inclined plane or an axe, it'll go through easier/with less work if the angle is decreased.

I just wanted to verify if this is true, and if the length of the (flank?) or just triangle if we think of it in simple terms, also needs to increase, in the same way an inclined plane's length needs to increase in order to modulate the angle and also reach the same height, and that will allow a person to go up the plane with less effort.

I made a GIF to (hopefully) more clearly state what I want to understand:

Here I am scaling the Z-axis. Would this scaling (making it thinner) result in a horizontal force that allows the screw to penetrate a material with less work? Would the major diameter also have to change to bring it up to the same length/height?

In other words can this angle here: 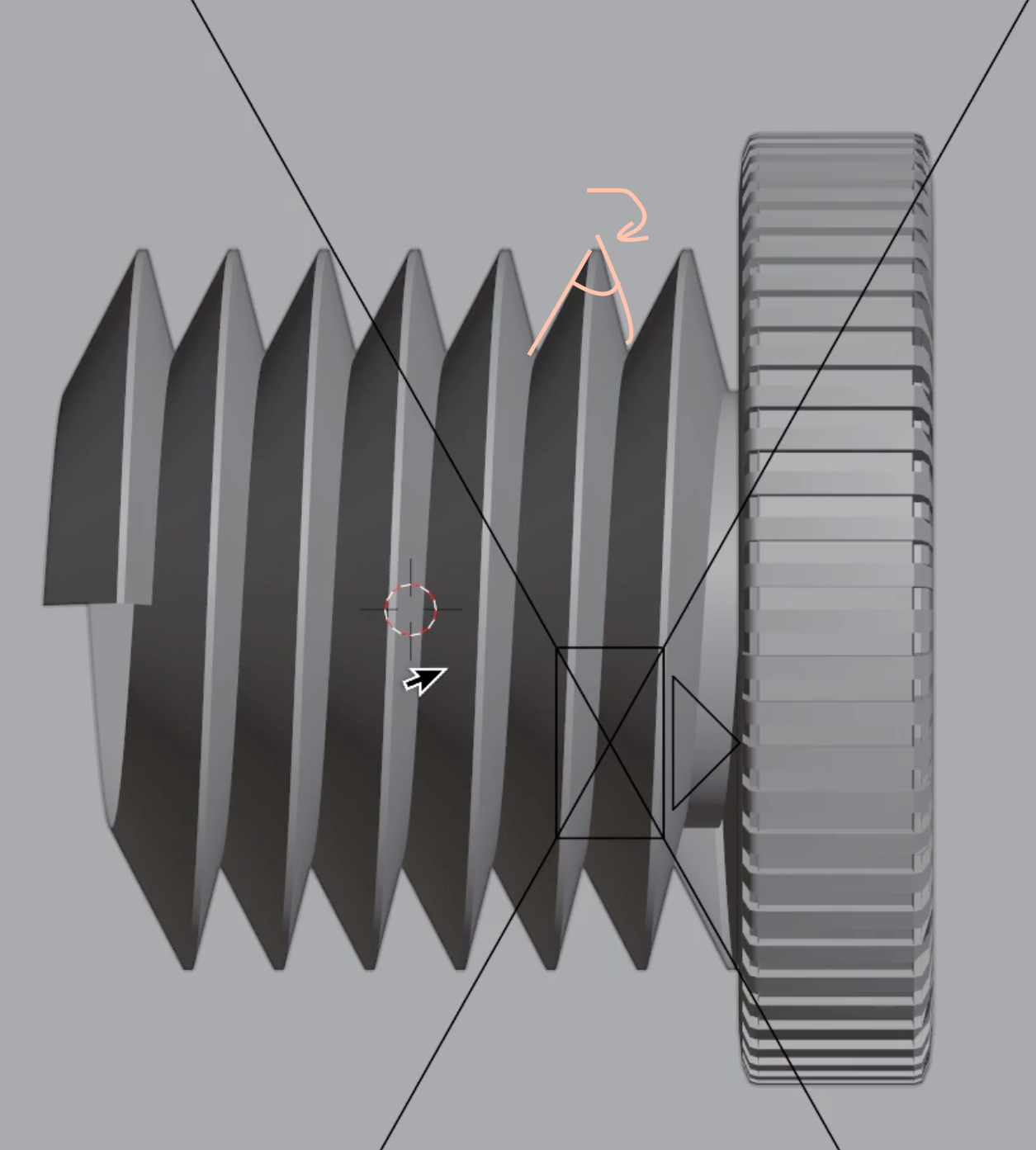 Be thought of in the same way in relation to the angle of an incline plane? (the lower the angle is, and the longer it is, the less energy to climb up it? Similar to an axe? (A sharper, longer axe will go in with less energy), here I'm mapping the crest of a thread to the crest of an axe.

Let's forget about the friction for now and say the resisting force of the material, P, the screw is being driven into acts only at the tip while the screw smashes the material or pushes it out of the way.

If we unwind one thread from the screw, stretched it flat, it is going to work as a ramp with the slope angle of $\alpha = pitch/2\pi r$

So the smaller the pitch the flatter the slope and easier to drive the screw.

However, there is a range of optimal pitch depending on the hardness of the material and the utility of the screw as a fastener.

For example too tight a pitch can eat away the threads and weaken the grip. Too wide a thread can unwind under the load.

What controls the effort required to move the the screw is not the thread angle but the helix angle. You can see the difference in the following image. 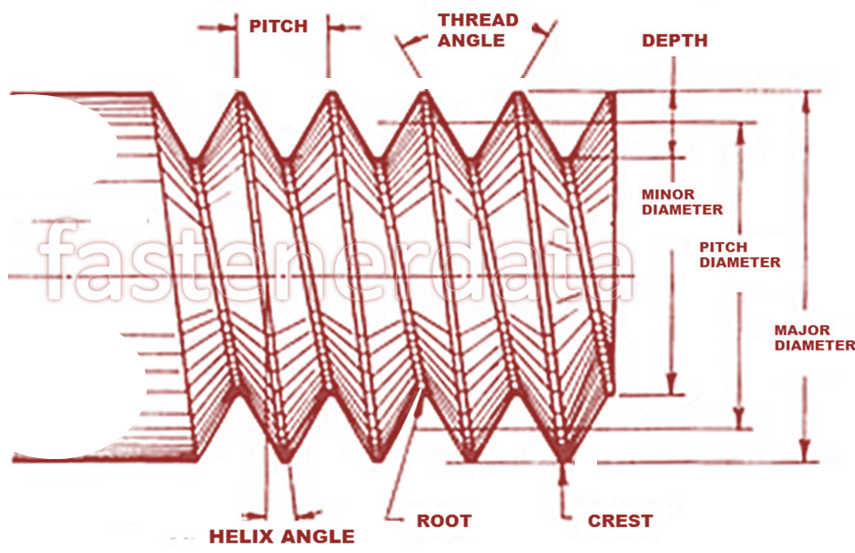 The lead angle $\lambda$ is calculated from: 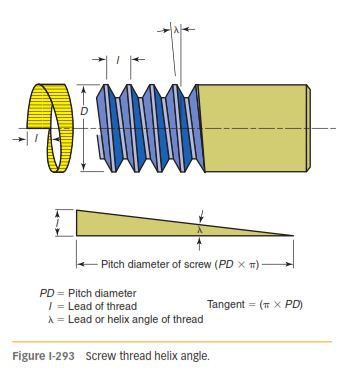 For a constant pitch, if you change the thread angle, you need to change the length of the flank.

In general the angle of the thread is of a certain form: 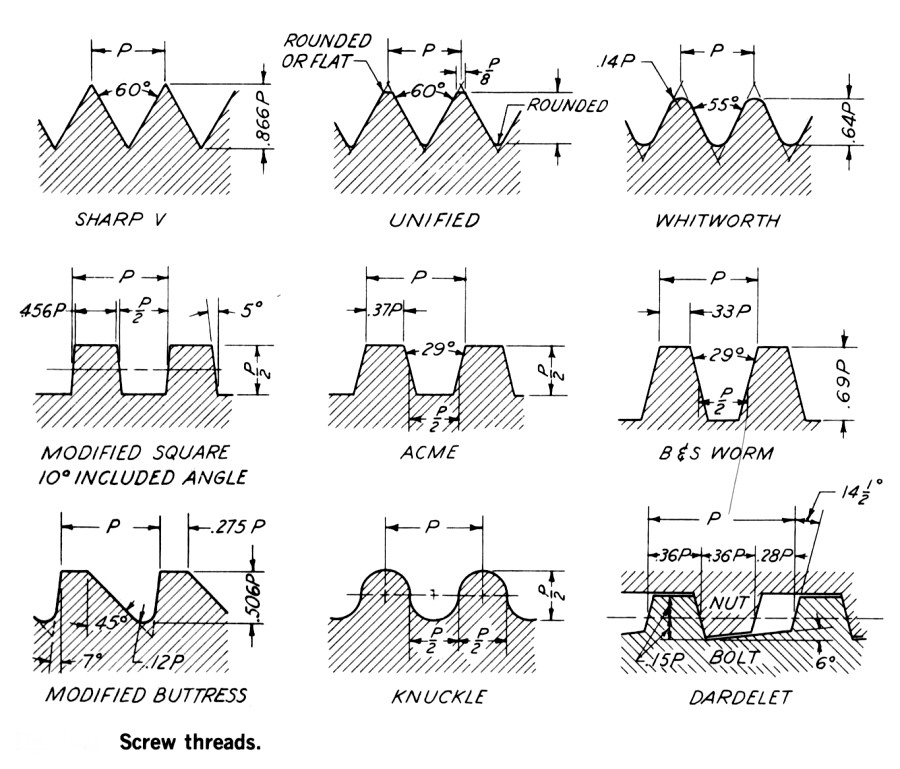 You will notice that in general most thread forms are symmetric for the bolt and hole (only the Darledet isn't - which I've never encountered outside of a diagram).

5
How to let a "screw" leave and reenter a thread
2
Center of Gravity of Precast Concrete Steps
0
Convert translational stiffness to rotational stiffness of a screw
4
Medieval wooden screw press tonnage
3
Surprisingly Low Efficiency of Compound Machine [Project Help]
0
Manufacturing screw thread onto lid
1
How does this screw height adjustment mechanism work?
3
Why is the thread of the screw linear? Can it be wavy?
0
Clutch for rotating axis of mount used for astronomy
1
Constant tension...does angle between rollers matter?