How does an arch transfer vertical load? [duplicate]

I am hoping that someone can explain to me how, physically, an arch transfers a purely vertical load (Fy) into a diagonal force to the abutments of the arch.

I understand that the y and x components of the reaction force support the load, but what creates the horizontal forces Rx1 and Rx2? I assume that they have to exist, as without an x component surely Fy could not otherwise transfer diagonally.

The reason why forces are transmitted in arches is similar to the joint structure in the other question. Additionally there are the internal bending moments that also change the undeformed shape of the element (be it beam or arch).

Although not in your original post, I will focus on the forces in stone arches. In order to understand it, from another perspective have a look at this image, from the "The Geometrical Design of Masonry Arches". 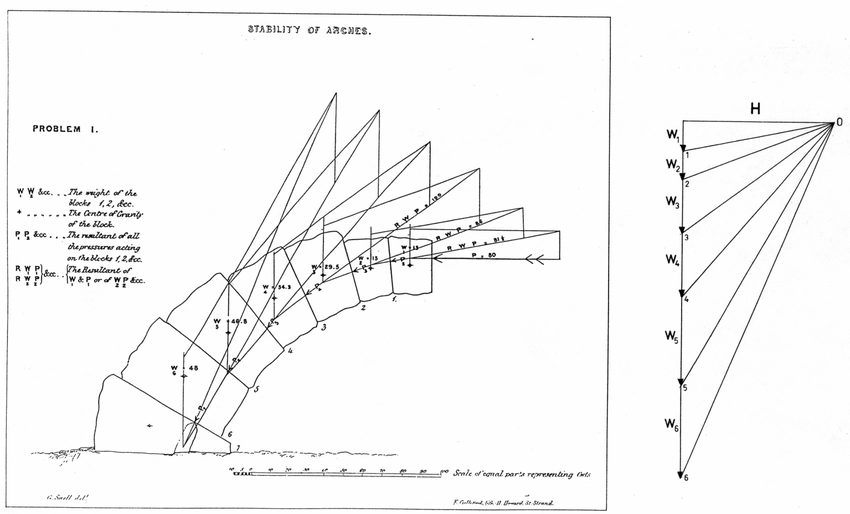 Figure: Left, line of thrust in a semi-arch. (source The Geometrical Design of Masonry Arches

In the image above the arch is designed as part of individually cut stones which each is cut in a specific way, and are placed in a specific order. The general shape of all the stones is similar to a keystone 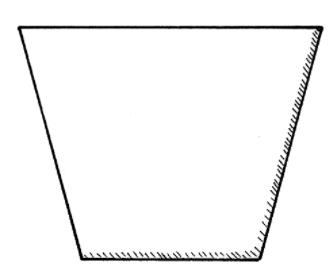 The forces acting on the voussoir are like in the image below: 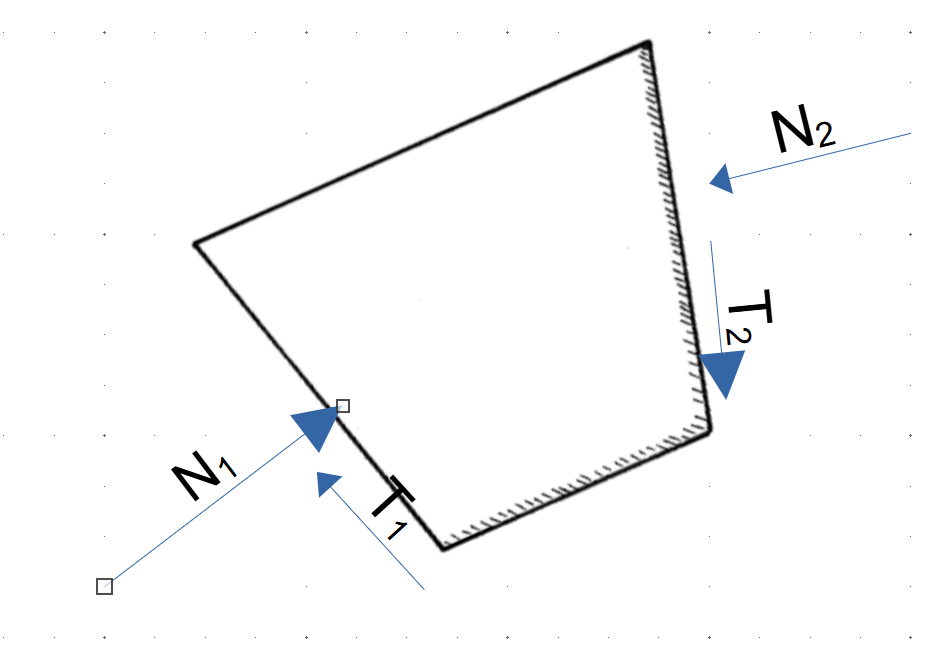 Figure 3: Forces acting on a voussoir

It is noteworthy, that due to the angled shape of the stone and the added weight of the stone:

the above differences in forces results in a bending moment, which in turn results in an (sort of) triangular distribution of the normal Forces ($N_1, N_2$).

It is interesting to note that the stones become larger. There is a very good reason for that. The reason is that the added weight acts to stabilise the column (the resulting force vector is more vertical). See the following figure:

Figure: use of gargoyles to increase stability of columns from lateral weight (source: how-gargoyles-and-pinnacles-saved-gothic-architecture)

The arch works by being deformed and compressed under the vertical loads.

When it deforms it wants to settle down and its geometry changes trying to trace a shorter path. But that shorter path means it strains the material creating compression stress in the material of arch, being it pieces of rock or concrete or masonry or even bags of dirt.

That is the basics of the story. But the shape of the arch should be in a way that the moment is kept to a minimum or even zero.

For example, the optimal shape for an arch with uniform loading is a parabola. 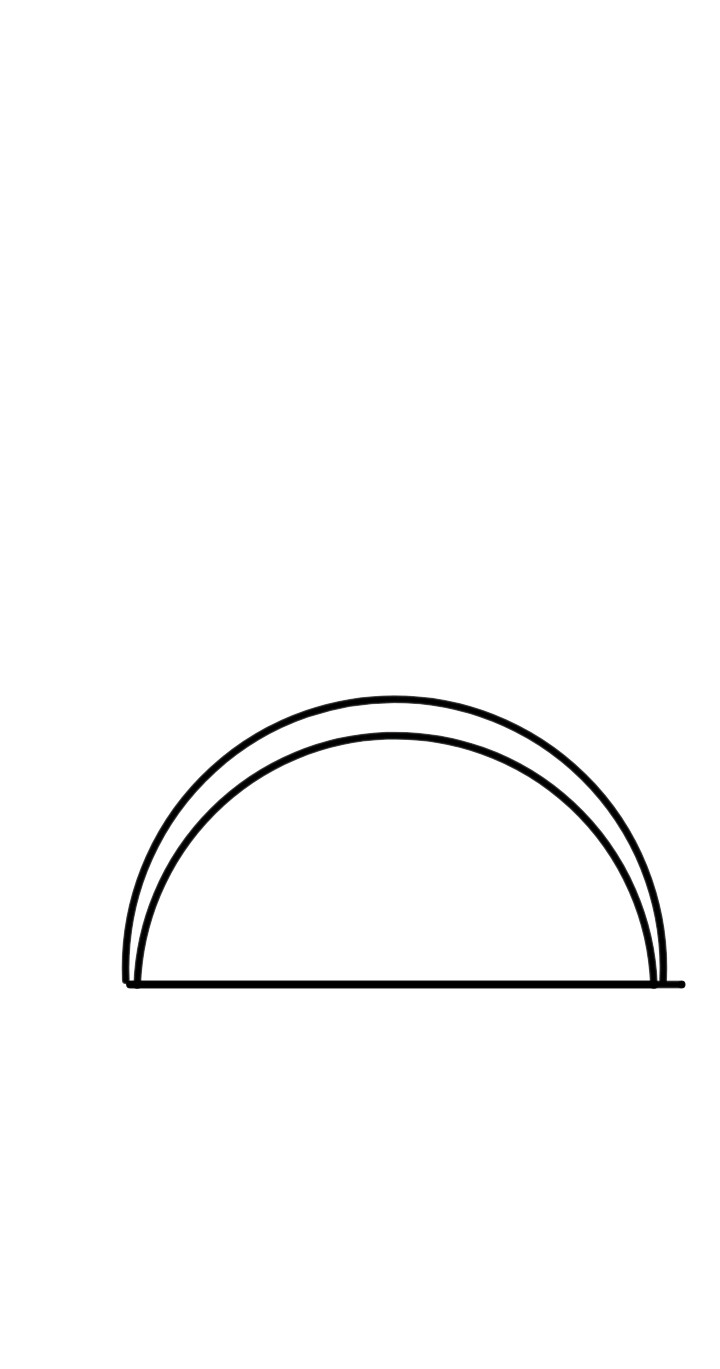 Below is the free body diagram of a 3 hinged arch. The forces are passed through the internal stresses. See this article for examples. 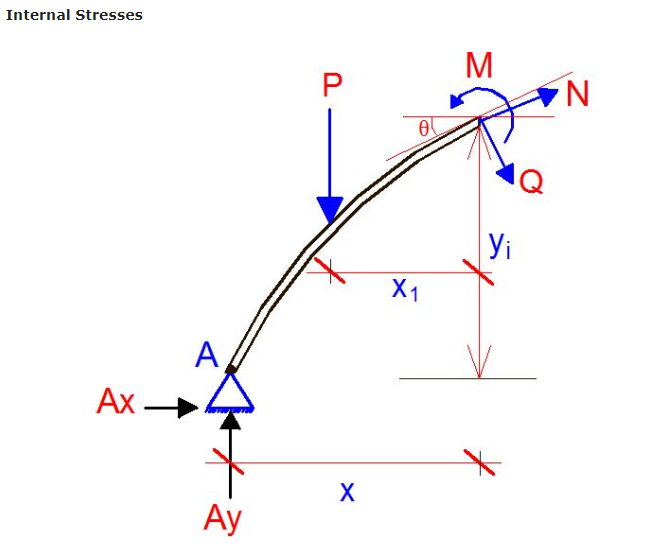 Not the answer you're looking for? Browse other questions tagged structural-engineering civil-engineering architecture or ask your own question.

3
How exactly do forces transfer in different directions?

4
How to model elastic support in FEM?
1
Horizontal and vertical forces on supports
1
Critical Buckling Load for a Spring Supported Bar
0
Do concealed door closers exacerbate wear on a door's hinges?
0
Concept on two-force member
1
Structural Analysis of a TV Mount
0
What does Leonardo da Vinci mean in his statement on arches?