How exactly do forces transfer in different directions?

If we imagine the load being placed at the top of the below triangle, I realise that the downwards force is transferred into one which goes in a 'south east' and 'south west' direction down to the end of the triangle.

What I am trying to understand however, is how we get the sideways movement from a straight down movement. Is this simply a product of the force needing to travel along a beam which can only transfer compression, therefore even though there is no 'input' sideways force, one comes from the downwards force only. Or is the sideways force created by the reaction force from the opposing 'leg' of the triangle?

The direction of Forces isn't necessarily along the connecting element. If that happens depends a lot on the constraints between the different elements. For example see the following image: 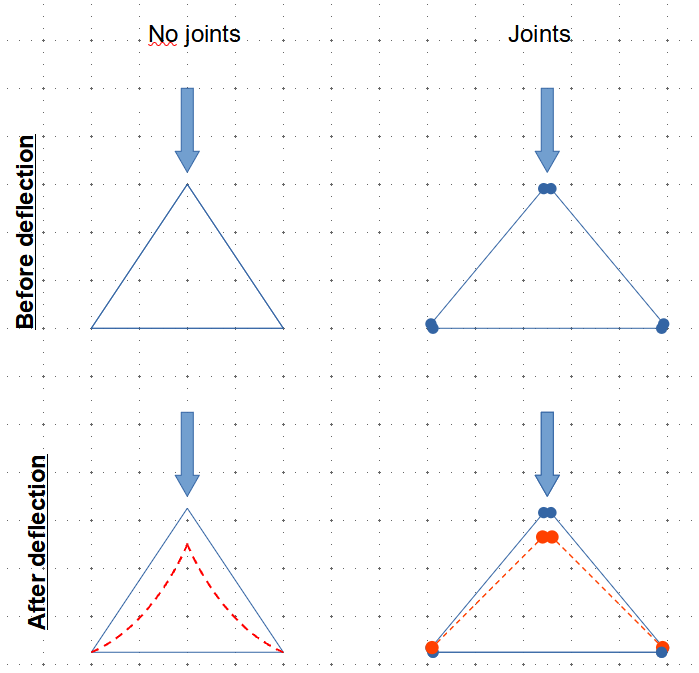 On the top there are the shapes before deflection, while at the bottom are $\color{red}{\text{the shapes after deflection with red}}$ (superimposed on the original structure). (NOTE: on the no joints there is another case with the opposite curvature, but I left it for simplicity sake's).

AS you can see the behavior is totally different (at least initially). Eventually the jointed structure will also have a similar shape due to buckling. However, on the no-joint structure the curves will start to appear immediately.

I will focus on the structure with joints and why the forces indeed travel towards one direction. The direction of the force is parallel to the member. 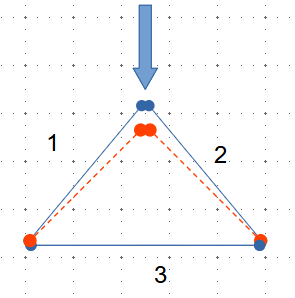 If I take a member - let;s say no 1 - then the only way that this element will be in equilibrium of moments and forces is when the forces are in the direction of the beam. 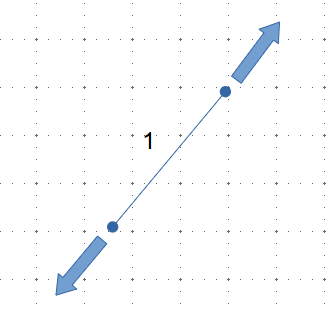 IF there are any forces perpendicular to the element axis then there is no equilibrium of moments of forces. Try it for any combination of forces (any of the yellow, green, red, purple that don't sum up to zero). 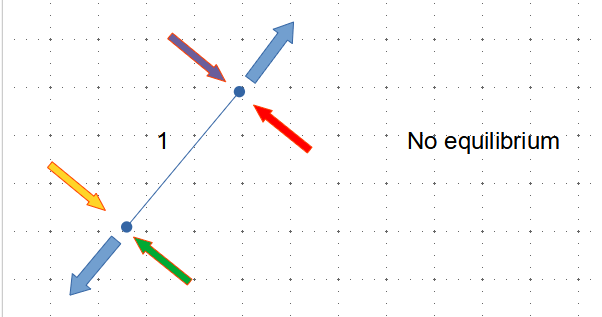 As a result, the structure divides the force in a way that new forces are generated that cancel each other (horizontal forces on the top sides of 1 and 2. Those forces are such that the resultant force combined with the fraction of the vertical force that travels downwards is in the direction of the beam.

A word of caution about (Fluid) Pressure

One final note, is that pressure from fluids is not the same thing. Although there are a lot of similarities with fluid pressure and material stress (similar units, definition), pressure does not have a direction (its a state quantity/function). Pressure is always normal to a surface. Therefore, although the result is the same (diversion of the flow, diversion of forces), the mechanism that happens is different.

Strickly to say, this can only occur for fluid materials or airflow. For which you shouldn't have any problem in understanding how the diverging occurs.

Diagrams below show how the force flow in a hollow triangle (left), a rigid body (middle), and the random flow of the fluid force. Note there is no surface pressure/force in the first and second cases.

Not the answer you're looking for? Browse other questions tagged structural-engineering civil-engineering statics stresses or ask your own question.

1
How does an arch transfer vertical load?

3
How to calculate the forces on members of a frame, due to a distributed pressure load?
1
Horizontal and vertical forces on supports
1
How to transfer reaction forces of beam to a weld?
1
How to find reaction forces in trusses?
0
Stress analysis for the same configuration but different material
2
What exactly is Hooke's law defined for?
0
How do I start determining the forces in the 3 bars?
1
Elongation due to tensile forces on a cylindrical object