Disposition of the generators on the shipwrecked Costa Concordia

Recently I have been reading about the shipwreck of the Costa Concordia, unfortunately what I read is not online, so I have no links, but it raised a lot of questions.

A rock hit by the ship tore a 50-metre gash which cause the flooding of 3 water tight compartments. The flooding disabled all the electrical systems, only the emergency generator kept working, but it could only power the communication systems and the lights, it didn't even have enough power to turn the rudder. Apart from that none of the descriptions of the events I read went into the technical details, I don't even know whether they could power a water pump to slow down the sinking.

I read the description of the ship on Wikipedia which told that the ship had a diesel-electric propulsion powered by 6 generators. Since they were all damaged by the flooding they had to be in the same compartment or in two adjacent water tight compartments. Actually I am still wondering how the compartments were arranged. Did they have only bulkheads going from side to side? Were there longitudinal bulkheads?

But actually my question is why put all the generators close together? I guess that putting by design two engine rooms in different parts of the ship would have increased the cost and the complexity of the systems, but it would have added some redundancy. Actually there could be two ways of adding redundancy, another solution could be to add some longitudinal bulkheads at the cost of extra weight.

What could be the cost increase and the technical issues due to a more redundant design?

Reading the @StainlessSteelRat post which does not answer my question I thought that maybe I put too many question marks that might have created some confusion. I'll rephrase my question, but I'll leave the old one above to leave the context, please ignore the question marks above.

From a 290 meters long ship with two engines and 6 generators designed to carry almost 5000 people counting crew and passengers you might expect some resilience. Instead all the systems were knocked out by a single breach. It seems that the designers didn't consider the possibility that a breach might have been that long, but also the designers of the Titanic called it unsinkable because they didn't consider the possibility of a long breach.

Now, to improve the resilience maybe they could have put one of the generators rooms close to the bow (far from the other one) and they could have added a longitudinal bulkhead to split the engines room.
What could be the cost in term of additional weight and complexity of such design or another design with as much resilience?

Carnival Splendor is an example of Concordia class ships.

Costa Concordia (built 2006, scrapped in 2015) was the first of all five Concordia-class liners operated by Costa Cruises - together with the sisterships/fleetmates Costa Serena (2007), Costa Pacifica (2009), Costa Favolosa (2011) and Costa Fascinosa (2012), plus the Carnival Cruise Line's ship Carnival Splendor (2008).

From a US Coast Guard investigation into a fire in the engine room (p14):

This a tad better quality than other images of Deck C. US Coast Guard clearly identify Watertight Doors. Watertight bulkhead (in Red) is shown.

From Costa Concordia - Damage and Stability: 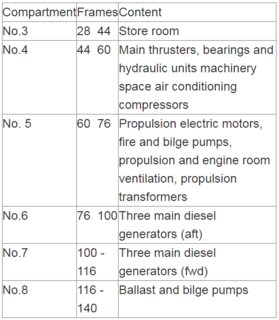 Damage (in Red) was across both engine rooms (five watertight compartments). So initial flooding would of taken out all electricity, except for the Emergency Generator (1.5MW), which would only supply Emergency loads (some lights, steering gear, bilge pump, fire pump, communications, elevators). Hole was too large for bilge pump and fire pump (which would have to be reconfigured for pumping damage water) to do anything.

Edit: Apparently, Emergency Generator started but failed. So vessel had no power.

The Sinking of a Ship

21:46:05 the emergency generator that provides power starts only for 41 seconds.

If there was a separation of forward and aft engine rooms, ship would of had some power, but initial damage was too extensive for 50% generating capability to have any major impact on accident or evacuation of the ship.

When you hit a rock at speed, it is just physics. Movable ship meets immovable rock!

This means there would be a large current from the generators to switchboards to propulsion motors. To limit current, switchboard and generators will be at a high voltage 11kV. Transformers will step-down voltages to 440V for motors, pumps and 120V (or 240V) for outlets, lights, with a possible intermediary voltage (690V) for some pumps, thrusters, or compressors.

With electric propulsion, generators can go anywhere on the ship. But the reality is Generators and Main Switchboard will be close to Propulsion motors to minimize length of conductors and keep 11kV conductors protected (channel).

The switchboard is radial architecture (Generators - Switchboards - (Distribution Panels) - Loads). The Carnival Splendor (fire between switchboard and generators) and Costa Concordia (hull breach with generators in adjacent compartments) demonstrate the problem with this arrangement, loss of power if something bad occurs.

Ring distribution is already used in millitary vessels and vessels (offshore supply and feeder tankers) with DP3 (dynamic positioning). DP3 vessels position themselves close to drill ships or platforms, so must have a FMEA​ (failure modes and effects analysis) plan so if something fails, the steps to keep the vessel in position are already known. If this fails, do that.

As for costs, that is a little harder to say/guess. A ring switchboard would require additional breakers for cross-over or ring connections and a high-voltage copper conductor ring going around the ship. This additional cost would be offset by a decrease in copper costs, as smaller conductors would be used connecting individual loads to the power system because cable runs would be shorter, and alternative construction methods. Regulations require an unspliced run from source to load or distribution pannel. So if the distribution system is distributed, modular construction with shorter modular wiring, glanding (waterproofing wires penetrating bulkheads), fire protection is easier, which is cheaper. Instead of wiring in shipyard, modules can be built off site and only main ring would have to be connected in the shipyard.

So additional costs, but opportunity for time savings and less copper. Equivalent???

Modular construction is the accepted norm in the shipbuilding industry. Modularization allows pre-fit of many systems and equipment. Cabling, to a large extent, is one of the exceptions to modularization. This is a major limitation in the way of maximizing construction efficiency. A mid-size offshore support vessel is fitted with some 300 km of cables which translates into significant cost and installation time scheduling implications. Installing cables is a highly labour intensive process. Cables have to be pulled one by one through sheaves and pulleys, lead through tight spaces and hard to reach openings. The root cause of having to rely on cable pulling technique for installation is the nature of the philosophy for power distribution. Power is distributed from a strategically positioned main switchboard directly to large loads and via feeder circuits to distribution panels and MCCs. Because all of these conductors originate from a single centre, this kind of distribution philosophy is known as “Radial”. In a radial concept, cables run long distances from the central point of distribution to remote consumers. The net result is a large number of cables to be pulled throughout the ship. The zonal distribution philosophy emerged as a method for fault tolerance, improved availability and better survivability for naval applications. Side benefits of the zonal distribution method are lesser quantities of cables, which is a cost saving measure on its own, and suitability for modular installation. The zonal distribution system treats each construction module in a manner, analogous to a district substation in a land based power grid. This analogy explains how all consumers installed in that module can be prewired and then hooked up to the bus though a single, redundant point of connection. Because a module is typically limited in its physical extent, many cables can be “walked” into location, as opposed to pulling. In fact, most main cable ways can be preassembled in the form of harnesses and hence entire groups of cabling can be installed by a single “walk”. A side benefit of localizing cable runs within the boundaries of construction modules is the ease for electrical isolation in case of a fire or flood incident affecting the module.

Engineering is a knowledge of physics and a game of economic tradeoffs. I have not designed any watercraft, and have less knowledge this specific wreck than the OP, but I can explain some of the engineering design process and business management that results in situations like this.

The individual engineers do their specific job functions to best meet the requirements they have been given by business managers that have business specific economic and functionality requirements. The engineers at this level are usually highly ethical and do the best they can within the financial and engineering constraints of their task.

The requirements for the power plant group was likely:

It is easy to see in hindsight that this specific scenario could have benefited by having two separated generator compartments, but survival of the vessel after a wreck was not their priority.

The backup plan on a military vessel is to have redundant redundant systems to limp back to port; because in wartime there might not be anyone coming to save you. Operating costs are considered, but they have a taxpayer budget and no competition to worry about, so they focus on reliability and functionality.

The backup plan on a vacation cruise ship is to have basic safety systems including life rafts and have redundant communication systems to radio the friendly outside world for help.

Supposing the cruise ship manufacturer's salesman did propose a redundant power plant safety feature (or a similar safety feature) to a customer at one time it would go like this:

Vendor: Would you like us to add a partition to the generator room for power plant redundancy?
Customer: How much will it cost? and how much will it increase my operating cost?
(3 months of engineering later) Vendor: 1.3M USD, estimated operating cost will be 230K USD/year in operator labor and maintenance.
Customer: Says "okay", sends it to the accountants and insurance providers to crunch the numbers.
(6 months later) Accountants: Based on the statistical likeliness of the generator room flooding from a collision, the insurance company offers a 3.6M USD annual premium collision insurance WITH this feature and a 3.7M USD annual premium collision insurance WITHOUT for a savings of $100K USD/year. As such, the finance team unanimously advises to forgo this redundant safety feature.

All of that said, in light of this wreck, you will likely see future ships with new fail-safes and redundancies in place for this and other failure modes. This is because:

Not the answer you're looking for? Browse other questions tagged safety marine-engineering ships or ask your own question.

1
What mechanism in the radar that enables the switch between transmission and reception?
2
What (if any) are the engineering limitations for producing "simulation" exoskeletons
0
Is the metacentric height independent of heel angle?
2
What are the 'poles' off the side off this aircraft carrier's flight deck?
2
Computation of the moment of restoring forces for a floating vessel
0
How to calculate the force required to tip a floating dock