Two different HPU systems in different locations with slightly different oils Chevron Ranco HD 68 and HDZ 68 have the same minimum oil temperature 55. Their flash points are are 455 and 414 F respectively. I wanted to know if the oil is a determining factor in the minimum temperature or if the system itself is more critical in this design point.

If it is the HPU, I was curious as to what factors go into determining this value.

Any help is greatly appreciated. Thanks!

I don't design HPUs, but I'm a mechanical engineer now and have previous experience with them. I would guess that the oil viscosity is the primary driver for its minimum temperature. Below the rated temperature it'll start to solidify or gel and form something more akin to grease or gear oil than a hydraulic fluid.

The viscosity of the oil will have an impact on the system because it'll affect the pressure loss per length of supply hose. The HPU should be rated to supply the specified pressure at some maximum flowrate, plus some margin. That HPU specification should take into account the hose diameters and lengths, etc., to achieve the nominal operating pressure at the hydraulic actuator.

If you run the wrong grade oil, or use it at a lower-than-rated temperature, the oil will essentially congeal, clog the hydraulic hoses, and then you're not going to get the appropriate pressure at the actuator(s) and/or you'll blow a hydraulic hose or lift a relief valve because the HPU is overloaded trying to push that thick oil through the system.

It kind of feels like you're asking if you can use one oil in both systems because they both have the same minimum temperature, and I would caution you against that. You should contact the manufacturer and have them tell you whether or not it's acceptable, because again the system will be designed for some specific viscosity, and the viscosities of the oils may be different at the minimum temperature. What's an acceptable viscosity at 55 for one system may not be acceptable for the other system.

More than that, there may be other characteristics that the oil is specified for, such as corrosion inhibitors, pH, hose/seal compatibility, etc. I looked briefly at the difference between HD and HDZ and saw mention that HDZ is a multi-grade oil, which brings up another good point - viscosity stability. The flash points may also be similar, but the amount of lubrication you'll get as temperature increases may be different. One system may be designed such that it doesn't get very hot and doesn't need to keep its viscosity at higher temperature ranges.

The pour point of standard ISO32 hydraulic oil is around 40F (4.5C) depending on additives. Below that temperature the oil behaves like a semi solid rather than a linear-viscous fluid. Forcing the oil through pumps / valves / elbows / lines requires far greater pressure differential, as Chuck's answer noted. Typical measurements of viscosity stop around 0C for that reason. Lower ranges become increasingly difficult / impossible to measure. 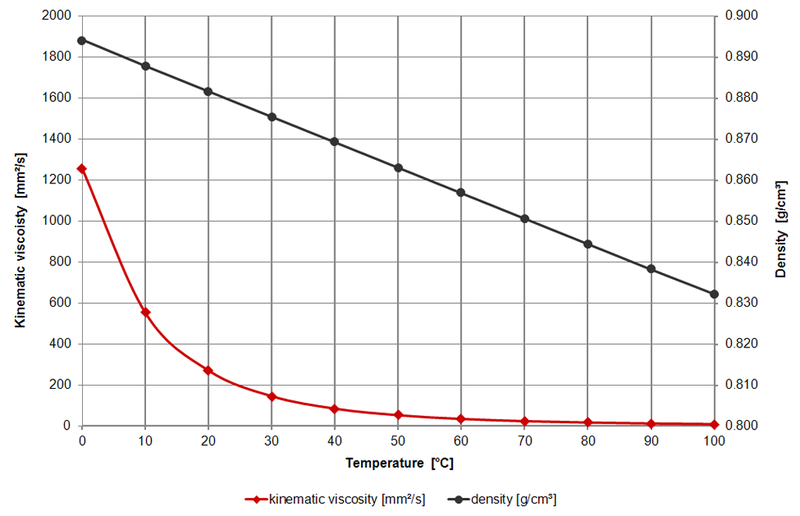 Not the answer you're looking for? Browse other questions tagged hydraulics mechanical or ask your own question.