Can a beam be too short to experience bending stress?

The question in the title says it all. I've got a a configuration where I'm using a bolt to support a load. The way its set up, the bolt will have a very short cantilever on it. When I calculate the bending stress in the bolt, it is over twice the yield stress for the material. The calculated shear is quite low. A similar configuration has been done at our plant in the past with no issues. So this got me wondering if there is a point at which bending stress is not applicable. If it was applicable, clearly the bolt would have failed the last time this operation was completed.

*edit: I have attached a sketch. It Though there might be a generic rule about length of beams when bending might not apply.

*There is a machine called a tugger which is an electric motor with a reel. It is used to pull long heavy lengths of cables out through conduit. It will be placed on grating that is supported by c-channel. A threaded rod will be attached to the tugger and one of the c-channel will be used to hold the tugger in place as pulls the cable. The second threaded rod (on the left in the image) along with the lower support piece are merely to hold the rod in place that will take the load. My assumption in that all the load will go to the cantilever shown in detail A. Again this has already been done with no issues. I'm new at the job and have some free time so I wanted to actually try the calcs. Current engineer just "knows" these things.

**I mistyped when I said the bending stress is twice yield. I meant to say it is twice the allowable. 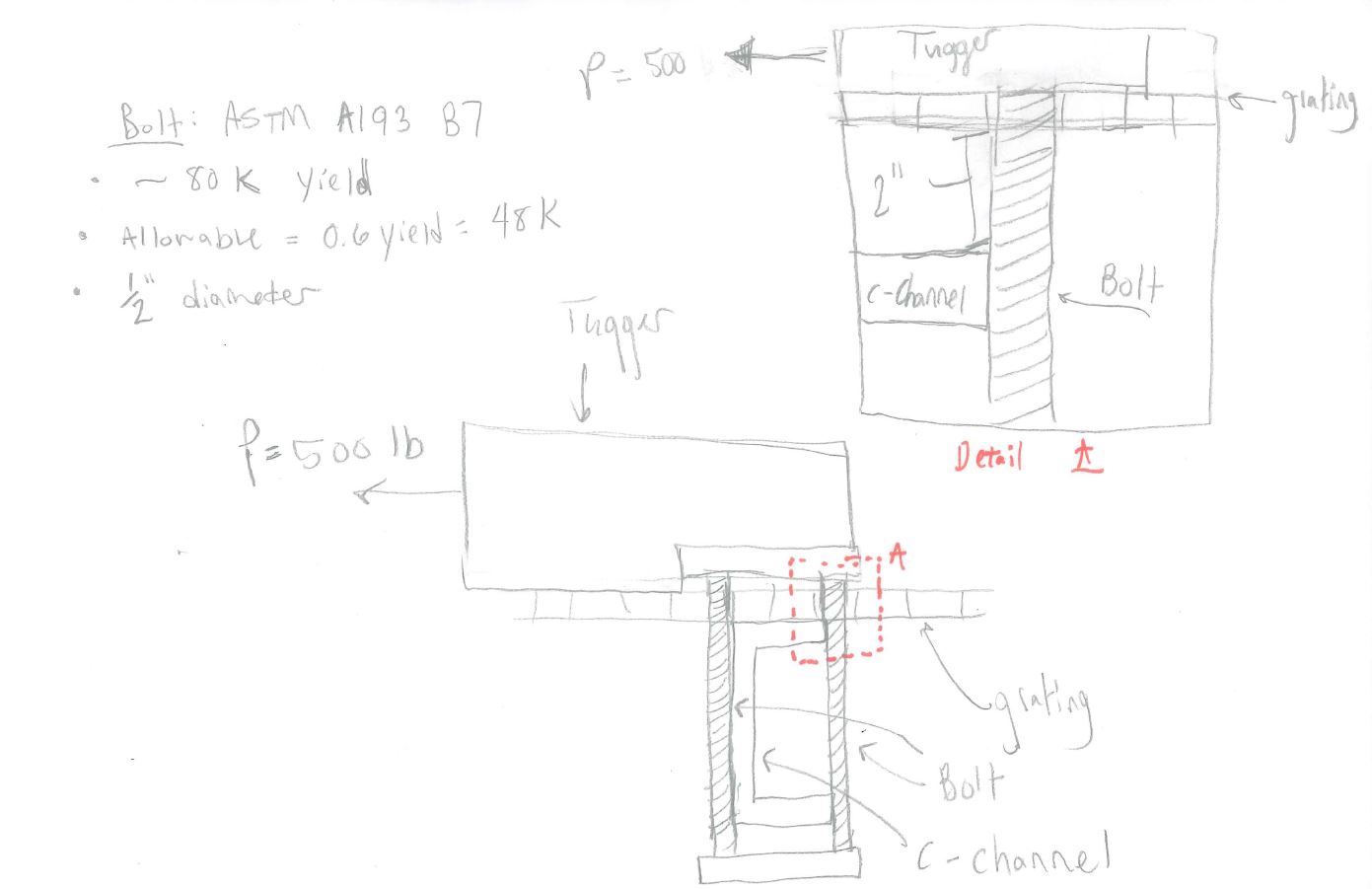 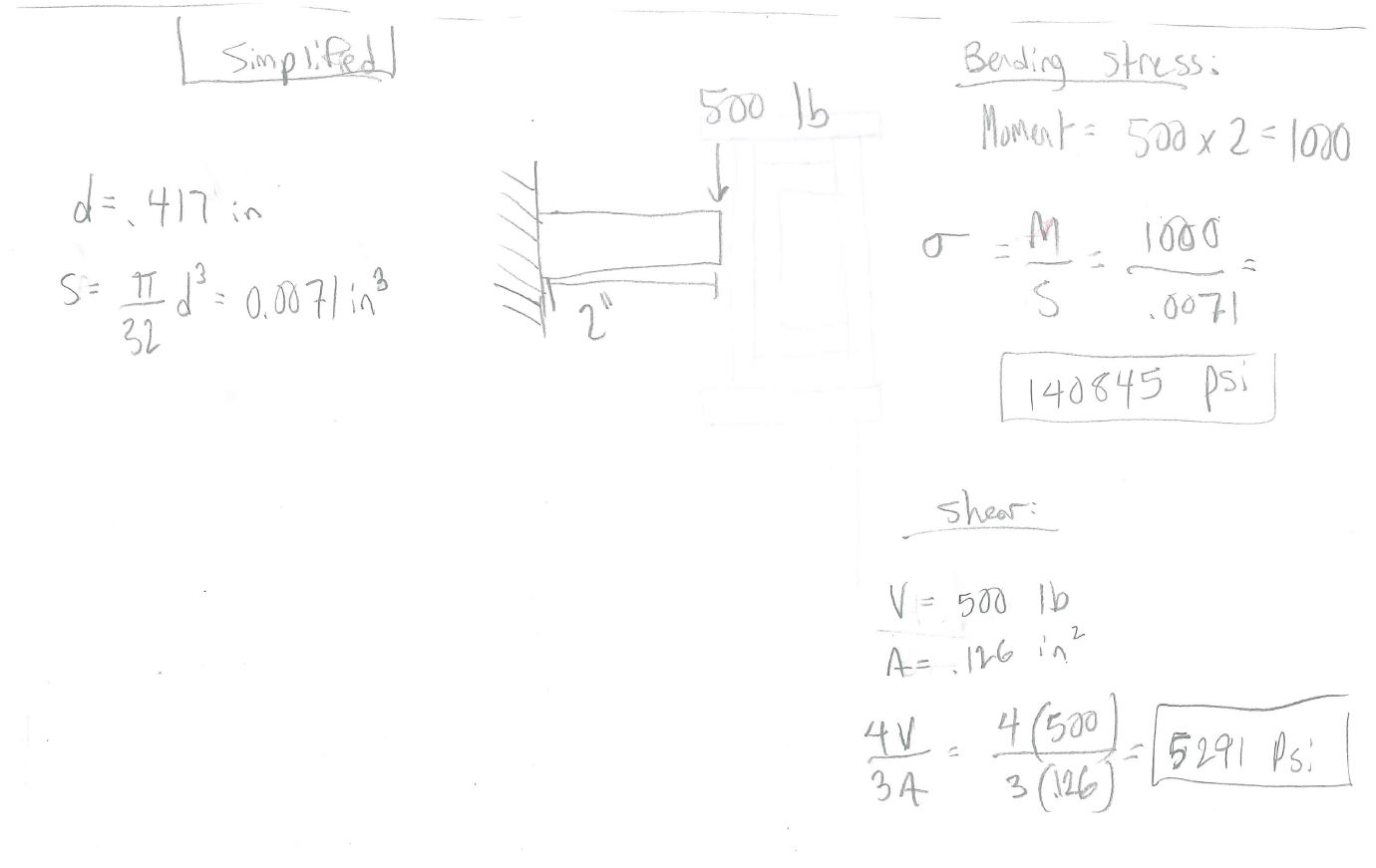 This sketch is traced off from yours, you may update any missing/incorrect details. However, my impression is you were calculating the forces on plane a-a with the force applied as shown. For such a case, the bolt acts as a shear lug/pin and subjects to shear force only, no bending will occur or only with a negligible amount of moment resulted from the force times half of the top plate/element thickness, which is usually ignored unless the force is applied directly to the embedded part of the bolt. 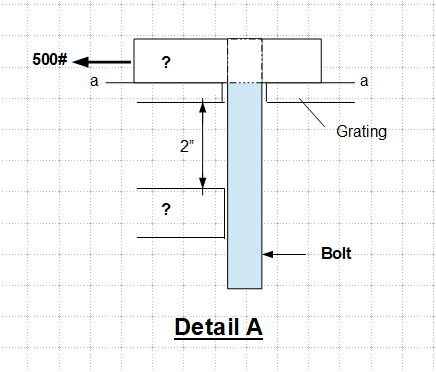 The equation for simple bending (I assume that is the one you used) has certain assumptions in order to be valid.

The following is an excerpt from learn about structures

The plane sections remain plane assumption is illustrated in Figure 5.1. It assumes that any section of a beam (i.e. a cut through the beam at some point along its length) that was a flat plane before the beam deforms will remain a flat plane after the beam deforms (i.e. it will not curve out-of-its-own-plane as shown in the lower right image within Figure 5.1). This assumption is generally relatively valid for bending beams unless the beam experiences significant shear or torsional stresses relative to the bending (axial) stresses. Shear stresses in beams may become large relative to the bending stresses in cases where a beam is very deep and short in length.

The beam theory is generally applicable for beams of aspect ratio greater than around 5–10.

In your case because the diameter is 0.4'' and the span is about 2'', the aspect ratio is about 5, which the limit at which you can safely use Euler-Bernoulli beam theory (to be perfectly honest I wouldn't use it)

Not the answer you're looking for? Browse other questions tagged mechanical-engineering applied-mechanics statics stresses beam or ask your own question.

3
Precise rotational movement and locking
2
How to calculate strain from maximum bending moment and stress?
1
Evaluating replacement pulley axle strength
6
Fragmentation of a curved cantilever beam under compression
1
Trying to shed some weight on my design, any thoughts?
1
Installing satellite dish to point to local zenith
2
How to solve this linear motion problem?
0
Maximum induced bending stress within the beam