Is an axial force applied at the centre of a beam considered a compressive force, tensile force, or both?

I was looking through some course notes and realized that I never fully understood this concept. So, looking at the diagram below we can see that there is a 20kN axial force being applied in-between sections (1) and (2).

Am I interpreting this correctly? Any help/insight would be really appreciated!

Edit: Another way I was interpreting this was, if I were to scan, starting from the leftmost side towards the right. I would initially see a compressive force onto the beam from R, then, I would see compressive forces (by using the section method at point 1). However once I am coming up to the 20kN force, I would, from my perspective, see a 20kN force being applied towards me, and from my section's perspective this would be compressive (-'ve force), so shouldn't I go down in the Force/distance chart? Since -'ve forces are compressive and +'ve ones are tensile.

Edit 2: Looking at some more Youtube videos: https://www.youtube.com/watch?v=Q7kYdDNKE8E, it looks like what happens at the point of force application isn't exactly necessary. Mostly we just calculate the force in-between everything, and just simply connect the lines.

I think your big misunderstanding is in this paragraph:

[...] if I were to scan, starting from the leftmost side towards the right. I would initially see a compressive force onto the beam from R, then, I would see compressive forces (by using the section method at point 1). However once I am coming up to the 20kN force, I would, from my perspective, see a 20kN force being applied towards me, and from my section's perspective this would be compressive (-'ve force) [...]

It's important to remember that the sign convention for internal stresses depends on the face you're looking at: a force is tensile if it's to the right on the right-hand face or if it's to the left on the left-hand face.

If you choose to go from left to right (as one usually does), then you obviously must only look at the left-hand face of the element. After all, you don't know what's going on to the right of the element, only to its left.

So, we start at the support, where we see the left-hand face receiving a rightward force. Looking at our sign convention, that's negative (compressive). So far, so good.

We then keep moving right until we reach the free end with the 10 kN force applied. Once again, we'll only notice that force once it's reached the left-hand face, at which point we'll once again have a rightward force on the left-hand face, which means it's negative (compression). Adding that to what we'd already accumulated, we get the expected zero force at the free end.

Going from right to left will give the same result, so long as you remember to always look at the right-hand face instead.

* The term "moved past it" is merely metaphorical: remember, the element of the sign convention is infinitesimal!

Technically a force on a structure is neither compressive nor tensile.

The effect a force has on a structure or the internal reactions can be characterised as tensile or compressive.

So in the following example in all cases there is a F force on the right. Then only difference between case A and case B is that in case A the support is on the left, while on Case B is on the right.

Notice that the force has not changed direction in the global Coordinate system. The only thing that changes is the support, and (even in this simple example) suddenly you have compressive forces, instead of tensile.

In the same manner, if the force was placed in the center of the beam, then the equivalent diagrams would be as follows. 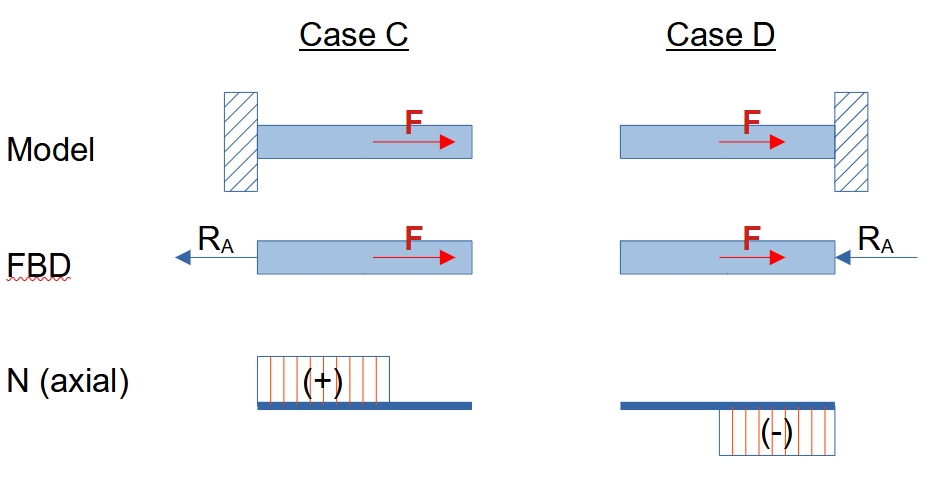 Again as you can see, the direction of the external force F is horizontal to the right, however, the internal reaction is in one case tensile, and in the other (D) compressive. Additionally different parts of the beam are affected.

So, IMHO this is the most important thing that you need to take away from this.

Disclaimer: This is my interpretation based on how you expressed your question. I felt it necessary to point this out, given that Wasabi answered from a totally different perspective (which is entirely valid), I realize that I might have misinterpreted your question (your feedback will be very useful to improve my/our answer).

Conventionally, structural diagrams (V, M, T) are drawn from left to right. In the case of the axial force diagram, we need to set up/state the sign convention then draw the diagram accordingly. (Note that it does not matter where to start drawing, the diagram remains the same, as it must conform to the stated sign convention.)

Your question in the subject title can be answered by the method of superposition as shown on the diagram below - a "20 kN compressive force" was added to the rod that was subjected to 10 kips tensile force... 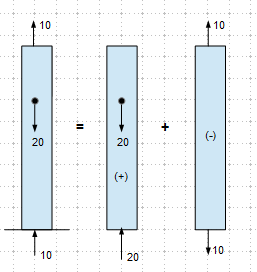 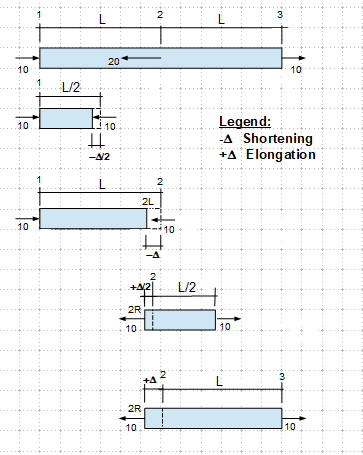 3
Design a beam that is straightened with force on one end
1
Buckling of a cantilever with midway support
1
How to calculate area of cross section needed to sustain a point load on a beam?
5
Shear Force Diagram of a Simply Supported Beam with triangular load distribution
5
How to draw a shear force diagram when two forces are acting at the same point
1
How to check if bending moment diagram is correctly drawn
0
When we replace supports distributed reaction by point reaction in thin beams, is that considered an application of Saint-Venant principle?
0
Modeling the Internal Forces Exerted on a Catapult Arm while Throwing
0
How can I understand shear flow in a beam cross section?