Difficulty in understanding the scenario for this Q

Q:If a closed rigid wall container filled with 20 gm of He moving at a constant speed of 10 m/sec is stopped abruptly to stand still, find the increment in temperature of this He sample.

My question regarding this problem :

Theory 2:Also , I read online about this Q. It says that my thinking was wrong and what the Q means to say is that when the container is put to stop. There will be collision inside the container which causes the increase in temperature.

Below is how I solved:

I found kinetic energy which has to be W or macroscopic work done. Then , we have q and $\delta$E left.

q must be 0 since it is a closed container. Therefore , in end . We just equate W and $\delta E$.

Main Q is that which theory is right and is my method of solving above correct ?

One basic notion behind this is that temperature of a substance is defined as the average kinetic energy of all the atoms or molecules of that substance. 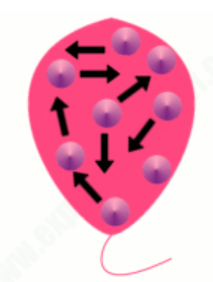 What I am trying to stress is that

The temperature is the average kinetic energy of the molecules .

So, in the problem the idea is that the kinetic energy of the balloon ($E= \frac 1 2 m \cdot v^2$), is converted into heat energy, and increases the temperature of the molecules in the balloon. So basically you need to equate:

At the instantaneous moment of stopping the Container, there will be a rush of the molecules of the rear end to the front end. After some time, $\delta t$ this rush will cause extra pressure on the front of the container and less pressure on the back of the container until there is an equilibrium and the rush stops. Therefore at the time $t= \delta t$ there are stratified strata of higher temperature at the front end and lewer at the end assuming He as an ideal gas.

This imbalance in the pressure will cause a rush back of the molecules of the He to the end and start a damped cyclical change of pressure and temperature at the two ends of the container.

The damping effect will give rise to an increase in the temperature of the container after some time.

Not the answer you're looking for? Browse other questions tagged mechanical-engineering thermodynamics heat-transfer heat or ask your own question.

1
What does it mean by average kinetic energy of molecules as temperature?

1
How does pressure energy convert to thermal in incompressible flow?
5
How to simulate car acceleration
3
estimating the surface area of a steam coil immersed in a tank
3
How high will a flywheel catapult launch a payload?
2
Why does accuracy of temperature PID controller drop over time and how to eliminate it?
16
Why does temperature not increase by putting more logs into the fire
1
What is heat , chemical energy and thermodynamics laws restrictions
0
Can I consider this scenario for the phase change of $H_2O_{(s)}$ to $H_2O_{(L)}$
2
Converting kJ provided to a closed system into final temperature of the system
0
Difficulty in understanding electric heater Q relating to its power