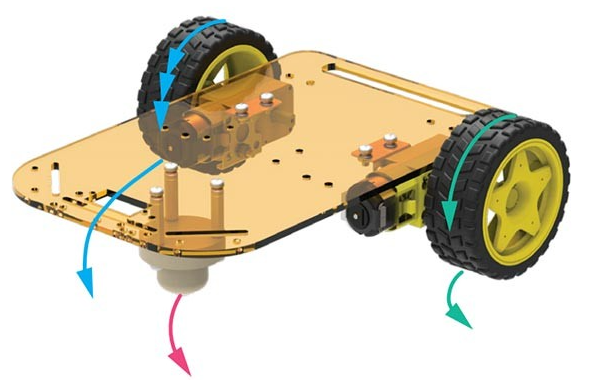 So far i have three equations (one along x and one along y, one about torques with respect the center of mass) and 7 unknowns.

In order to solve the system, should i disconnect the system (wheels and platform)? How can i solve it?

Equations about x, y and torque with respect the center of mass (positive if clockwise):

Active right/left wheel (after i broke up the system): 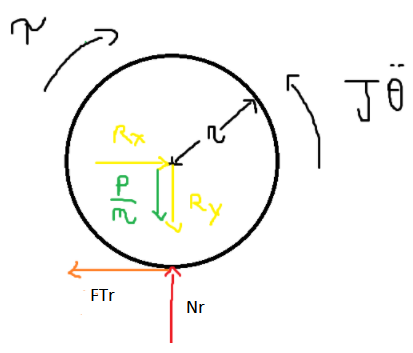 Rx = reaction force between platform and wheel about x axis

Ry = reaction force between platform and wheel about y axis

The first thing I can see is in your $M\ddot{x}=\Sigma{F}$ equation as well as your free body diagram. You are confusing the force being exerted by the wheel with the force exerted on the robot. Free body diagrams only show the forces exerted on the body, not forces the body is exerting. The drive wheels on the robot exerts a force in the negative direction (left) on the ground. The ground then exerts an opposite and opposing force on the wheel via in the positive direction (right). That's what moves the robot forward.

Of course, you could have guessed that acceleration is to the left in which case you would draw the vector as you have. Your calculated acceleration would be positive (which we just know intuitively) which means that you guessed the wrong direction and the acceleration is to the right. We won't always know ahead of time what the directions are so what you drew is not necessarily wrong, but the problem in this case is simple enough that we do know so I can only assume you are misunderstanding something.

Alternatively, you could list all unknowns as being positive regardless of which direction you think is correct. In that case, the polarity of the result will give you the direction. You could also do the opposite and define the unknowns as all in the negative direction. In that case, it would be like guessing all knowns are in the negative direction so a positive result would mean you guessed correctly and a negative result means you guessed incorrectly.

For your wheel FBD, you are again mistaking the force that the wheel exerts on the ground with the force that the ground exerts on the wheel. The things I have to say about the direction you defined $j\theta$ definition follows the same logic as what I said for $ma$ above. Typically in the x-y coordinates CCW is defined as positive due to cross product. The best case scenario for how you defined $j\theta$ would be if you followed the cross product convention and just assigned all unknowns to be positive so that they polarity would give you the direction then that would be correct.

But if that's not what you intended then you took the unusual convention of guessing in a strange direction when your intuition knows better similar what I described above for ma. In this case, you guessed CCW then your calculated $\theta$ would be negative indicating the rotation is actually CW, opposite of what you guessed.

You need to check that your Rx direction is what you intended. Because when rolling to the right, the axle exerts a force on the wheel hole to the left.

You're double counting the weight of the robot on the wheels by having both inertial load and $R_y$.

Not the answer you're looking for? Browse other questions tagged mechanical-engineering applied-mechanics dynamics or ask your own question.

6
What is the equivalent moment of inertia of a two-pivot pendulum?
5
Calculating torque needed to climb a graded hill
1
Find the load applied to each wheel by the anti-roll bar
0
Deriving the equations of motion for free-floating spacecraft with a single link robot arm
0
How to calculate traction force w.r.t. rotational speed of a shaft mounted at a certain angle on a surface?
2
I have the yaw rate, rear wheel speeds, and the radius of tires, how to find x and y speeds?
0
How to solve this Question regarding compound accelerations
1
Trajectory of the center of mass of a vehicle
0
Find minimum horizontal force required to keep the block and wedge stationary?