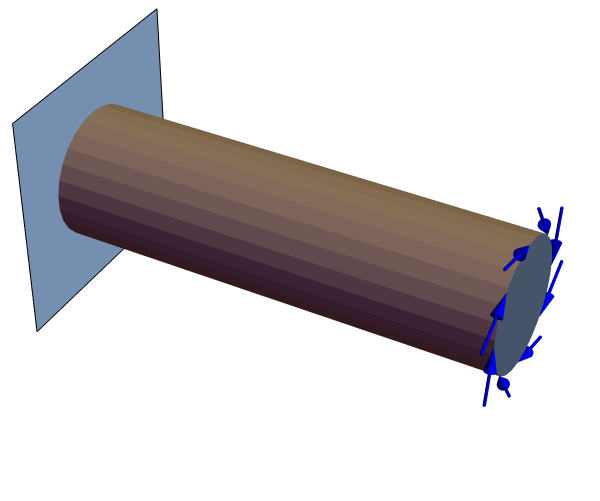 A reference solution for the maximal displacement suggests it should be around 0.1103 [mm] and the maximal von Mises stress should be about 103.6 [N/mm^2]. In this Solidworks tutorial the same thing is done, but with different values than the reference I used (which is also based on a Solidworks example).

The problem I have is that the finite element simulation tool I use does not have a direct way to specify a torque as a boundary condition. One can, however, specify a boundary surface pressure. I'd like to convert the given torque into a surface pressure. Here is how I did the conversion. I created a vector field that gives the direction of the pressure load in the $x$, $y$ and $z$ direction and converted the torque value into a pressure. As a vector field I used:

A plot of the vector field looks like this: 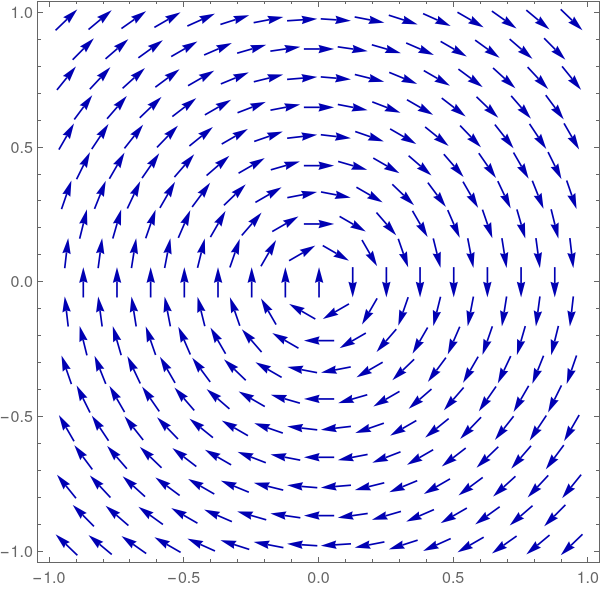 where $M_t$ is the given torque value. I would like to convert the torque into a force by dividing the force by a length. The $q$ is the part I am uncertain about what to use. I tried $q=\sqrt{y^2 + z^2}$ such that it gives the radius to the axis but that does not give correct values. Then I divide by the area of the surface to get a pressure.

I think I am making a mistake in the conversion. If someone could point me in the right direction...

Here is a different approach: Based on this we start from

where $J_T$ is the torsion constant, $r$ the radius and $\tau$ the maximum shear stress. We solve for $\tau$ to get

The torsion constant can be computed with

A plot of the von Mises stress: 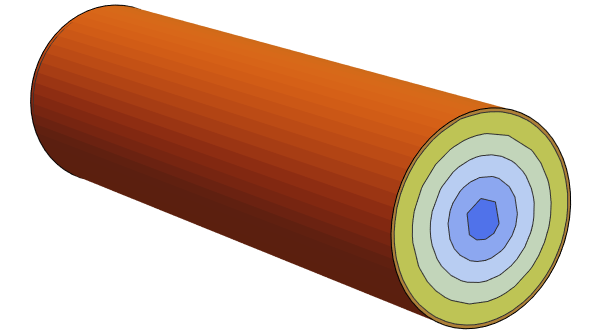 In principal, I think, this approach could be used for other surfaces, then one would need to compute the area moments of inertia for those surfaces.

I'll hazard a guess. From what I undestand what you are after is given a specific torque - I'll call it $M_t$ (instead of $F_t$)- you want to calculate what is the uniform pressure that you need to apply on the face of a cylinder to obtain as a result $M_t$.

Assume a thin annular stripe at distance r with with dr. 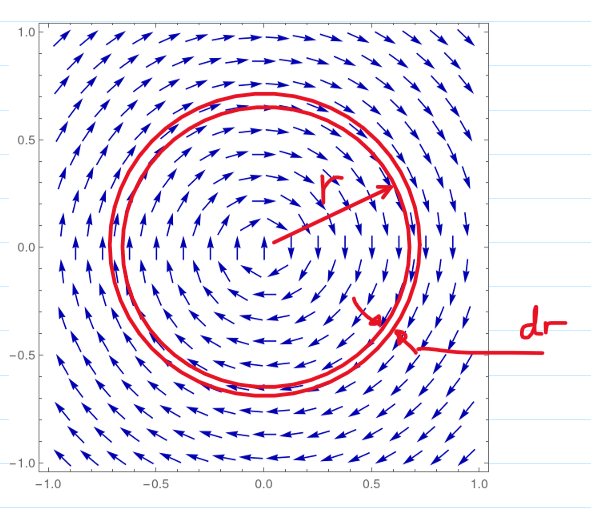 Assuming a constant pressure q [$N/m^2$]is applied, the total force on that stripe is

The torque of that thin stripe $dM_t$ will be

Then the magnitude of the constant pressure $q$ should be:

Not the answer you're looking for? Browse other questions tagged finite-element-method modeling simulation or ask your own question.

8
Can two different modeling programs be used to confirm the results of each other?
8
Simple Finite Element Modeling of Wall Piers
0
Thermal Modeling
0
Modeling the stiffness of a membrane
2
Modeling the torque of a real motor
1
Thermal Capacitance - Convention for Modeling of Electrical Equivalent
1
Modeling a simple capacitor