How to guess direction of friction in any case

Here , in case of a death well situation as an example.

Q How is direction of friction going to be opposite to mg or in upwards direction ?

Similarly , there are many situation in which it becomes difficult to guess the direction of friction. For example , banking of road , vertical circular motion of a car or bike.

Especially in cases of banked raids, direction of friction changes as magnitude of velocity changes .

Also, it is important to note that there does not have to be actual sliding. Even if there are resultant forces towards a direction, which could cause sliding, then that force direction could be considered the direction of sliding (actually you would have had sliding if not for the friction).

Q How is direction of friction going to be opposite to mg or in upwards direction ?

mg would move the bicycle downwards (ie. it would slide against the wall if there was no friction.

Why not: In case of like circular turning , direction of friction is toward the centre. Why is it not the same here ?

In circular turning the reaction is vertical and unless there is superelevation does not contribute to turning. In the death well, the reaction from the floor is what actually turns the motorcycle.

Online it says that when f=mg , then only net force is towards the centre. How is that possible ? Normal is pushing the bike. How is it still on the track then if f and mg cancel out.

The normal force is the net force and from Newton's laws:

For a constant velocity, the only acceleration is the centripetal acceleration. So the normal force from the side of the death well is what keeps the motor on track.

This statement is completely wrong. When a wheel is turning without sliding then there is no friction. In order to visualize this consider the following. Imagine you are pedaling with a bike on a flat surface, then stop to pedal.

The keys are 1) the wheel must in contact with a surface, 2) having the noraml force pushing it against the surface, 3) the friction is always in the reversed direction of the motion.

In the case shown in the picture, there could be no friction because conditions 1 and 2 above do not exist. Or there could be two frictional forces, one pointing backward against the direction of motion, and one pointing up against the inertial/gravitational force. This phenomenon happens on cars running on a curved road with superelevation towards the center, the side friction is pointing toward the center to resist the centrifugal force that tends to throw the car out of the driving lane.

Friction is the resistance of instantaneous bonds between the molecules of the two contact surfaces against their sliding.

Any effort or force trying to slide one of the surfaces against the other will cause a reaction exactly equal and in the opposite direction of that force. (static friction)

This static friction will keep increasing equal to applied force until it becomes greater than the bond between the two surfaces.

When this force exceeds this level the bond will break with a sudden jerk and the two surfaces will slide against each other with less resistance, kinetic friction. 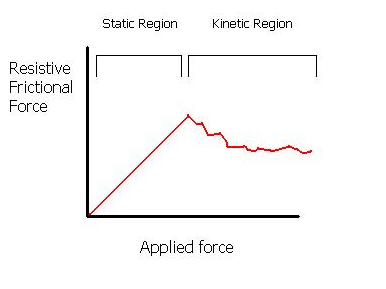 Not the answer you're looking for? Browse other questions tagged mechanical-engineering civil-engineering applied-mechanics friction or ask your own question.

7
How can I improve traction on a wheeled vehicle yet reduce friction?
4
Looking for advice on design of some rollers
1
Cascaded ball bearings
2
Calculating Bending Force on a Fixed Metal Plate
1
Condition for equilibrium of a rigid body on a horizontal surface
1
Criteria for gear design
2
Would a car slip down on a frictionless banked road and situation for friction road
0
Effect of centripetal acceleration on angular acceleration