The differential equation for wheel speed can be given as:

In here, $T_t$ is driving torque (not braking), $F_x$ is longitudinal force of tyre, $J_w$ is wheel inertia, $\dot{w}$ is angular speed of wheel and $Frolling$ is rolling resistance force.

According the equation, if we increase the resistance force, $\dot{w}$ should increase. Increasing of angular speed may cause higher slip ratios. As long as longitudinal slip ratio increases, it is possible to have higher longitudinal tyre forces according to Magic Formula.

In here i have a confusion: High rolling resistance makes possible to have higher longitudinal force according to this differential equation. How can it be possible? How can $F_x$ increase with higher values of rolling resistance? If $F_x$ becomes high, it is impossible to decrease the vehicle. With the help of the positive and high $F_x$ force, vehicle cannot decelerate.

A way to look at this is the following:

The rotational speed of a wheel will increase if the torque $T_{tij}$ supplied is greater that the total force from the ground. 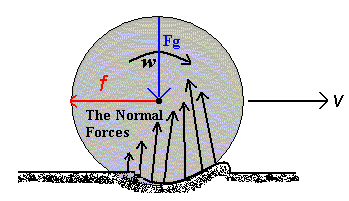 Figure 1: presents the forces and the deformation of the wheel and the surface source: Physics SE

Which basically means that

if the supplied torque is greater than the total of the resistances then the wheel will accelerate.

In the following images you see the forces in question (wheel is moving towards the right): 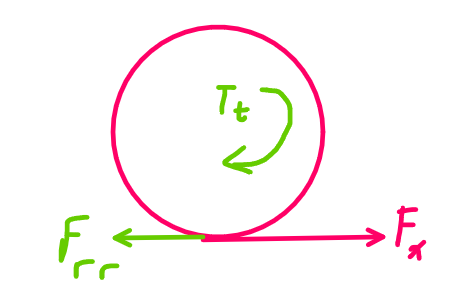 When the vehicle is not accelerating then $F_x$ will be equal to the remaining resistances (e.g. aerodynamic and inclination). Remember that $F_x$ is the force that the surface of the road applies to the wheel (as a reaction).

When the vehicle is accelerating then the total resistances will be less than the torque.

This is an interesting question. I am not an automotive engineer, so please correct me if I am wrong.

The rolling resistance is a contact force with direction in reverse to the applied force, which in a sense drives up the demand of the driving torque, otherwise, the vehicle will not move forward. 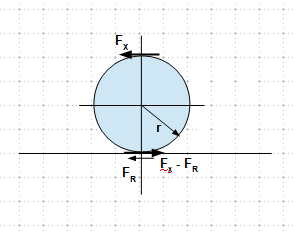