Can anyone help inform a discussion I'm having with fellow modellers on a model railway forum?

I have a locomotive powered by an electric motor turning a 20mm diameter worm gear meshing with a spur gear. The loco performs badly, it lacks power. I am planning to exchange the worm gear for one which is 6.5mm diameter as I'm convinced this will increase the amount of force the motor can exert on the spur gear.

Some on the forum say it will make no difference - one rotation of the worm will move the spur gear forward by one tooth and the effort needed is the same regardless of the diameter of the worm gear.

I've tried supporting my argument with rudimentary physics but I'm confused as to whether i use formulae associated with rotational inertia, torque or centrifugal force. None seems to be directly applicable.

Assuming all other factors are constant, how do I calculate the force needed to turn the two sizes of worm gear?

Even though the spur gear tooth is moved by one rotation, there is a force associated with it which is related to the friction (or in general the load on the spur gear).

To simplify things, let's assume that the system is in steady state (i.e. no angular acceleration). In that case you don't need to worry about inertial effects.

The tangential component of the force on the worm gear $F_{w,t}$ will be equal to the spur gear $F_{s,t}$.

The following image shows the forces that are developed on the worm gear. 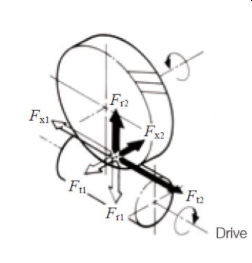 It is impossible to have a worm gear pair mesh without radial and axial forces. However,
the other forces (radial $r$ and axial $x$) will be proportional and will be depended on the angles of the worm gear.

However, now the torque required to keep the system moving would need to be equal to (actually its higher due to losses but to simplify things let's assume no losses):

So in the end:

So as you can see, increasing the diameter will result in higher torque requirements.

1
Finding the diameter of a Triple Thread Worm Gear
2
Calculating the amount of teeth on ring gear in planetary gear system
2
Calculate proper stepper torque to convert clay extruder from compressed air to leadscrew actuator. Is this the correct way?
0
Does gear diametral pitch have to be an integer? (teeth/diameter)
1
How does gear reduction affect a stepper motor's holding torque?
2
Reduction System for Gate-opener motor
2
How to calculate the moment of inertia of a worm gear?
1
Attaching Gear onto Motor
1
How to I determine the dimentions for a worm gear?