Why are both conductors in a High Voltage Direct Curent powerline isolated from ground? 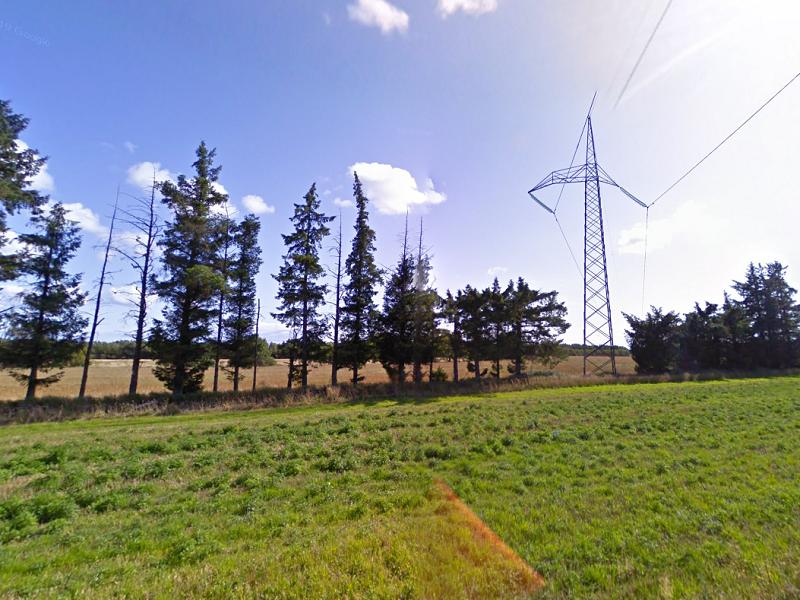 We can observe that there are 2 conductor cables, and that both are insulated from the tower (which is grounded). Because the line is in DC it makes sense to have 2 cables.

Grounding one of the conductors on the HVDC line might save money on isolators, not to mention electric and safety issues if the HVDC line as a whole recieves a too large voltage offset compared to ground.

Because they're both live

Just because you see multiple wires doesn't mean they are carrying different things. They are frequently paralleled for more ampacity.

It's perfectly common in HVDC lines to use earth as the return path. For instance, the Pacific Intertie does just that, with absolutely massive grounding electrodes at each end.

The grounding system at Celilo consists of 1,067 cast iron anodes buried in a two-foot (60 cm) trench of petroleum coke, which behaves as an electrode, arranged in a ring of 2.0 miles (3,255 m) circumference at Rice Flats (near Rice, Oregon).

The Sylmar grounding system is a line of 24 silicon-iron alloy electrodes submerged in the Pacific Ocean at Will Rogers State Beach[5] suspended in concrete enclosures about 2 to 3 feet (0.5 to 1 m) above the ocean floor.

In that case, the multiple wires on the pole are all live, typically configured as redundant paths so the route is not entirely downed if one wire takes a hit.

The Konti-Skan HVDC line you are talking about does exactly the same thing, although it varies, using a number of methods. In some places it does carry the ground wire on the towers, but on top and insulated from the towers.

The multiple conductors are either redundant or have different destinations.

There are a few possible reasons.

Grounding one of the conductors on the HVDC line might save money on isolators, ...

... not to mention electric and safety issues if the HVDC line as a whole receives a too large voltage offset compared to ground.

I'm not too sure what this means. Clarify and I'll try to answer.

Have another look and I think you'll find that there is a dedicated ground return wire on all systems bonded periodically to the track. Corrosion of buried metal pipelines (water and gas), bridges, tunnel linings, etc., is a major problem that railways have to avoid. This would be a similar problem in an earth return system.

Not the answer you're looking for? Browse other questions tagged electrical-engineering power-transmission electrical-grid or ask your own question.

4
Why shouldn't we put high voltage cables physically underground?
16
What is it about the cabin electrical supply on cruise ships that makes surge protectors dangerous?