Why does the 1kg mass move towards inclined plane here? 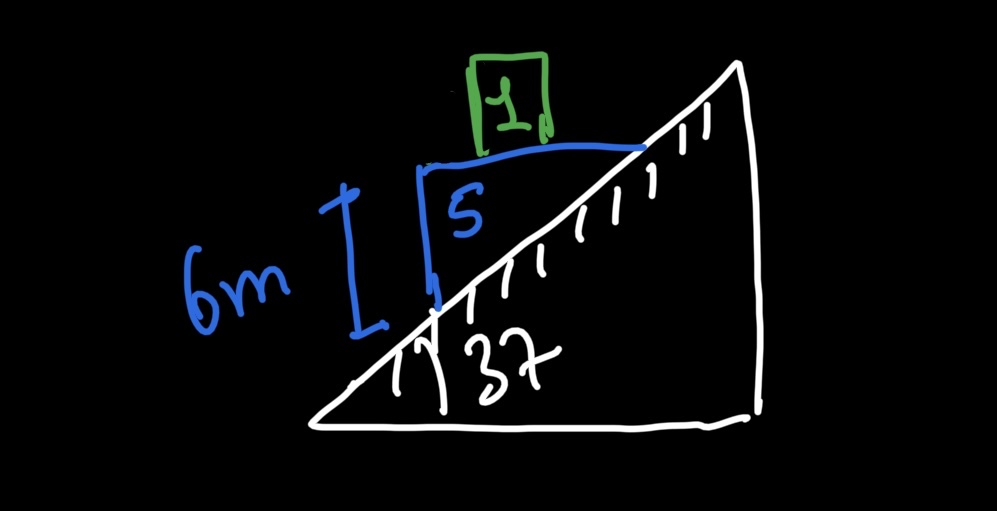 EDIT: In the book , it doesn’t say friction has to be present but as PeteW has mentioned , i think it should be necessary too. So , in that case let me take two cases. One when friction is present between 5Kg and 1kg block and other when it is not. So , depending upon it. Check it.

The triangle wedge (white color) is always fixed. The blue color wedge of 5kg moves down and so does 1kg is given in Q.

So , the main question to find the time when 1kg block touches the inclined plane. Assume in one case a inertial frame and in another , any non inertial frame of your own choice.

My main confusion is that how do we know if the 1kg block will move towards right direction. It can be left or no direction also.

If I draw the FBD for 1kg block , it has N from 5kg which cancels out due to its mg=1g. So , there is no external force to make it move right.

If you are asking why does the 1 kg mass (I'll denote it as $m_1$), moves towards the inclined plane, then IMHO the exercise you shouldn't have any friction. 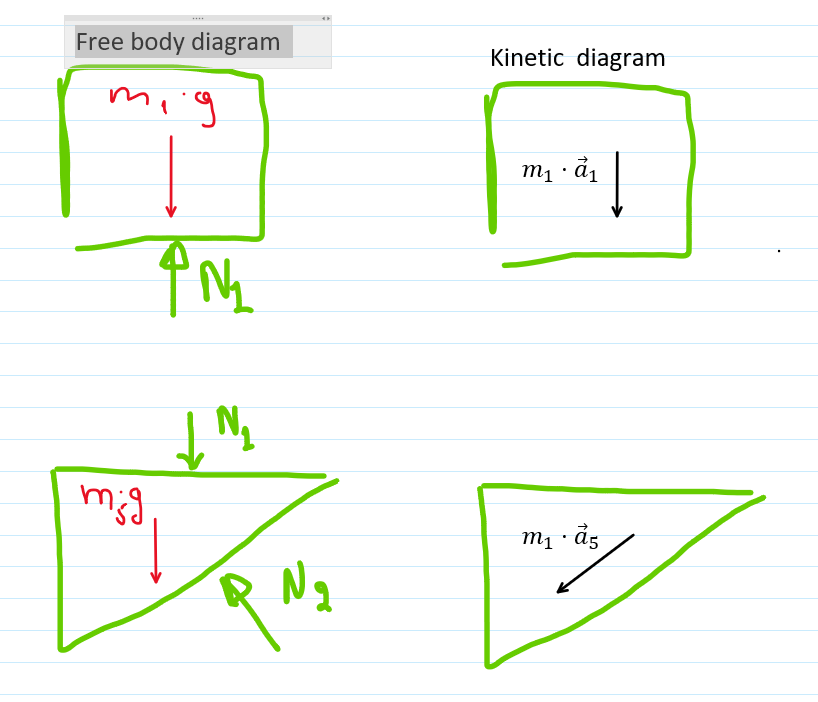 The acceleration of mass 1 will be downward, while the wedge will accelerate in a direction along the plane.

If you are asking about the forces, then in order to calculate the reactions and the acceleration you'd have to solve the following system

I'll leave the numerical solution to any interested party.

The acceleration of the wedge S is

And the I kg block will move to the right with the horizontal component of this acceleration because it insulated from the ramp, it just tends to stay in the same x coordinate by its inertia.

And its horizontal acceleration from the frame of reference of the wedge S is,

However, its horizontal acceleration in the frame of reference of the ramp is zero.

to make an intuitive illustration the 1kg mass will behave as if:

it is dropped into a free fall near a hill with 37 degree slope in a planet with a gravity of 5.89/ 9.8 of the earth. It falls straight down till it crashes on the side of the hill.

Not the answer you're looking for? Browse other questions tagged mechanical-engineering applied-mechanics kinematics or ask your own question.

0
Aren't there infinitely many orientations some given gyroscope angles could represent? (Generally understanding gyroscopes)
0
Ball and Socket Wheel Concept
1
Cascaded ball bearings
0
Why is the tension on mass m1 not 2T here?
1
Find the acceleration of a block relative to incline plane in non and inertial frames?
0
Why is the acceleration of wedge and block equal like this
0
Find minimum horizontal force required to keep the block and wedge stationary?
0
Is there any frame of reference in which we can neglect the gravitational force?
0
Effect of centripetal acceleration on angular acceleration