Why doesn't the European Type F plugs use a regular earth pin?

Plugs and sockets tend to differ between countries. Though many different standards exist the vast majority have one thing in common: The pins (earth included) are attached to the plug.

However this is typically not the case in Europe. The French type E plug has an earth pin on the socket while the German type F (Schuko) has two earth clips. The Schuko standard dates back to the 1920s and just by looking at it you can tell that a lot of thought has been put into the design (and at least one patent by Siemens) .

What are the reasons for avoiding an earth pin on the plug? Or put differently; what are the gains of the added complexity of the Schuko?

While type E/F systems are very safe when used consistently, earthed E/F-plugs may unknowingly be used with some unearthed sockets (eg type C and K).

I suspect you are talking about the difference between these two 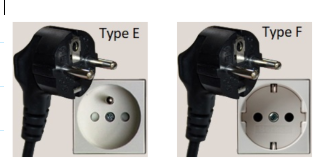 The main benefit of the F type is that it can be used at any orientation. So you can approach in two directions which are equivalent.

Analogy to USB An analogy to a more ubiquitous pattern is the USB Type A and B compared to type C. I don't know about you but I've had a few times the problem of trying to plug in a USB type A socket to a computer and then I had to turn it around (and then again around because I did it correct the first time, but the angle that I approach it was wrong). With type C that problem does not exist.

Another comparative benefit of the type F, is that the absence of the pin, makes it more easy to fit non standard plugs type C Plugs. (I've come across -once admittedly- slightly thicker type C that did not fit inside). 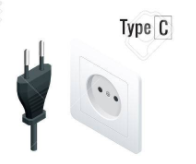 The advantage of type E over type F, IMHO, lies in:

The first safety point, is that type E compared to type F, can make the implementation of installation standards easier to adhere to. (it took me a while to think about this).

The reason is that one pin is neutral (N) and the other one is live (L), in the case of Schuko because you can approach the plug from different orientations, and you are allowed to plug it in both directions, there is not much point for the electrician to connect the L and N in a specific position.

However, in the case of the E type, because the earthed type devices will need to be approached in a specific manner, the electrician can always put the (L) in the same position with respect to the pin (I don't know if they do in those countries, but I suspect that they do). So, basically, if you know the standard (and even if there is no colour coding) you can tell which one is the Line and which is the neutral.

Using pin as a key

From a safety point of view, (although I am not 100% certain it is actually used often), is that the pin at type F, can be used to make accessible the pin plugs. I've seen that occurring in places with UPS supported systems. Basically to protect the UPS from a poorly connected device, they require use the earth pin as a way to "unlock" the other two pins. Since, I live in a country that uses F type, I don't know if this is actually used.

I now have an answer - and it is shocking! Source: https://www.plugsocketmuseum.nl/Schuko-origin.html (impressive article btw)

It turns out that type F (Schuko) and most likely also type E are deliberately designed to allow earthed plugs in unearthed sockets (such as type C). This explains why the plugs don’t have three pins.

I suppose this compatibility was deemed necessary in order to gain marked tracktion in the early days of “earthing”. Getting rid of all the unearthed sockets would likely take a generation or two, and in order to promote the production of earthed appliances this was a convenient compromise.

In either case; what I consider a potential hazard (earthed plugs in unearthed sockets) is really a(n outdated) feature!

23
Why doesn't a lightning strike destroy the lightning rod?
7
Switching batteries from series to parallel - technical solution
1
Why do identical-looking power plugs randomly not fit in some sockets in the same power strip?