How do suction cups work?

These are suction-mounting hooks. I want to visualize and understand how do they stick on walls.

After these hooks stick on wall. Like we compressed them. How? Since gases are compressible up to a good finite limit. What makes it difficult for them to come off if I pull them. It should be easily able come off also. Online , it says that the air gets enclosed inside . But I am not getting exactly what it means by that. How does that air enclosed creates a way in which it becomes difficult for us to pull the hook off.

TL;DR: Its not the air that's enclosed inside that creates the force, but the lack of air - or more precisely pressure.

First of all some nomenclature (this is for the closed type, there is also the open type):

When you press a suction cup on a surface what happens is that the air inside it is pushed out. During the compression phase of the cup the air comes out of the lip to the atmospheric pressure. So if you have an original volume $V_0$ of the suction cup, and then the volume reduces to $V_2 = \frac{V_0}{2}$ (usually there is even less volume), then the mass of the air trapped inside the suction cup is about half the original (keep this in mind for later on). 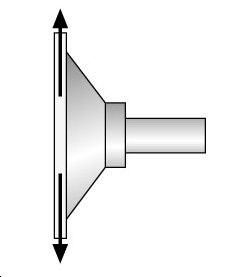 The dome is flexible, so while pushing it is easy to change its shape (thus force the the air out). Additionally the shape of the lip (at a tangent with the object makes it easy for the air to be driven out). However, after the external force is removed then because of the material elasticity, the suction cup is trying to return to the original shape. 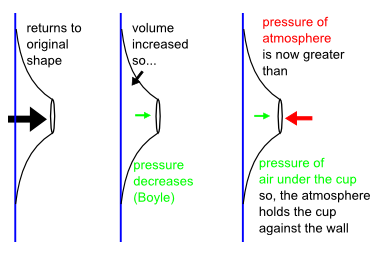 Then the "suction" force is equal to :

Assuming a diameter of 50 mm, and a pressure difference at about half the pressure of the atmospheric pressure, then you can estimate that the pull out force would be approximately:

Notice that if you double the diameter the force quadruples, so you can get significantly higher forces.

Why some surfaces are better

The reason why smooth non porous surfaces tend to behave better with suction cups is that there is not much leakage (from the outside in).

Air coming in the suction chamber would increase the pressure inside the chamber, and therefore reduce the pressure differential $\Delta P$.

When you push that onto a flat surface it pushes most of the air out.

The elasticity of the item makes want to flex and come off but the air pressure is pushing it onto the surface.

Not the answer you're looking for? Browse other questions tagged materials pressure applied-mechanics air or ask your own question.

4
Ensuring even flow in liquid pumping in distribution circuit under suction
1
How does the Italian Percolator work?
2
Glass panel engineering at work
3
Work hardening?
1
How does a Vibratory Pump ("Schwingankerpumpe") work?
1
How an airlock works?
1
How do vacuum sealers work on a glass jar?