At first I want to apologize while English is not my first language. I am a student, and I have to design such configuration: 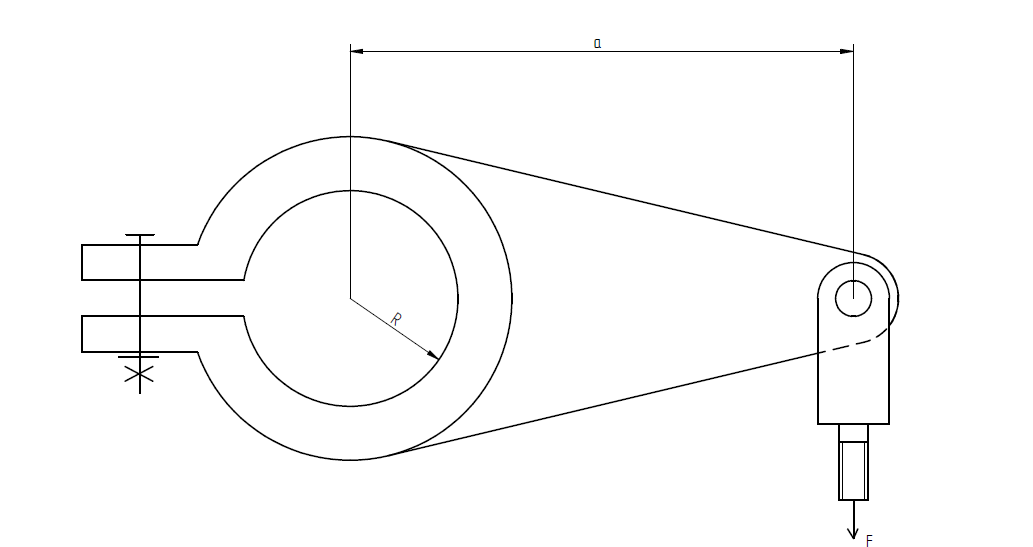 I already have designed the "fork" (the part on the right side). Now I am at the point of calculating for the clamp band which is one part with a steel rib ($a$ dimension).

My problem is that I do know that there is a torque caused by force F and the torque caused by friction forces between the clamp and the shaft neck (where $R$ dimension is), I have to find force values that causes that torques zero in the assembly and then I have to transform those Friction torque to find a suitable screw that will stand the coaxial force caused by clamping, but I am probably overthinking this problem because I am thinking like this:

When the structure is clamped there is a coaxial force in the screw that is causing radial forces to form and is causing the change of radius that is different in infinite points on the inner circle. Now the radial forces wont be the same in whole area that is holding the shaft neck because half of the band won't deflect, so apportionment of the forces (their value to be precise) will change with the deflection of the band - so the force is linked to Δr.

Because of the above the resultant of the radial forces on each of the quarters of the band wont be located on the inner circle with the tilt of 45° and -45°. So, because of that for now I have such variables:

Δr - change of the radius when the band is clamped - different in all areas where band is flexible.

$\alpha$, $\beta-$ degrees that are depicting in what points on the inner circle resultant Fr is hooked

So this picture, pretty accurately depicts what I have in mind: 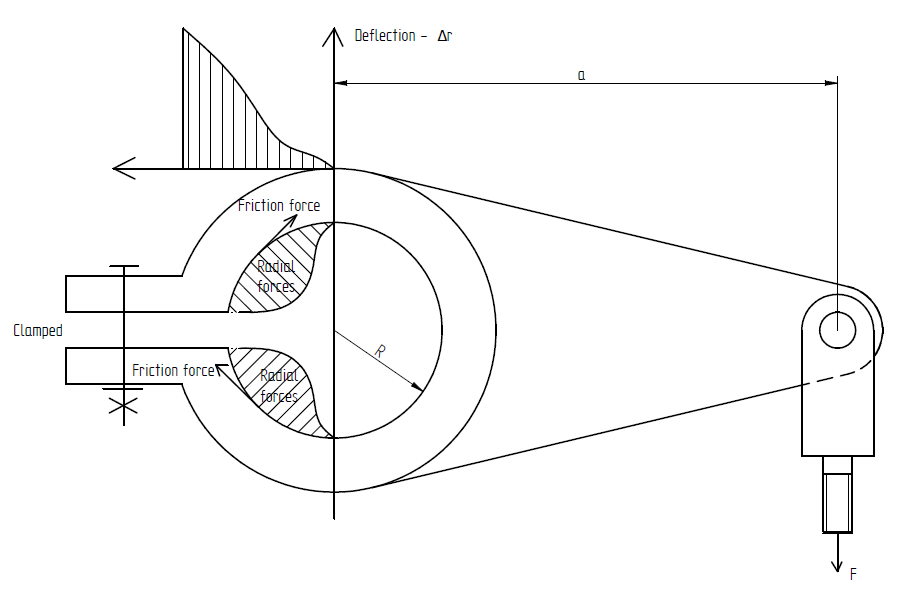 I know that this is complicated and probably impossible to calculate with my level of knowledge, so I am asking for help because I can't figure out what I can do here to actually calculate it.

I was trying to find some examples how to handle this but there is nothing helpful on the internet and it's unfortunate since it is quite easy for me to get "things" when I see examples.

Your diagram is not right. There are two major kinds of stresses, bending moment on the clamp, and tension due to the radial compression.

Their distribution is complex and indeterminate. it depends on the geometry of the clamp. the narrower it is the more principal stress is tension until ultimately it is functioning as a strap and all stress is tension, equal to the tension at the bolt.

Your best bet is an analysis by FEM.

The procedure below demonstrates a structural engineering approach: 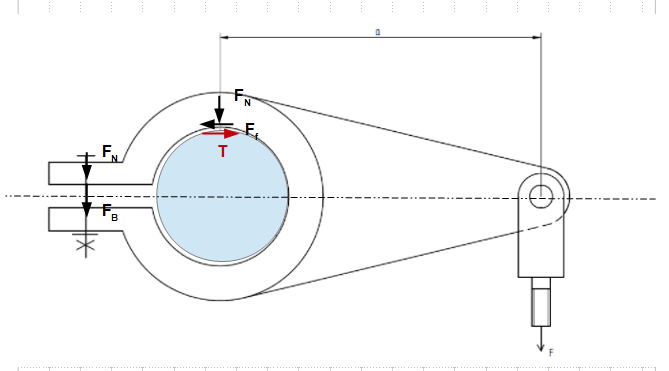 It depends on your tolerances. If they are tight enough so the gap is not too large, we can simplify and calculate the clamping force as follows.

Clamping force Fi (provided by the bolt connection) creates a radial contact pressure p. As the connection must be statically balanced, we can assume this pressure is indeed radial and equal around the clamped axle. The vertical component of the pressure must average to p (Pgem in the picture) or p = 2 Fi / ( d L ) which we assumed to be equal all around. So the frictional forces can be calculated with Ff = µ p A, where A = π d L.

Here is an online calculator from a dutch mechanical engineering professor: https://werktuigbouw.nl/sub23.htm 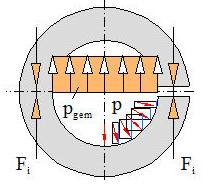 3
Can a hobby gearbox be used to mechanically amplify small forces for better force sensor resolution?
0
How to find required clamping force of bolts to prevent flange faces from twising due to torque?
2
Calculate maximum acceleration of a car from rest (optimum launch)
1
clamp force or torque for non-steel screws - brass or aluminum