I was watching a video that derives the forced vibration response of a beam. The link to the video is https://www.youtube.com/watch?v=6VuLZDgRhZ4&list=PLMXj6GKKnHI6Lftj7CXr9WusMkXi5s9yH&index=56 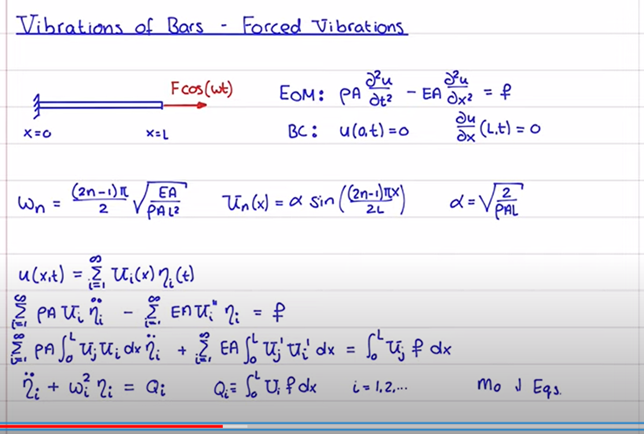 In the derivation, why is it correct to use the expressions for $w_n$ and $U_n$ (natural frequencies and mode shapes) that were derived based on free vibration of a beam?

These expressions were derived using the method of separation of variables by equating the first two terms in the equation of motion (EOM in the image above, with f equal to 0 for free vibration) and then equating them to a constant. The two separate equations, one that depends on time and another that depends on position, are set equal to 0 and boundary conditions are used to find the natural frequencies and mode shapes.

But why is valid to perform these steps when the right side of the EOM is not zero?

If I get your question correctly what you are asking essentially is, why are we using the formulas for the free vibration to predict the forced behaviour.

TL;DR: The general case of the forced excitation can be modelled as many cases of constant forces acting on a very small time interval

I will start from this because its the basis for what follows. Basically, if you have an impulsive excitation you have a force, that acts for a very small time. The impulse $I$ is then $I= F\cdot \Delta t$, where F is the force (assumed constant) and $\Delta t$ is the time duration that the force acts.

So, on first glance, you could say that the equation of motion is:

However that can be partitioned wrt to time to look like the following image. In that case the force can be thought as constant (if not, then you can take a much smaller interval)

Now the area on each of those intervals is $\int F\cdot dt$, therefore its impulse of the force $F_i$

So now, what you can do, is take a general excitation (any in fact), break it up into smaller pieces. Then for each piece calculate the impulse, and then the response x(t) as a free vibration with initial conditions. Finally you take all the responses and stitch them together.

The stitching part is not exactly what you'd call a walk in the park. It is actually called "Convolution integral/Duhamel integral", and unfortunately is beyond my capacity to explain in a way that its comprehensive in this forum, but if you are interested you can read about it.

Not the answer you're looking for? Browse other questions tagged vibration or ask your own question.