Structural steel standard S235, is it average yield strength or some fractile?

Question is in the title. There are many structural steels like S235 and S355, but are these values average values or 5 % fractiles for example (assuming some distribution of values found in tests), as usually assumed for characteristic values for resistance in standards like Eurocode? I could not find any information anywhere, these values are usually stated as "nominal" values, but what does this mean?

Although this is a very reasonable question and one would have expected to be prominently and explicitly stated in textbooks and in the industry, it is one that I've never actually seen (on the consumer end) answered.

The reasonable answer to your question would be that the "nominal strength of S235" would refer to a relatively small percentile (such as 5%). This would mean that approximately 95% of the material is expected to fail at higher yields.

However, although as a consumer I have received batches of steel which were called S235, and they had tests tensile results with the tests, from my (limited) experience with suppliers the test results were usually just a single number (no standard deviation or anything).

The following matrix is from a paper that they've done an analysis on the standard deviation for S235, S355 and S550.

Following are also a plot related to the above data. 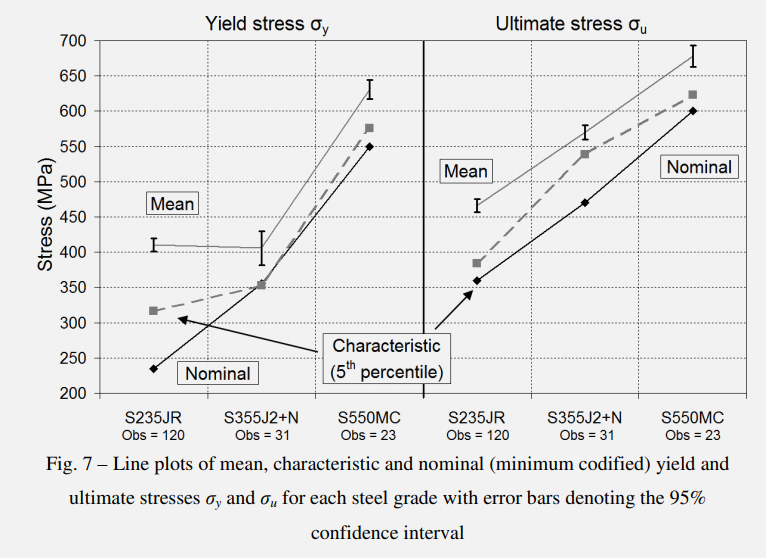 Although the above results are a single set, they are in accordance to what I've seen in the industry. I.e. the S235 is the cheapest material, followed closely by the S355, while the S550 comes at a premium. I suspect, in terms of cost it makes sense for steel producing companies (in order to avoid lawsuits costs) to slightly overengineer their 235 products (simpler and less tightly controlled processes). So, in a sense, they produce a material with a (cost effective) process which has a slightly higher mean value, and slightly higher variance. So they provide a product that keeps the majority of the customers happy and does not cost them too much.

As you move up the ladder of cost, there you get what you pay. A more predictable behavior, that comes at a higher cost.

Additionally, another issue is the skew value. If you notice all the values in the table have a positive skew (see below what a positive skew). Therefore the average, the mean and 5% percentile are closer together.

To sum up, I guess the main problem is the cost (in materials and time). In order to provide a percentile you'd need at least 4 to 5 tests to get a reasonable estimate of the standard deviation, which from there you could arrive at a percentile assuming a normal (or other type of) distribution. Given, that the properties of a batch can change, (and that the skewness of the distribution is usually positive), you don't really have to differentiate between mean and characteristic.

At the end of the day, if did full inspection for every batch, it would become costly (more in terms of preparing the specimen and conducting the test) without much point. Because (at least for the case of S235) you have designed the process to have an over-engineered cheaply produced product. Additionally, because the end classification is very coarse (S235, S355, S550), there is not much point in knowing that the 5% of the yield stress is 316.8. It would still be sold as S235.

If you are interested in the variation in yield strength among the same grade of steel, the paragraph below might have answered your question, or lead you in a correct direction for further research.

"Yield strength is a material property and therefore shouldn’t vary with thickness. However, due to processing methods, it often does vary by thickness."

For example, a hot-rolled structural steel plate like S235. According to BS EN 10025–2, the yield strength by thickness is:

Not the answer you're looking for? Browse other questions tagged steel or ask your own question.

6
What is the process for qualifying a weld between structural steel and stainless steel?
5
Is there a standard percentage to increase structural steel weight to account for bolts?
1
What thickness of steel sheet do I need to achieve a given strength?
8
Unbraced Length for Lateral Torsional Buckling vs. Yield Strength
7
How to calculate tensile strength of braided steel wire?
1
Steel Continuous Beam Structural Diagram
4
Steel : is Damascus steel still relevant compared to modern alloys?
0
Reasonable expected yield strength of A513 steel
3
Why is the yield strength of steel assumed to be less for a thicker element?
0
I can't decipher the string printed on my steel pipe (to find the yield stress)