Shear coefficient for an I-Beam

I’m trying to analyze the bending of an I beam using the Timoshenko beam equation and I can’t seem to find the value for the shear coefficient anywhere. Surely someone must’ve done the work (given how common I-beams are in structural engineering) and has a value or table of values. Or are there any algebraic (empirical) equations I can solve to get the values ? Thanks !

On top of flexural deflection, the Timoshenko Beam Theory includes a term called "Shear Deformation" that is to account for the additional deflection and shear stress due to shear effect, which is quite samall compared to the effect from the flexural, thus it is usually ignored except higher accuracy is desired. (See figure below)

However, shear deflection obtained by solving the equation using the unit load method is considered an approximation for two reasons:

The second defect can be remedied only by the more exact methods of the theory of elasticity, whereas the first can be eliminated by using the principle of virtual work, which is expressed as:

To simplify the expression, a cross-sectional property was introduced:

$f_s$ is called the "form factor" for shear. The form factor is a dimensionless quantity that can be evaluated for the particular shape of the beam. It is 6/5 for a rectangle cross-section, and 10/9 for a solid round beam.

Here is a table of the shear coefficient and shear factor for a few typical cross-sections. 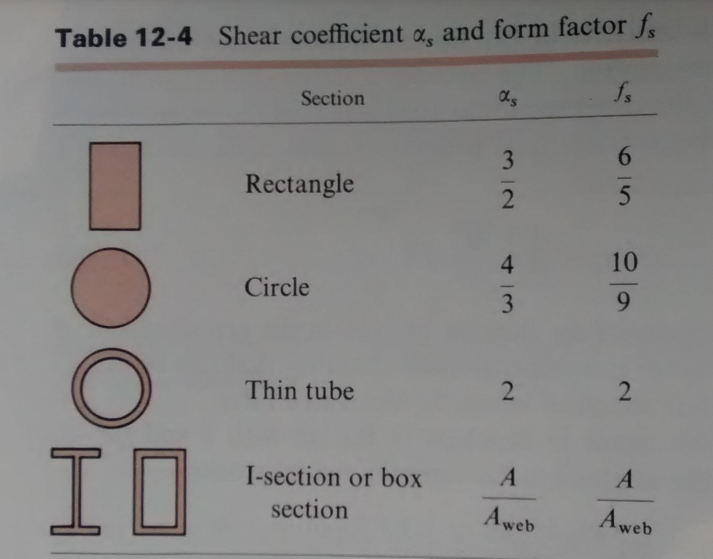 Usually $\kappa = \dfrac{\text{average shear strain on section}}{\text{shear strain at centroid}}$ but the problem with this definition is that it depends on external loading so you can't actually make a table for $\kappa$ values. However, we could make an assumption and define $\kappa$ purely in terms of the shape of the section: $\kappa_i = \frac{1}{\alpha_i}$. Then we can calculate from this expression:

I won't go into details of the terms such as $C_{ij}$ and $A_{ij}$. You could find details for it in this document Shear correction factors in Timoshenko’sbeam theory for arbitrarily shaped cross–sections. They also made a program for the calculation of $\alpha_i$. Read the document if you have any problem, hit me up.

For a I beam with parameters: 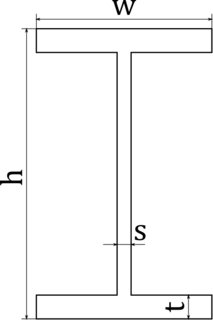 where $J_y$ the second moment of area to axis y and $A$ is the section area.

You can derive shear stress from Zhuravskii formula. From that, you can get local shear deformation across the transverse coordinate of the section: $$\gamma(z) = \frac{\tau(z)}{G}$$ Since the shear stress is zero at top and bottom surface, the points there should have the same axial deflection, which in case of just the shear loading should be zero. You can get the angle of deformation $$\varphi=\frac{T}{\kappa_y G A}$$ from this condition (it is similar to average shear strain but just across the transverse coordinate, not the weighted average): $$\int\limits_{-h/2}^{h/2}\varphi-\gamma(z) dz = 0$$ and transform it into the shear coefficient $\kappa_y$: $$\kappa_y=\frac{T}{\varphi G A}$$

You can see the deformation just from the transverse shear stress in the following figure: 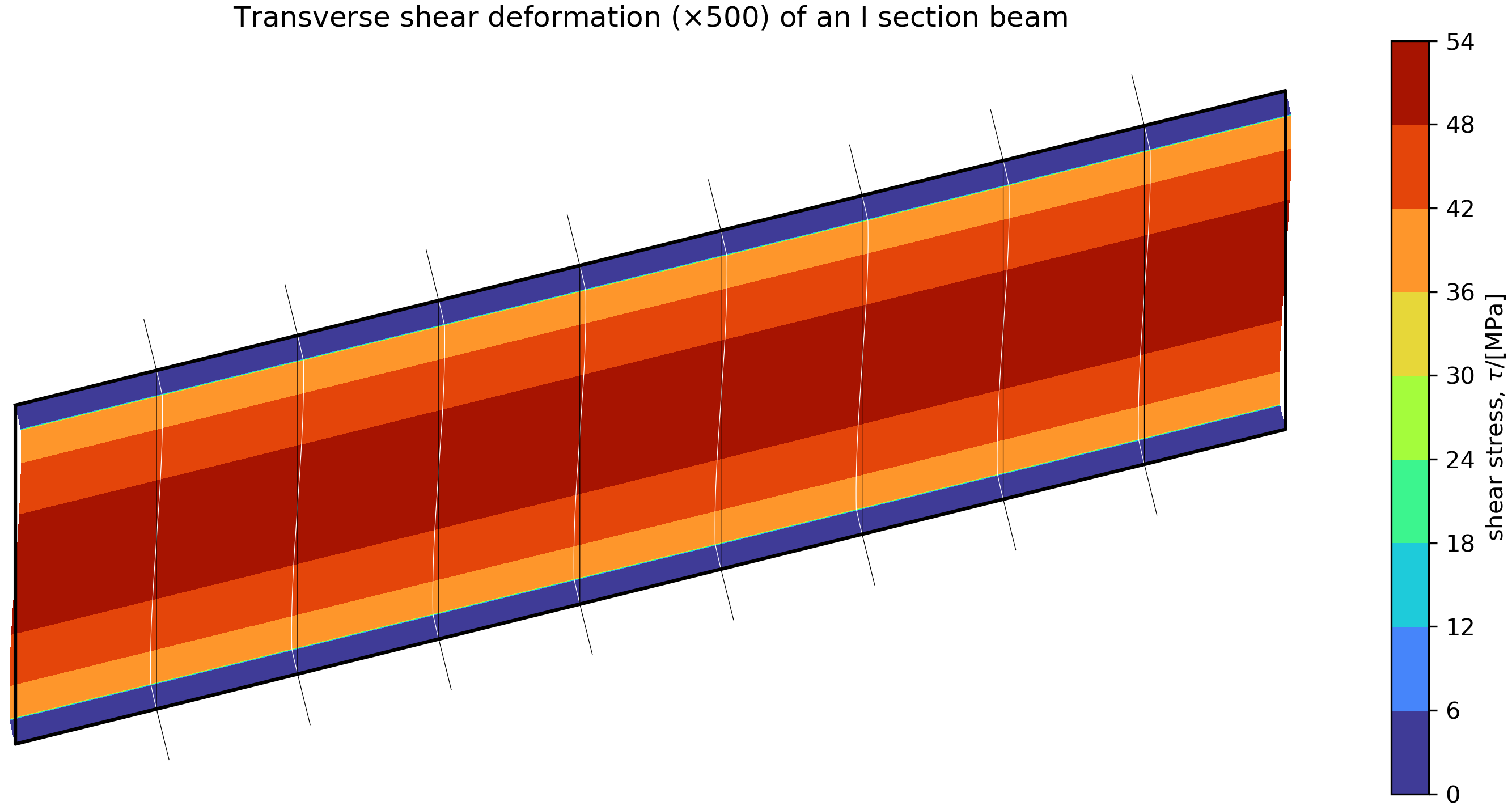 What is relation of this $\kappa_y$ coefficient with $A_w/A$? As you can see in the figure, the coefficients are similar for I sections with thin webs and flanges, but $\kappa$ is higher than $A_w/A$ for thicker webs and flanges. 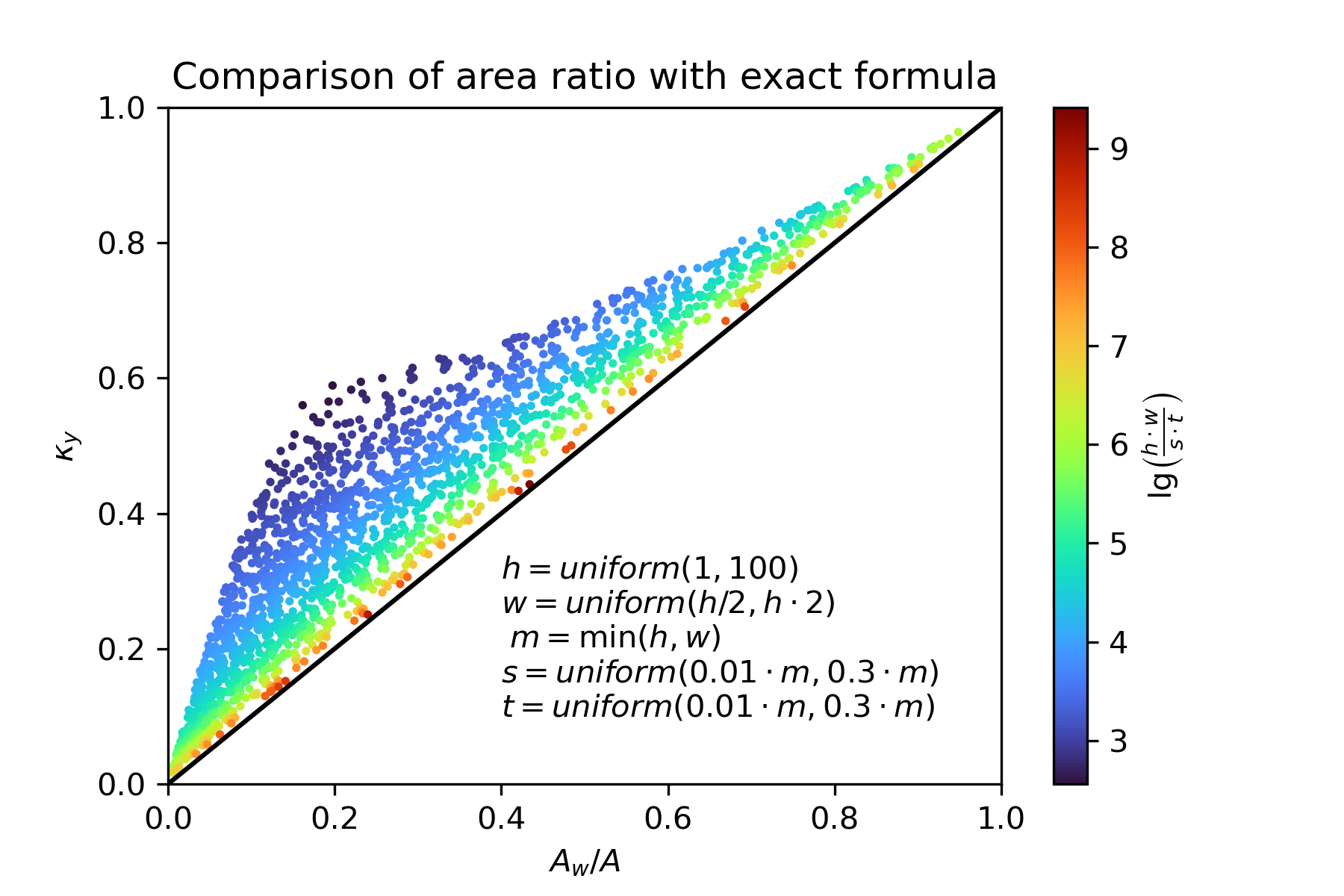 0
How can I understand shear flow in a beam cross section?