Why is the yield strength of steel assumed to be less for a thicker element?

The above image is part of table 3.1 of Eurocode steel design standard. Looking for example at the first row (steel grade S 235), we see that there are two values for yield strength $f_y$, one for element thickness $t < 40mm$ and another for thickness $t > 40mm$. But why is the yield strength less for the thicker element? I am aware that the yield strength depends on the manufacturing process of the element. For example, in hot rolled steel there are residual stresses due to uneven cooling of the steel element after hot rolling process. But I would assume that thicker elements require less rolling, and therefore less residual stresses. So why do we assume the value to be lower for these elements instead? Am I misunderstanding something? Thank you!

There are at least two contributing factors to that:

Usually thinner steels exhibit higher yield points (see cold roll sheet catalog page.8) and ultimate tensile strengths (see Steel construction) because, sheets of steel, that come out of rolling processes (especially cold rolling processes), have their grains refined. In most cases what happens is that the grains of the material become more elongated. 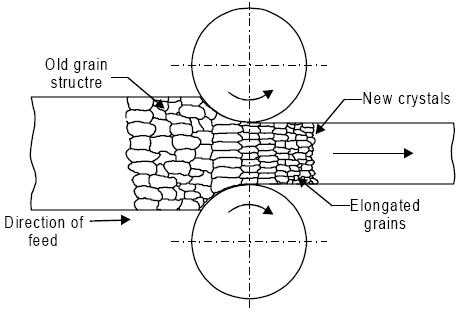 b) Additionally there is another probabilistic reason.

The strength of steel is determined to a large degree from the defects in the atom structure. For greater volume there is greater chance to encounter more defects in absolute numbers, and among those larger defects in magnitude. As a result a thicker material has more probability to contain defects that will lower its strength.

An analogy is the following: if you have a rope which you expect to fail at 100 N and you expect a variability of that strength, then it is safe to assume that upon testing you would expect that a 10 cm rope would endure slightly higher load that a 10[m] rope (because the longer rope would have a greater chance of containing a weaker segment).

For hot rolled , the thicker section cools slower so has coarser pearlite and coarser grain size because the grains have more time to grow larger during the slow cool. A secondary factor is the thicker section is worked less / less strain to refine grains. The lower strength affect of the slower cooling thick sections also occurs during normalize and quench and temper heat-treatments.

Not the answer you're looking for? Browse other questions tagged structural-engineering stresses steel or ask your own question.

0
Does a change in specimen dimension affect the measured yield strength and tensile strength?

9
Would a PE-pipe filled with concrete make a good pillar?
6
Tube Steel - ASTM A1085 vs. A500
8
Unbraced Length for Lateral Torsional Buckling vs. Yield Strength
1
Why is the normal stress assumed to be 0 in plane stress?
3
Percentage area of steel for a retaining wall - standard formula doesn't make sense to me?
0
Reasonable expected yield strength of A513 steel
0
Structural steel standard S235, is it average yield strength or some fractile?
0
I can't decipher the string printed on my steel pipe (to find the yield stress)