I am designing an animatronic head, which has five degrees of freedom: pitch, roll and yaw for the head part, and pitch and yaw for the neck part. However, the yaw movements for the head and neck are defined to be identical – if the neck rotates 7°, then the head also rotates 7° – so there are actually just four parameters determining the position of the system: 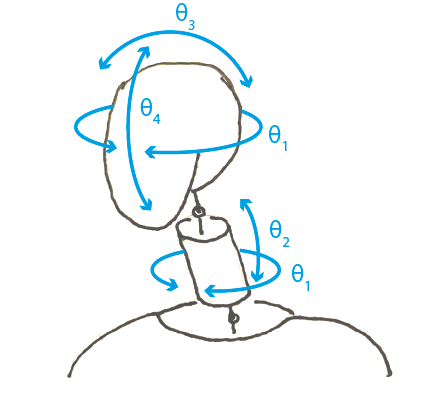 If I do this the "obvious" way, with gimbal arrangements at the two centers of rotation, that poses some practical problems for me in how to construct and drive the thing. It occurs to me that it might be possible to instead build a linkage out of rods connected by ball joints (or similar), such that I can get the same motion by driving the ends of four of the rods along (preferably) linear tracks: 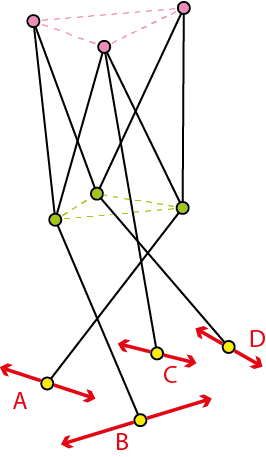 Intuitively, it seems like, with rods of the right length connected in the right topology, it should be possible to make every vector $<A,B,C,D>$ correspond to exactly one value of $<\theta_1,\theta_2,\theta_3,\theta_4>$ over a finite range. As long as there are no problems with singularities or things like that, it would "just" be a question of translating the rotation angles into ABCD values to get any desired motion.

Given the design of the linkage, the problem of converting between the input parameters and the Euler angles is well documented, and I can use a constraint-based solver like SolveSpace to resolve the dimensions. What I don't know is how to design the linkage in the first place.

My problem is that as a non-engineer, I don't know the terms to frame my question. For instance:

The easiest way to do this (either the direct or the inverse) is with the use of the homogeneous transformations.

Basically, it is an augmented transformation matrix in 3 dimensions which can also accommodate translation (and scaling - this won;t be of much use to you). The main form is:

They are widely used in computer graphics, but they are very helpful in robotic kinematics.

The good thing is that you can chain together this transformations, and you get the result with a easy to program method.

There is a nice example I found by doing a quick search on the subject on this link.

Not the answer you're looking for? Browse other questions tagged terminology machine-design linkage or ask your own question.

7
Design of a Four-Bar Infinity Coupler Linkage
0
What are a few low-cost options for building linkages?
4
what college level teaches mechanical linkage design?
2
How do Test Indicator Flexible Holders hold rigidly when tightened?
2
What is this bistate linkage?