How do I interpret the following Bode, Nyquist and Nichols diagrams?

I am working with an arbitrarily complicated and long-winded transfer function that looks something like this:

$$ H(s) = \frac{as^4+\cdots+b}{cs^6+\cdots+ds^2} $$ where letters represent constants. First I have the bod plot which has a consistently decreasing magnitude which indicates that t acts similar to an integrator for magnitude, but I am unsure about what the almost constant -180 degree phase margin indicates and why there could be this trough and peak around 10 rad/s. 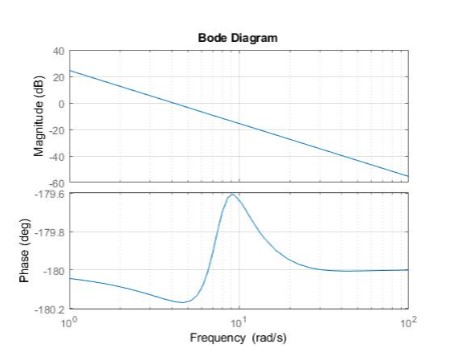 This Nyquist diagram is below as well. I think this is showing that the system is stable as expected as no open-loop poles appear on the right-hand real axis. 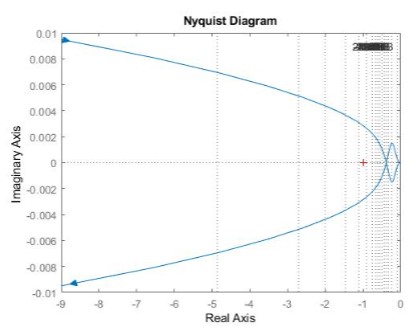 I zoomed in on the origin and this is what I was able to see. It seems like it does not ever cross into the positive real axis.

Nichols diagrams are something I have not worked with before and so am trying to understand their significance. This certainly mirrors the bode plot where a -180 degree phase dominates but is this saying that the phase is about -180 degrees for pretty much all open-loop gain values? 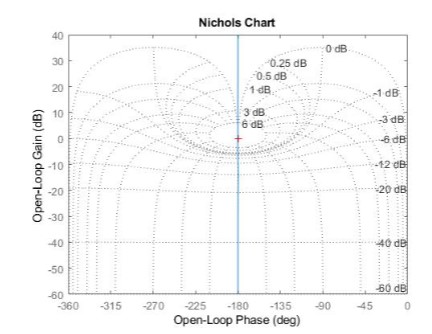 Your systems shows extremely close pole-zero cancellation. So much even that it nearly removes 4 poles and zeros. Lets look at why, starting with the Bode plot:

The magnitude plot is constantly decreasing with a slope of -40dB/decade. Following basic rules this already implies that at the given frequencies, the system can be approximated using a double integrator. The rule of thumb for this is: -20dB/decade for each pure integrator. The phase plot backs this statement with a nearly constant -180 degrees phase angle. Same to the magnitude plot, the rule of thumb is -90 degrees for each pure integrator. (pure integrator means $\alpha\frac{1}{s}$). However, the interesting part here is the little bump in this phase plot. This behaviour can be explained using the following example:

Let imagine drawing a bode plot for this. At low frequencies, this can be approximated as $$\frac{\alpha}{\beta s}$$ so a pure integrator. For very high frequencies this approximates to:

So as you see, the low frequency approximations behaves equal to the high frequency approximation. What happens in between depend on which value is smaller. is $\alpha < \beta$ then the magnitude plot approaches a horizontal slope (and a 0-degree phase angle) for values larger than $\alpha$, but again a -1 slope for values larger than $\beta$. However, if $\alpha$ and $\beta$ are very close, this effect is practically not visible in the magnitude plot. The phase plot does show a bump as the effect in phase changes much faster. As such, to return to your case, the bode plot shows almost the perfect behaviour of a double integrator system. Given your system representation, it is safe to assume 4 poles are closely cancelled by 4 zeros.

Your graph does not show any encirclements. However, due to the presence of 2 pure integrators, the graph shown is not complete. This should include a full rotation in the clockwise direction with an infinite radius. As such, the contour does actually encircle the -1 point more than once in the clockwise direction. This means that the closed-loop system has unstable poles, but if the open loop system has them as well is sadly not known (many sources state that you should know this).

And as for your third plot, I havent seen that one either so cannot give a proper interpretation. But despite that, I hope some of this is usefull!

It all boils down to the numbers.

The constants in your TF basically seem to describe an integrator with some "disturbance" somewhere in the frequency.

The easy way for the whole clear picture is factorise both numerator and denominator to see where poles and zeros are.

Your graphs being able to show them depends on the scale limits you set and on the logarithmic or linear representation.

Once you know where to look is easier to see something.

Not the answer you're looking for? Browse other questions tagged control-engineering control-theory pid-control transfer-function or ask your own question.

2
Question on sketching nyquist plot of transfer function with poles on imaginary axis
1
Why can’t one see for 2nd order system that it is at its stability limit neither in the Nyquist plot nor Bode plot?
4
How do I compute/plot the open loop transfer function of a system given its state-space description?
0
Gain and phase margin
0
Bode plot phase margin concept details