How do I calculate final equilibrium temperature of a pot of water on a stovetop vs. after I add food to it?

So I'm trying to come up with a simple hack to heat up food in a water bath to hopefully +-1ºC of a target temperature, but I really don't understand the physics of it all so much. I'm pretty sure I can keep a hot plate at a somewhat steady temperature by cycling it on an off at regular intervals, but I'm not sure what that means for the food itself.

Here's what I'm thinking: If I can get the hot plate to stay steady at a temperature of my choice, when will place a pot of water on it and the water will stop heating up after it hits some lower temperature point, say at 75ºC. That means it has reached thermal equilibrium and is heating up at the same rate as it loses heat to the environment - and as long as the heat output of the plate is the same and the environment is stable, the water shouldn't drastically change temperature.

What I want to know is: will the final equilibrium temperature will be significantly different after putting some food in it?

I did some googling and managed to come with the following, probably wildly incorrect reasoning:

Most foods' specific heat is around 3 kJ/KgºC, and waters' is around 4 kJ/KgºC. I suppose that means given the same heat input, food will heat up about 1.33x more than water?

What exactly does heating up 1.08x more mean, though? Do I just multiply 75ºC by 1.08? Surely not, right? Do I need to stick 1.08 in some formula or convert it to kelvin or something? What even are numbers, really? Thanks!

Just to clarify, what I'm concerned here is the final temperature once the pot reaches equilibrium again, not how much the temperature will drop when the food is added.

At equilibrium, the heat entering the pot and the heat leaving the pot (heat flux levels) will be equal, otherwise the pot will either heat up or cool down.

What matters here isn't the heat capacity of the contents, it's the heat flux leaving the pot. I'm assuming that the heat from the hot plate will be constant in both scenarios. It's not clear to me exactly how the exiting heat flux changes with added materials (meaning what the equations are), but intuitively if the water level in the pot goes up, you should have more heat leaving it. Eventually, your burner wouldn't register hardly any temperature rise in the pot at all if the heated water had a very large surface area to transfer heat from. At the smaller water levels here, this would be the same really as just adding 7% more water to the pot (again we really need density of the items, water absorption, etc, but I'm discussing generalities). I would expect the heat loss change to be based proportional to the change of the height of the water column, so it would change less than the mass added to it. Change in height = volume added / (pi*r^2). So the change in temperature (in degrees K) would be proportional to the inverse of the square of the added volume.

I will assume for this that we are adding a significantly smaller amount of food than the amount of water, so that the heat transfer through the materials inside are immaterial. If you added 2 kg of carrots to a liter of water, the heat transfer through the materials will be less due to the loss of convective currents in the water. Add .2 kg and I doubt you would see the difference.

TL;DR: The temperature in pot of water when food is placed in it is not only a matter of heat capacity. Other parameters like heat conductivity and convection have a significant effect on the transient temperature response.

I will try to answer by taking a different simpler example, before tackling your example. Before I do that, I will point out that water has probably the highest heat capacity out of common substances (at around 4 [kJ/kgK]). The reason that meat has approximately 3 [kJ/kgK] is because meat is about 70-75% water.

A short explanation of heat capacity

Heat capacity $c_p$ is the amount of heat energy in J you have to give to a kg of substance in order for it to raise 1 degree K. So in order to raise about 10 degrees Kelvin 1 kg of water you'd have to give it about 40 kJ. Equivalently, if you add 40 kJ of energy to 10 kg of water the temperature will increase only by 1 degree.

(Another quantity you might want to learn about is enthalpy, but for simplicity's sake we'll not be discussing about it).

However, all the above are due to the fact that the quantities discussed above are liquids, and their instant mixture allows quick exchange of heat. Things are different for solids. The reason is that they are at a different phase.

Assume now that you have a ice cube of 1 kg, which is at -10 degrees, and 1kg water that is at approximately 20 degrees.

The heat energy in the system is equal to 2kg of water at 5$^oC$. However if you place the icecube in the water it will take some time until ice changes to water (if you could somehow put this into a thermally insulated container (with minimal heat capacity), the resulting temperature after a while will be 5$^oC$. However, for a long time you will have an icecube of -10$^oC$ with an outer layer which is close to zero.

Now, if your take an icepick and break up the ice cube and then place it into a blender, and then join them together, then almost instantaneously the result will be 2 kg of water at 5$^oC$.

So the idea that creeps up now is heat conductivity. This is the rate by which heat flows through a material. (Actually, its also convection, but this post is starting to look like a few weeks worth of lecture notes for a physics class, so I won't delve into that).

The following image shows the different mechanisms of heat transfer. That might serve for the following (short) discussion of your example. 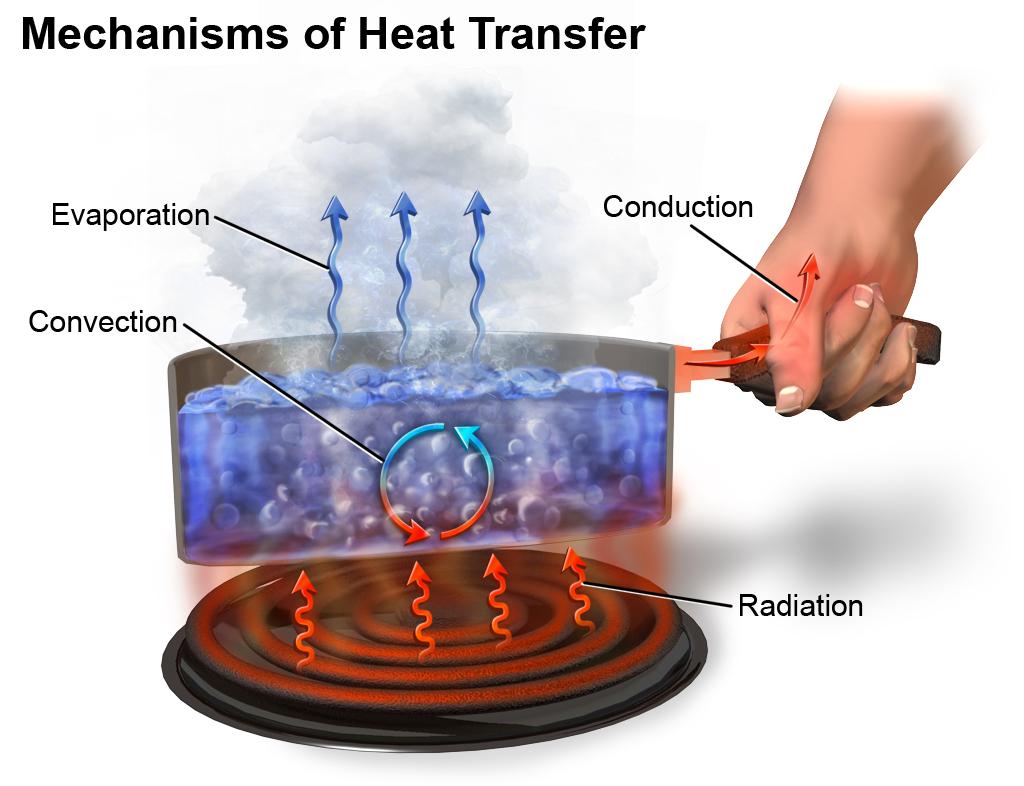 Putting a piece of meat into water is subject to all the above (and more). When you put a piece of meat at 5$^oC$, into water of 45$^oC$, the heat isn't immediately exchanged. It takes some time for the heat to propagate into the meat. this is why you get the different zones in the cooked meat below (although this is not boiled). 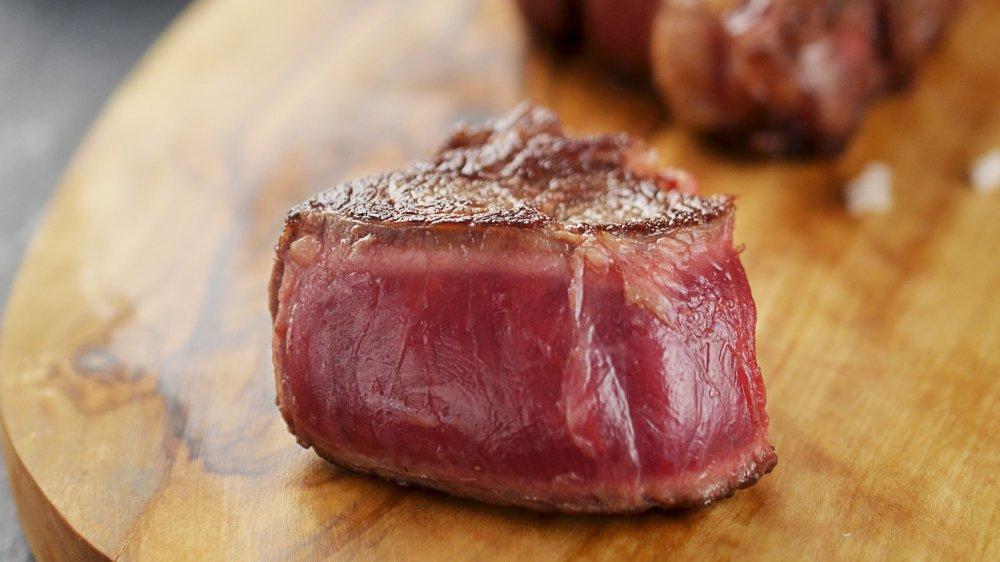 Bottom line: The way heat transfers in a pot of water when food is added, is affected by many parameters (conductivity, convection and heat capacity). Maintaining a constant temperature in the water between $\pm 1^oC $ will be a challenge.

1
How to calculate time taken for an electric shower to reach set temperature
1
Heat Transfer in Different Wire Configurations
0
Wire heating and heat transfer in a cylindrical pattern
0
How does the change in temperature of water in a tube depend on the angle that the tube makes with the gravitational field/the horizontal?
1
Calculating final temperature of humid air and cool stone
2
What and why thermal diffusivity?
5
Why does the author assume the temperature to remain constant, in this case, along the axial direction?