Is cast iron better that Copper or Aluminum for cooking steaks?

Folk wisdom states that Cast Iron pan is the best for searing steak because of its high heat retention relative to the aluminum/copper counterpart.

However, this doesn't make sense in practice... because it assumes no continuous source of heat. In reality, where we continuously supply heat to the pan (and assuming perfect heat diffusion within the pan), cast iron should offer no advantages.

Especially since there's no way the heat output from the system is greater than the heat input.

"Advantage" in this context means the ability to transfer heat to the food at an even and steady rate. (the common fear is that plopping a cold steak in the pan will instantly cool down the pan and make it unable to keep cooking, or change the rate at which to food cooks)

UPDATED TL;DR: Cast iron has the advantage, because it has a greater capacity to hold heat, and because of its lower conductivity it releases it more slowly, thus its temperature does not fluctuate as much (thus having a more even and steady heat flow)

UPDATE: Answering in terms of the advantage (scroll way down) for the following sections

After the some of the comments I feel the following need to be addressed:

Apologies for being so long a post, but I really enjoyed this (even though some seem to disagree).

Lets start with the properties, they'll come in handy later

This is drawn mainly the comment from Tigerguy (leading people to heat up cast iron in ovens). It may me realise that some people cook their stakes in the oven instead of the stovetop (I wouldn't do it). Ι would also avoid even more using a skillet in the oven.

Obviously if you are talking about in the oven, the temperature distribution is uniform, and to be honest there is not much point to use a pan or a skillet. So from now on I will focus on the type A (on the stove top).

Time to heat up: This goes without saying... I'll never put a steak on a skillet that its not hot. So all my calculations, assume that the skillet is left for a few minutes on the stovetop to heat up and reach a steady state temperature.

The assumption of constant heat flux $q$: This is a tricky one, since most modern ceramic stove tops have some sort of thermal thermostat and switch automatically on/off (correct me if I'm wrong, I've never dissected one). That means that you have a "steady" temperature, and an "average" steady heat flux. On the other hand, gas cookers have constant heat flux, and they can literally burn a cooking utensil if left unattended for too long. Eventually constant heat flux means constant temperature at steady state, but in the case of gas that means burned materials. In any case, I think for the task at hand it's ok to assume constant heat flux $q$.

The following image shows a skillet, and we'll be discussing the temperature distribution. 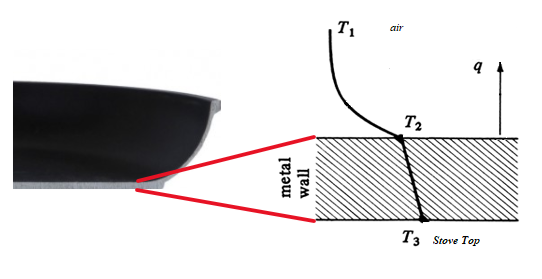 In the image the temperature are the following:

Assuming a constant heat flux, then between zones :

Now assuming a constant heat flux, and a constant cross-section we can simplify the equation as

Now since $q/A$ is constant we can calculate

So both temperatures can be estimated but only $T_3$ is depended on thickness of the material, the heat conductivity and the area, while the top surface is determined only by the air conductivity coefficient (my bad).

Then you can see that for constant $q$, and thickness $t$ you'd have a greater temperature difference between the cool and the hot side of the skillet.

For this numerical example I will assume:

why greater thermal capacity is better

This means than when the steak and the skillet come into contact:

why lower thermal conductivity is better

Although lower thermal conductivity is not as detrimental, (and in terms of heating time and response is worse), it allows for slightly greater temperatures on the hot side (for a constant flux). (If constant $T_3$ is assumed then you will have greater $T_2$). The added temperature has a (small) beneficial effect on the heat capacity (because the average temperature is greater).

Especially since there's no way the heat output from the system is greater than the heat input.

You need to think the heat capacity of the skillet as a battery/heat energy buffer. Although you are right that there is continuous heat input, the moment you put a room temperature steak, there is a very sudden temperature difference (due to the higher conductivity and heat capacity of of the steak). That creates momentarily an increase in the heat flux, which is away from the previous steady state.

The more thermal inertia (i.e. heat capacity of the skillet the better). As we've seen an similarly shaped and dimensioned cast iron has much greater thermal capacity and therefore, the temperature drop will be smaller.

"Advantage" in this context means the ability to transfer heat to the food at an even and steady rate. (the common fear is that plopping a cold steak in the pan will instantly cool down the pan and make it unable to keep cooking, or change the rate at which to food cooks)

If by "advantage you mean even and steady rate, then the cast iron since (again) it has higher thermal capacity and lower thermal conductivity, it will transfer heat energy at a slower rate, and for a longer time. This gives time to the system to reach equilibrium, beyond which the heat flux is steady.

I enjoyed writing this a LOT. It was a thought exercise that I meant to do, but never actually had the chance. Going through it (and with the driving help of some comments), I managed to clear up some my thoughts better and set the things straight (i.e. conductivity doesn't contribute that much). If you feel, I am wrong somewhere or if you need some further clarification, don't hesitate to put a comment below.

Also sincere apologies to my fellow husband, for not agreeing with him and having an opposite opinion. (You don't have to show this to your wife). Us -married men- should stick together :-), but when science (or cooking) is involved... cast iron wins.

Not the answer you're looking for? Browse other questions tagged materials thermodynamics or ask your own question.

2
What's the most cost-effective cutter bit material that can be used to machine aluminum oxide?
1
Selection of copper alloy for electrical and wear applications
2
Which materials can be used to make permanent casting molds for cast iron?
0
Does tunnel lining made of cast iron tubings actually accept all the mechanical loads?
0
Is it possible to cast copper around another metal
1
Use of Cast Acrylic sheets as glazing in a Flat Plate Collector for domestic water heating
0
Aluminum or Copper, which one is better to control and maintain the temperature?