Its very basic question. But there is no data all over internet about it.

Let's see how we calculate mass flow rate through pipe.

We take velocity of fluid and c/s area of pipe. Then we find volume flow rate using continuity equation. After that we multiply it by density So far so good.

Now if we see the density of water and water vapour at saturation point (100 celcius), there is a lot much difference.

Both will give different answers.

This question is still haunting me even after my engineering is completed. Over the years, I have seen numericals using them both without any reasonable explaination. Help me understand this please! Let's say dryness fraction is 0.6

If you interested in the mass rate of a partially full pipe at steady state , then things are very simple. 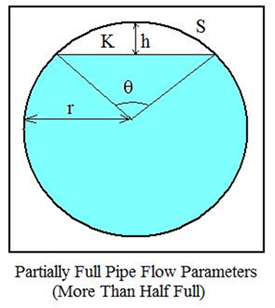 The total mass would be the sum of the mass rate

Just for comparison purposes, lets assume that the pipe is half full. In that case $A_{liquid} = A_{vapour}=\frac{\pi}{2} r^2 $. (Also, in most cases the velocity of the vapour and the liquid should not be all that different but lets not make that assumption here).

In that case you see that the mass rate is predominantly from the liquid. i.e.

So you see even if you calculated only the mass rate of the liquid, you would only incur less than 0.1% error in the mass rate.

Of course if the flow is not steady state, and you've got gas bubbles and pockets (see below), that is different ball game. 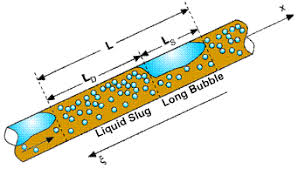 Not the answer you're looking for? Browse other questions tagged pipelines steam flow-control or ask your own question.

0
How to calculate saturated steam flow rates?
1
Estimating Potential Flow through a pipe, from tanks to outlet
1
Flow rate into a reactor from feed
4
Buoyancy force problem
1
Modeling Water Flow Through Saturated Medium
1
Volumetric flow in a pipe from velocity
1
Do you adjust gas flow rate (SCCM) to volume of chamber?
1
Do pressure regulators restrict the mass flow rate?
1
Cheapest way to measure gas flow (mass)?