What is the physical meaning behind the concept of shear lag in fibre reinforced composite structures or the concept in general for any structure?

Here is how I visualize what is physically happening (for steel sections): 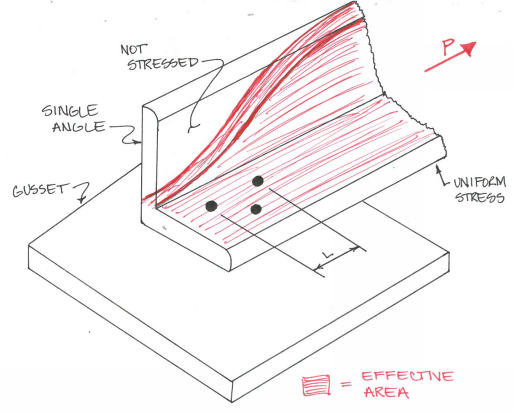 I can't speak to fiber-reinforced composites, but the general concept of shear lag is summed up in the AISC 360-10 Specification, Commentary Section D3 as such:

Shear lag is a concept used to account for uneven stress distribution in connected members where some but not all of their elements (flange, web, leg, etc.) are connected. The reduction coefficient, $U$, is applied to the net area, $A_n$, of bolted members and to the gross area, $A_g$, of welded members. As the length of the connection, $l$, is increased, the shear lag effect diminishes. This concept is expressed empirically by the equation for $U$. Using this expression to compute the effective area, the estimated strength of some 1,000 bolted and riveted connection test specimens, with few exceptions, correlated with observed test results within a scatterband of ±10% (Munse and Chesson, 1963). Newer research provides further justification for the current provisions (Easterling and Gonzales, 1993).

Basically, shear lag is a concept where the forces in a connection require a certain length to properly "get out." This is partially dependent on the relative stiffness of the connection vs. the direction of the application of the load.

For example, consider the figure below from the AISC 360-10.

The example on the left is more impacted by the effects of shear lag since the force in the connection has to transfer along the length $l$ of the weld. The $U$ value would likely be less than 1.0, indicating the influence of shear lag.

Table D3.1 of the AISC 360-10 tabulates the calculation of different $U$ values based on the connection geometry. I have pasted a snippet of it below for a couple examples. Your code of record may vary depending on your country and jurisdiction. 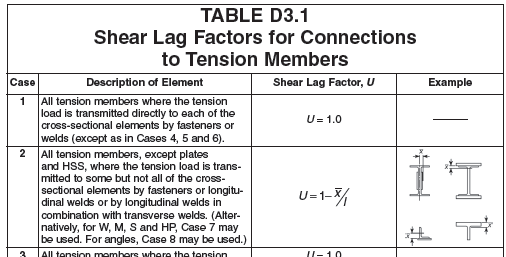 3
Does notching the corner of an angle brace member help or hurt when shear lag is present?

10
How is the design life of a reinforced concrete structure calculated?
5
Logic behind location of shear centre
5
What is the mathematical derivation for shear center of a beam?
6
Does the ultimate tensile strength of a material have a physical meaning?
2
What is the difference between Ordinary reinforced concrete shear walls and special reinforced concrete shear walls?
3
Shear strength polymers
8
What is the physical meaning of pulse rate and blood pressure, from a turbo machinery point of view?
3
Does notching the corner of an angle brace member help or hurt when shear lag is present?
1
Honeycomb structures vs shear stress
2
What Are The Recommended Binding Methods For A Carbon Fibre Chassis Frame?