How do I properly compute mean time to failure?

I have a product of which we have shipped something like 500 units over the last five years. This product is not intended to be user serviceable; a failure of any component results in the unit being replaced. The majority of these units have never seen problems and are still working fine. Some have been damaged and come back for repairs.

How would I go about computing mean time to failure (MTTF)? Would I include only the units that have failed? Or would I also figure in all units that are currently operating? What about the fact that I only have the date of sale, not the date of installation? And that I don't know what fraction of the installed time the unit is running? Should I just make reasonable assumptions?

First off, always remember that garbage in = garbage out; so if your data is garbage then your statistics will be garbage.

In this situation your optimal data would be something like Run Hours Until Failure and your entire dataset would have failed already. With this in mind you may want to choose a conservative number from whatever statistic you calculate.

Since you only have failure from sale date this may be skewed toward a higher MTTF.

Since not all of your product has failed yet you can look at a smaller subset of your population, say the 1st six months of production. A higher percentage of these have failed most likely (since the product you sold last week shouldn't fail this week, hopefully).

If your failure proportion is still too low then you may have to try to fit the data to a distrubution keeping in mind that you only have the low proportion of the distribution, i.e. you must extrapolate from the dataset to a fitted curve. 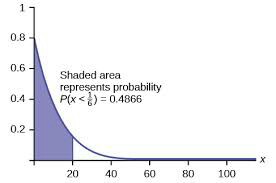 This can be rather intensive, however, for anything besides an exponential distribution.

Another method of extrapolation is by Degradation Analysis

If you don't have hard data, making assumptions (preferably "reasonable" ones) is the only option you have. (Maybe that's why engineers used to call their slide rules "guessing sticks...")

You can't ignore the fact that most of the units have not failed so far. A plausible approach to this would be to use the times-to-failure that you know, to fit the parameters of statistical model of the failure process. You also need to check that the predictions of the model are consistent with the raw data, before you use it to forecast anything.

A commonly used model in reliability engineering is the Weibull distribution, which can represent quite a wide range of different "root causes" of failure, and will automatically adjust to use the "best" shape of probability curve (within limits, of course) to match your real-world data.

Google will find plenty of hits for "Weibull distribution tutorial" etc, but if you are new to this it would be a good idea to get an overview of "reliability engineering" before you pitch into the details. A good place to start would be a professional engineering organization, for example the American Society for Quality (ASQ).

The most practical way to make the estimate would be to use some computer software rather than figuring out how to do the math by hand, but without more specifics of the problem, it's hard to recommend any particular package.

The statistical tool Weibull as suggested by the previous two responded is the tool of choice for Mean Time To Failure (MTTF) calculations. Based on your comment as capture below, it appears that Weibull Analysis didn’t generate expected results.

Most statisticians that I have worked with recommend a sample size of 30 for most statistical analysis. My suspicion is that the limited data size might not be helping the analysis. I suggest starting with a simple average and standard deviation calculation for time to failure based on the available data. You might have to make few reasonable assumptions when calculating time to failure base on your product. For example

With current technology and available data you might be able to refine your assumptions too.

The point that I am making is good reasonable assumptions will help generate a good data set. Also in my experience basic average and standard deviation calculation will help gain good insight into the problem at hand.

Hope this response finds a reasonable solution to the problem at hand.

Not the answer you're looking for? Browse other questions tagged statistics mathematics failure-analysis or ask your own question.

0
How to use failure criteria in isotropic material (NASTRAN)
3
What type of failure is this?
2
Failure due to shear stress on rod lip?
4
How to apply static failure criteria for bending stress in an angled cylindrical surface?
1
What does (a) the input of the activation function mean?
0
How to determine the maximum internal stress for a material under compression before brittle failure?
2
How to calculate the failure rate of a machine with probability and mean failure time?