How to keep a tray horizontal when moving around a closed, vertical track?

I have seen this somewhere in the wild, perhaps a space-efficient storage system in lieu of two shelving units. I'm trying to reproduce, and failing.

Imagine two stacks of trays which hold things that must not fall out, so the trays must remain horizontal. The trays are all connected to the same track, which loops around, so that the first stack is on "the way down" for the track, and the second stack on "the way up".

Q: how are the trays connected to the track, so that they can move along the track eternally without ever tipping over?

I sort of remember that there is a wheel on each tray that counteracts the rotation coming from the track, but I don't remember how.

Image in my mind: The track is on a wall, with the trays being perpendicular from the wall. The track is rectangular (with rounded corners obviously).

Solution 1:
If the things that the trays are holding are relatively light (to the tray/shelf), or if its feasible to perfectly balance the load on each tray, then you could just use gravity. You could attach the tray to the track carriage (for lack of a better word) via a bearing, and then just ensure that the CoG of the tray+contents is well below the pivot point (where the bearing is).

Solution 2:
Have an additional track/slot that controls the angular position of the tray (by it's position, so it would not just 'follow' the other tracks). It would probably need to be a slot, and the 'track' would probably need to be redesigned as a slotted/indented track as well that was of greater depth than your angular-controlling slot so that the angular-control-slot could pass over the normal slots/track. 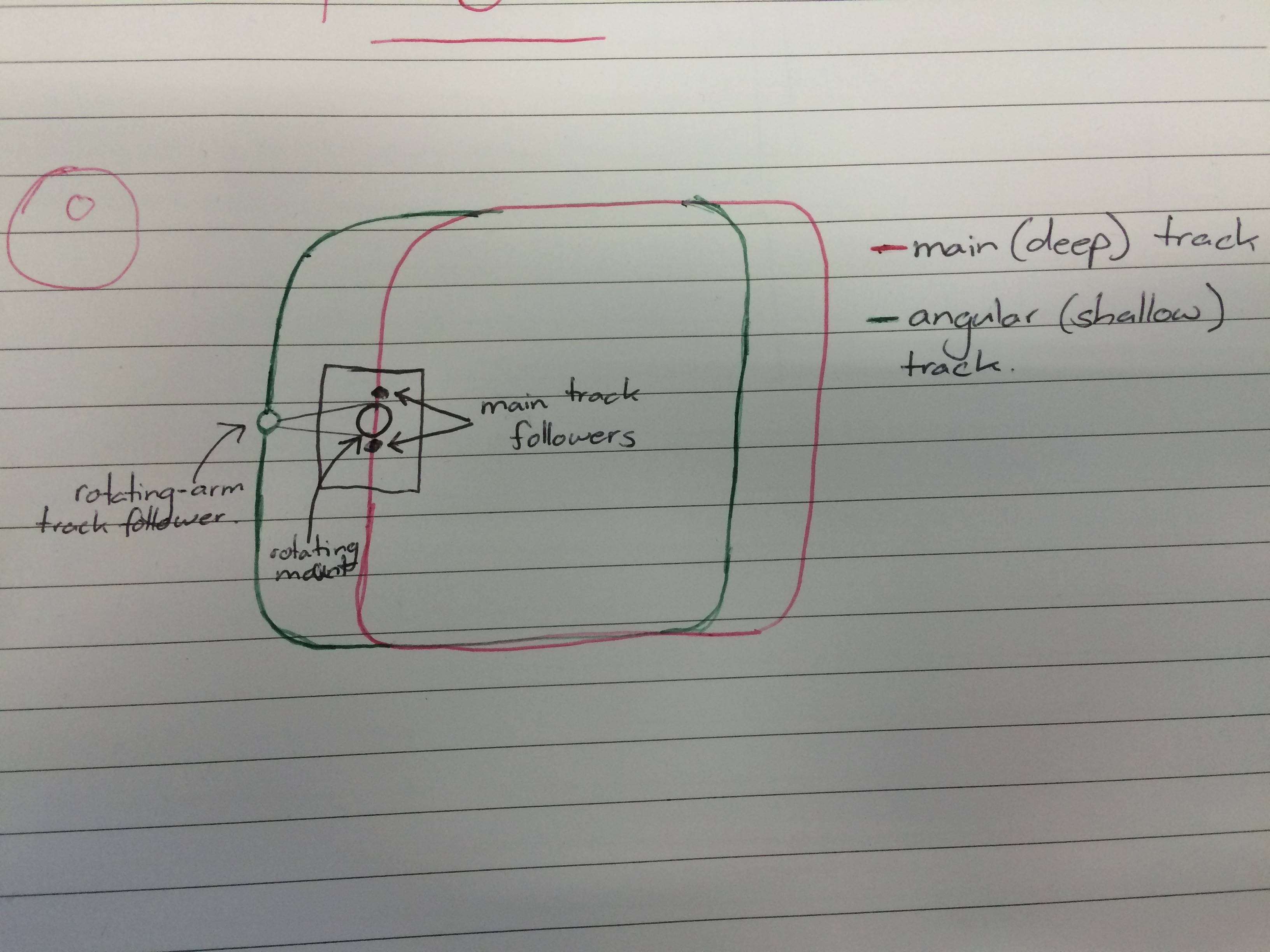 It would be an idea to offset the arm by something other than the depicted offset (let's call it 90 degrees) as then the two tracks would overlap less.

2
How to form a seal around a sharp moving blade?
1
Effect of friction (or horizontal motion) on vertical surface deformation
1
Vertical vs Horizontal Ground Loop Heating
3
What motor torque specs that is suited for a horizontal to vertical 90 degree lift?
14
How do bike wheels keep turning when the rider stops pedalling?
1
horizontal rail to vertical conveyor
2
Minimum drum wall thickness when rope wrapped around it
0
Find minimum horizontal force required to keep the block and wedge stationary?
0
How can (many) mechanical watches keep track of the current day of the month when these vary so much over months and years?