I'm looking to redesign a seal my company currently uses. The original task was to re-source it from a lower cost supplier with the same design as is in current production. However, the supplier doesn't work with the type of material the seal is currently made of (rubber) so in the change of material, we may look at potential design changes. In the interest of cost savings, I'm looking to remove a thread feature from the seal and the mating part, and replace it with a snap fit feature. However, I'm concerned about the ability of the injection molding process to create the current design I'm considering. I'd normally go the supplier, but it's been two weeks since the last (unrelated) item I've sent to them and I haven't heard back, so I'm turning to Engineering.SE for a quicker turnaround time.

A rough sketch of the design is below. The right edge is where the part is currently threaded, and that lip would interface with a similarly sized slot in the mating part, locating the seal properly and preventing it from pulling away (the part inside the smaller diameter lip must translate relative to the seal). 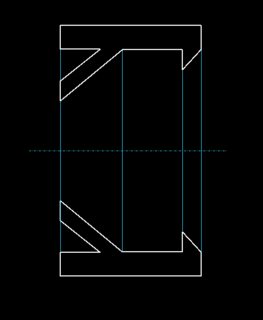 Potentially further complicating this is the fact that the outer diameter is currently reinforced with a steel ring that is fully enclosed in the rubber (plastic in the redesign.) Our customer will probably be looking to keep the strength and rigidity added by this.

What I'm ultimately asking is whether it'll be possible to injection mold this part, particularly whether it's possible to construct a mold that can be removed from this part without destroying it. As a follow-up, if injection molding is entirely impossible, are there other plastic forming processes that could be used to bond and form around a steel ring and create such a part? Extrusion clearly won't work and I can't see vacuum forming working either, and the volume is too high for rapid prototyping to be feasible, but beyond that I don't know enough about the various options as far as plastic forming. (I haven't settled on a replacement material yet, but I'm guessing it'll be some sort of polyurethane.

Based on the angled surfaces on the left, I am assuming that the option of a pass-through core on that side of the tool is not viable. In that case. a collapsible core may be able to create the feature you are describing. Additionally, if this is on a diameter, as I assume, if you "break" the latches on the diameter enough, you can do this with a partial unscrewing core (think two latches at 180 degrees apart and two gaps between them. The feature that creates this rotates so that the steel is out from underneath the latch and then is retracted back.

Just a couple of ideas. Feel free to contact me if you have any questions. This is what the company I work for does.