Which of these propeller configurations is most efficient? 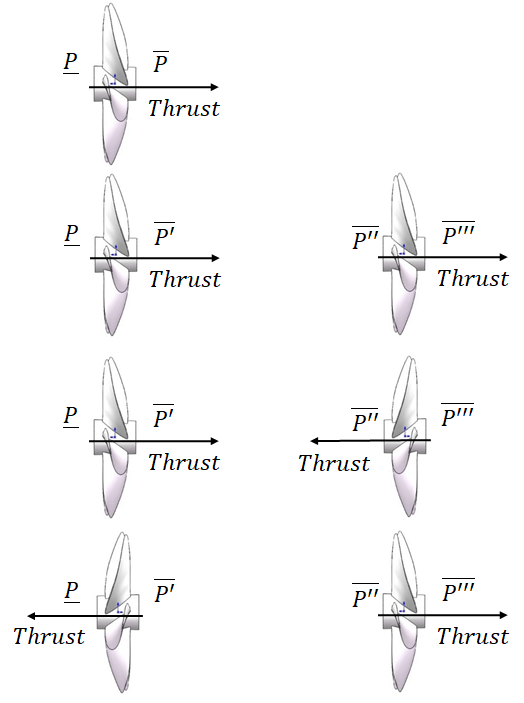 We're mostly concerned with the comparison of the second, third and fourth configurations. Using Bernoulli's equation, the second configuration seems to be non-degrading if not beneficial to the performance (sum of individual thrusts) while the third and fourth are difficult to analyze by this approach since the flow reverses in the region between the two propellers. If we look at the speed of the air flow (air is thrown with high speed on the propeller side opposite to the direction of thrust), the propellers in configuration four affect each other's performance the most perversely. However, it is difficult to assess the comparison of the second and third configurations. The propellers are co-axial although powered by distinct motors and are open to the air. We can assume still air at atmospheric pressure and density with zero ambient flow rate for the purposes of the question. The back-pressure between the propellers is the object of analysis since knowing it would mean we know (at least a part of) the thrust magnitudes.

Which configurations will generate the maximum sum of the individual thrusts? Can we explain the reasoning intuitively (using Bernoulli's equation or other fluid flow concepts) for the higher efficiency obtained in some of the configurations?

Browse other questions tagged fluid-mechanics pressure aerodynamics thrust or ask your own question.

7
How efficient are jet engine thrust reversers?
0
Hydraulic pump choice - which produces most force
0
What is the most efficient way to ionize air?
1
What's the maximum water jet psi we can create?
0
Propeller design
3
Compressing the air thrusted by an aircraft's propeller through a cone like tube
1
Heat Transfer in Different Wire Configurations