I am a Mechanical engineering student and i am completely new to arduino and need some advice. i have a project to measure the maximum deflection in a sailplane wing (up to 9 meters)

ANY HELP would be greatly appreciated 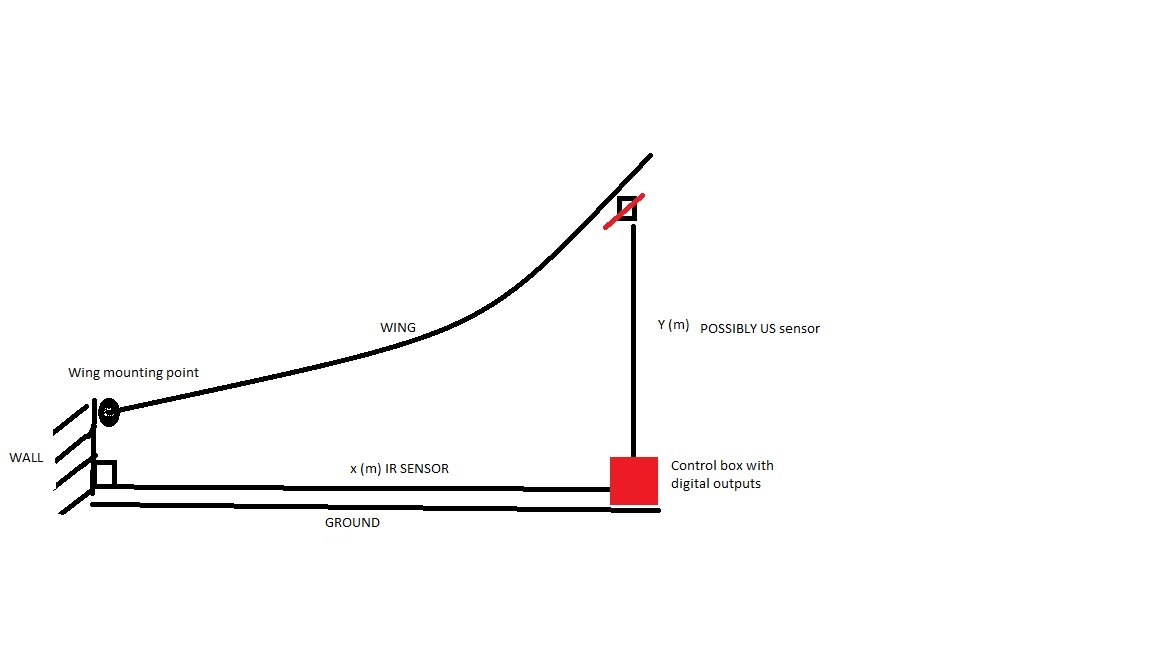 Please draw a diagram of the measuring scheme you're envisioning, edit your question, and add it to your question.

It sounds to me like you're planning on putting a distance sensor on the top of a sailplane's canopy, aimed out to the sides and slightly downwards to point directly at the wing tips. You then correlate the distance to the wingtip deflection. Under higher Gs the wing tips will flex up more.

Since this will likely need to take measurements during flight, even if ultrasonic sensors had sufficient range, the wind noise would likely render them useless, in addition to the fact that you're literally flying away from the sound waves as they occur, causing them to not return as well, and drastically affecting the return time if the sound waves travel with or against the wind at all. If that were the case, you'd have to take airspeed into account to adjust the ultrasonic return time. Plus, the near zero angle is far from the ideal 90 deg angle to the wing tips, making the ultrasonic return very very weak, if it returns at all.

I suggest you buy a laser rangefinder which you can hook up to an Arduino to log measurements. If it doesn't work well due to the shallow reflection angle, then a better plan may be to mount strain gauges to the bottom (and maybe top too) of the wing at a fixed point along the wing (ex: 2/3 of the way from the root to the tip). Then, you can put the sailplane in a test setup on the ground to experimentally flex the wings and correlate strain gauge readings to wing tip deflections.

Another option is to place a large fiducial sticker on the top of the wing tip. Have a high resolution camera on the canopy aimed at the wing tip. Use computer vision and photogrammetry to correlate the angled view of the fiducial to wing tip deflection. The greater the upwards deflection, the more perpendicular the fiducial will be to the camera.

See also my comments below.

I would definitely just use a camera with a rule or other scale or something in the screen if possible to scale rather than designing an entire electronic measurement system if you're not an EE. It should be easier, faster, and more intuitive to set up. You have other project concerns to worry about anyways.

13
Distance sensors with accuracy of 1 mm?
1
Short range distance estimation systems
1
Measuring the level of inflation of an airbag
5
Measuring the road surface quality
0
Measuring angled surfaces with a lidar