What is the contact area between threads and how does it change?

I guess it's important to mention that I was thinking about machined threads not self tapping screws or something like that.

When you see the distribution of the load in a thread, it usually involves only the first few threads. 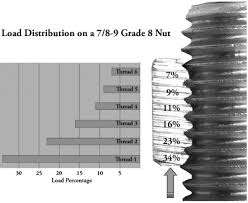 That is easier to understand when you consider that the thread is under load. The load is gradually transferred to the plate through the bolts. The fact that the core of the bolt transfers that load, creates a small elongation/compression (enough to develop pressure onto the thread).

As the load is gradually transferred to the plate, the remaining threads are less and less loaded. Eventually there is no pressure on the threads, because - like you pointed out - machined threads are expected to fit without interference when they are unloaded.

Keeping in mind that bolts are usually designed with a safety factor, and that a portion of the core carries the total of the load, while a single thread carries about 35 to 50% of the load at any time, you can understand that the failure of threads is not usual (unless there are material of uneven hardness involved).

Not the answer you're looking for? Browse other questions tagged threads or ask your own question.

1
Where is the contact point between screw spindle teeth and nut teeth?

5
What does "28" and "27" mean on my metric thread pitch gauge?
6
Is the tolerance of pitch of a thread standarized?
1
How to find the minimum shear area of a rectangular thread
5
Cutting flattened out "threads" to prevent small-scale slipping
0
What is the justification for left-hand threads?