When considering long-term prestressed girder camber (for a bridge), what are the implications (if any) of long-term downward deflection on girder performance? Should prestressing be designed to ensure that long term camber is always upward? 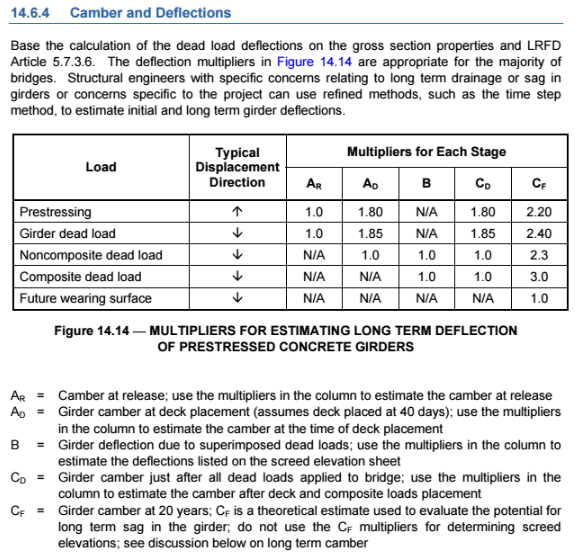 The questions in your title and in your body-text are slightly different.

Prestressed girder camber should usually be upwards. This is because one usually applies sufficient prestressing to cancel out (or overcome) all possible dead loads and some fraction of live loads. This means that without live loads the prestressing will probably be larger than the applied dead loads, even if one only considers the bending moment component and ignores the compression component of the prestress. The girder's total camber will therefore be upwards in the absence of live loads.

That being said, it is theoretically possible (though a terrible idea, economically speaking) to prestress a beam such that the camber is downward. Just prestress the beam along its centroidal axis, such that the prestress overcomes the tensile stresses by simple compression (making sure not to rupture the beam by compression). In such a case the prestress would not generate an upwards camber and the girder's total camber would remain downwards.

Now, onto the second question: there is no problem in having long-term downwards camber. That just means that your prestress' bending moment component is smaller than the dead loads' total bending moment. So long as your compression component is taking up the slack in the long-term, there's no problem (assuming it's not so dramatic as to cross the acceptable deflection limits in the code, of course).

It is not recommended that prestressing levels be increased in order to reduce or eliminate long-term downward deflection that might be predicted if the multipliers in Table 8.7.1-1 are used.

Not the answer you're looking for? Browse other questions tagged structural-engineering bridges prestressed-concrete deflection or ask your own question.

9
What is the effect of end diaphragms on prestressed girder forces/deflections?
4
What is the correct term for long cuts in a floor joist?
5
Should the corbel angle always be estimated as 60 degrees in masonry construction, or is there a formula to use instead?