What are the longitudal tolerances of thread on metric nuts and bolts?

It's not exactly my area of expertize and I've spent a couple hours ears deep in norms, and I'm not really sure if what I found is correct (the figure I found was to the order of 1$\mu$m).

When using standard (off-the-shelf, not specialized) threaded pin / bolt and a matching nut for a lead-screw actuator, what degree of imprecision (free lengthwise movement of the actuator without the shaft turning) can I expect coming from the allowed technical tolerances of the thread? In other words, what amount of play can I expect between a threaded bolt and nut?

To be more specific, I realize there will be movement from lateral and longitudinal flexibility of the shaft; from its mounting bearings; from its axial twist against the drive; and probably quite a few other sources, but I'd like to know this specific factor - how much of a "give" or play can there be in a thread, allowing movement of the nut along the bolt without either of them turning.

I suspect that this changes with the shaft diameter, so a table or a method to calculate the amount of play for most common metric threads would be preferred for an answer. If that's too difficult or doesn't exist, I'm most interested in the value for M10 thread.

Standard threads are classified for accuracy by a tolerance class (You can see a bit about the metric thread fit classes at http://www.amesweb.info/Screws/IsoMetricScrewThread.aspx .) The screws you find at your local hardware store will probably be a relatively rough tolerance class, meaning that the threads are designed to have some gap between them, and also that there will be a large variation in the dimensions of each individual bolt or nut.

Unfortunately for your question, the requirements of the tolerance classes are about the diameter of the crests and roots (and therefore truncation) of each thread, but not about the accuracy of the pitch (how many threads are in any given unit length.)

So there isn't a great theoretical way to predict the backlash for a thread that wasn't really designed for use as a leadscrew. I think your estimate of 1μm is pretty optimistic though. For point of reference, a well maintained manual milling machine might have as little as .001" (~25μm) and that's using a specifically designed leadscrew with a low-backlash design. A less pristine machine could easily have as much as .010" (~.25 mm) of backlash. If your design is using a smaller diameter leadscrew, there will be some improvement, but the tolerances designed in standard threadforms will make it worse. So your backlash would probably be on the order of magnitude of .1mm - 1mm for common leadscrew sizes (with 10mm being at the lower end of that range.)

There are strategies for dealing with backlash, including a 'split nut' where two separate nuts are coupled together and with either spring tension or fine adjustment forced into contact with opposite edges of the bolt thread. The other strategy is to always approach the target from the same side. If this is an option for you, it is the simplest way to solve the problem of backlash without any materials cost.

The link provided by Ethan48 added a lot of informations. 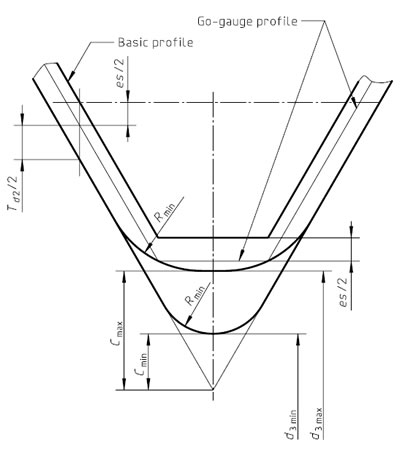 So, for typical M10x1 commercial screws most pessimistic backslash is 0.216mm. In reality it should be significantly lower as the parts are always manufactured with some safety margin from the normative limits (manufacturers aiming at halfway the allowed range), and even small mismatch (imprecision) of thread pitch between the thread and the bolt further reduces the backslash. (and of course, over time, wear will make it worse.)

6
Is the tolerance of pitch of a thread standarized?
14
Calculation of Clamping force from bolt torque
4
Selectively rotating (engaging/disengaging) one of 80 couplings on a small shaft?
2
What is the difference between incremental and cumulative error?
0
What are functional and manufacturing datums
2
How to solve this linear motion problem?
3
What are these rotary to linear movements called?
4
Preventing a DC motor from stalling
0
Inconsistant load cell readings - (static) fiction perhaps?