What's the name of the calculus used to make smooth transitions in roads?

So I'm not actually an engineer, I'm a novice computer programmer but I think in order to solve a problem I have I'm going to need some help from the world of engineering.

I remember in high school they were teaching a civil engineering calculus class and one thing they spent a lot of time on was how to figure out the perfect curve for the perfect slope to transition the road to a bridge smoothly. My computer program is a digital paint and photo software which may include 3D sculpting and modeling later on. There is an existing tool that I don't know a ton about but it does something kind of similar called a Bézier curve and basically, it lets you find smooth curves. But I'm looking for something else as well, I think.

Here's a rough picture of what I'm trying to do. Imagine this is someone's face. It is showing a mid-tone and a shadow. The green circle is where an AI-powered healing stamp will attempt to conceal a blemish. But there's a problem. There's both shadow and midtone in the same area as the stamp, and we're basically inventing contours in the skin. The robotic way to do it would be to just B-line between both instances of shadow, but maybe it would look more organic if there was a smooth transition between the external shadow's slope going in and the artificial shadow that continues.

So, what math would you use to figure that out, and does anybody know of any good place to learn it? Could I do it with just Calculus I under my belt? 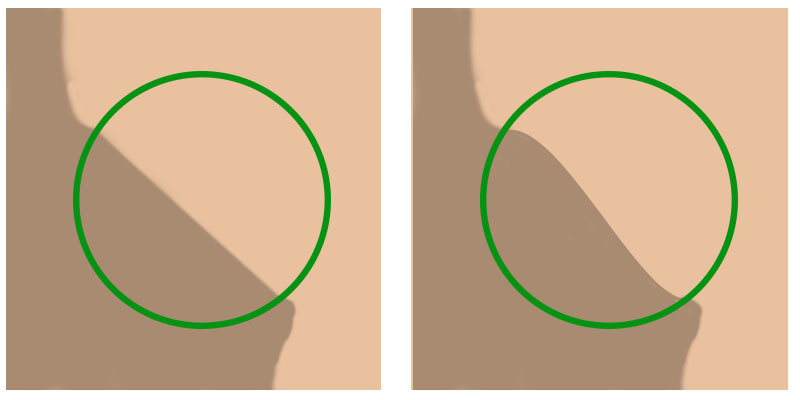 I think you are referring to ‘vertical curves’ for the slope transition of roadway to bridge. Also known as parabolas.

The graphic transition can be accomplished with a spline. Bezier is a spline. See Wiki: Spline

I don't know about image editing but for the roads and railroad track transition from a straight path to a rurn there is a transition called "Spiral Easement".

basically, it gradually eases into the turn and it is a 3-dimensional curve starting from a flat straight path gradually joining the turn with the transversal pitch required to make the turns safer.

if you look at its plan only, it looks like a spiral traced with a rotating generator gradually getting smaller and curving more.

Here is the Wikipedia link. link.

Not the answer you're looking for? Browse other questions tagged civil-engineering mathematics bridges or ask your own question.

1
What is the name of this section?
1
What is the name for a digital height measuring device?
6
Concrete formwork - best approach to counter uplift forces, for a freestanding pour?
6
What's the name and purpose of this specific shape of hollows in a reinforced concrete slab?
0
Which polymers are used to make polymer concrete?
5
What's the concrete core for in a building?
2
What is the technical name for temporary construction fences?
2
What's the difference between Creep and Dynamic Viscous Damping?