How to model this real-world system to define transfer function for stability?

The system shown is an off-axis drive system that rotates the platform to 60° via a substantially-sized NEMA 34 stepper motor. The axial force required by the stepper/ballscrew assembly has already been determined. The maximum axial load on the ballscrew occurs at 40° and is approximately 150lb-force or ≈ 670N. The linear rail is a dual-rail quad-bearing carriage system capable of supporting over 5x the load weight. The stepper motor also will never reach a rotational velocity of more than 2.4 rev/sec and will be operated at full step to maximize torque. (200 ppr or 1.8° per step) The maximum motor torque required at the greatest load point is 1.7Nm. The stepper we have chosen provides 5.6Nm. Long story short, the system is not lacking in power or structural integrity in any way.

However, the system will be operated at specified degree points at low-stepping speeds. For example, it will be stopped at 40°, and then "stepped" in slow increments of 1.8°. I am controlling this via LabVIEW and can rotate the stepper at any number of 1.8° steps per second I choose. This positioning control is 100% open loop and determined by the operator. I am trying to determine the mechanical stability of the system as it is given this "step" input under a load. I'm not sure where to begin with deriving a transfer function or how to model it. As you can see, there are gas springs that assist the operation. Maybe it should be modeled as a spring-dampener system? I am not sure. I have Simulink and would like to be able to model they system in there...I'm just not sure where to start. Thank you. 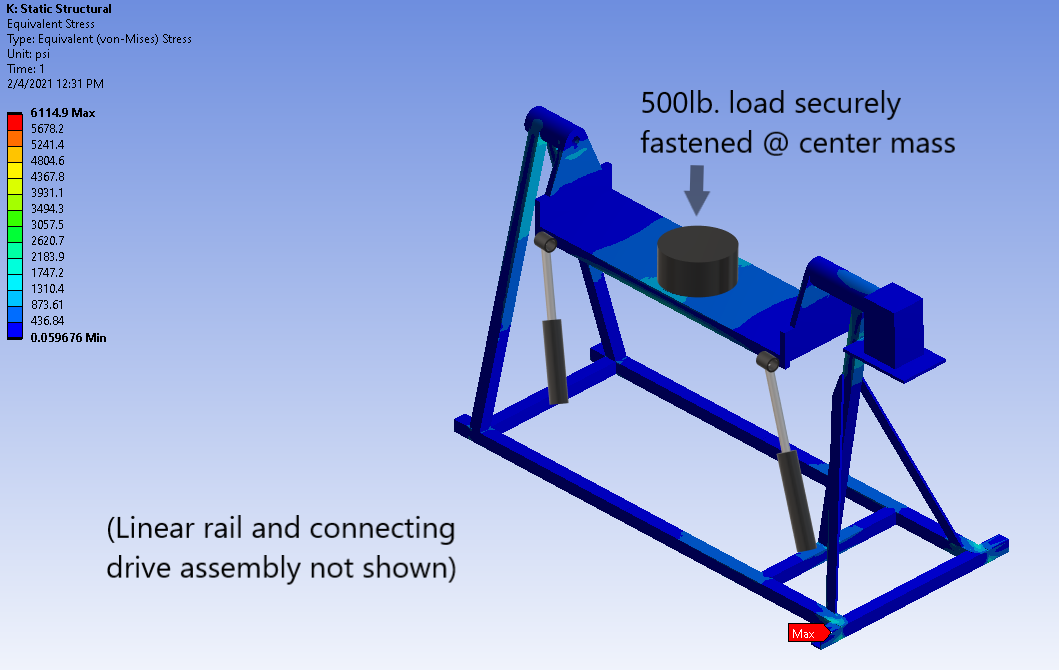 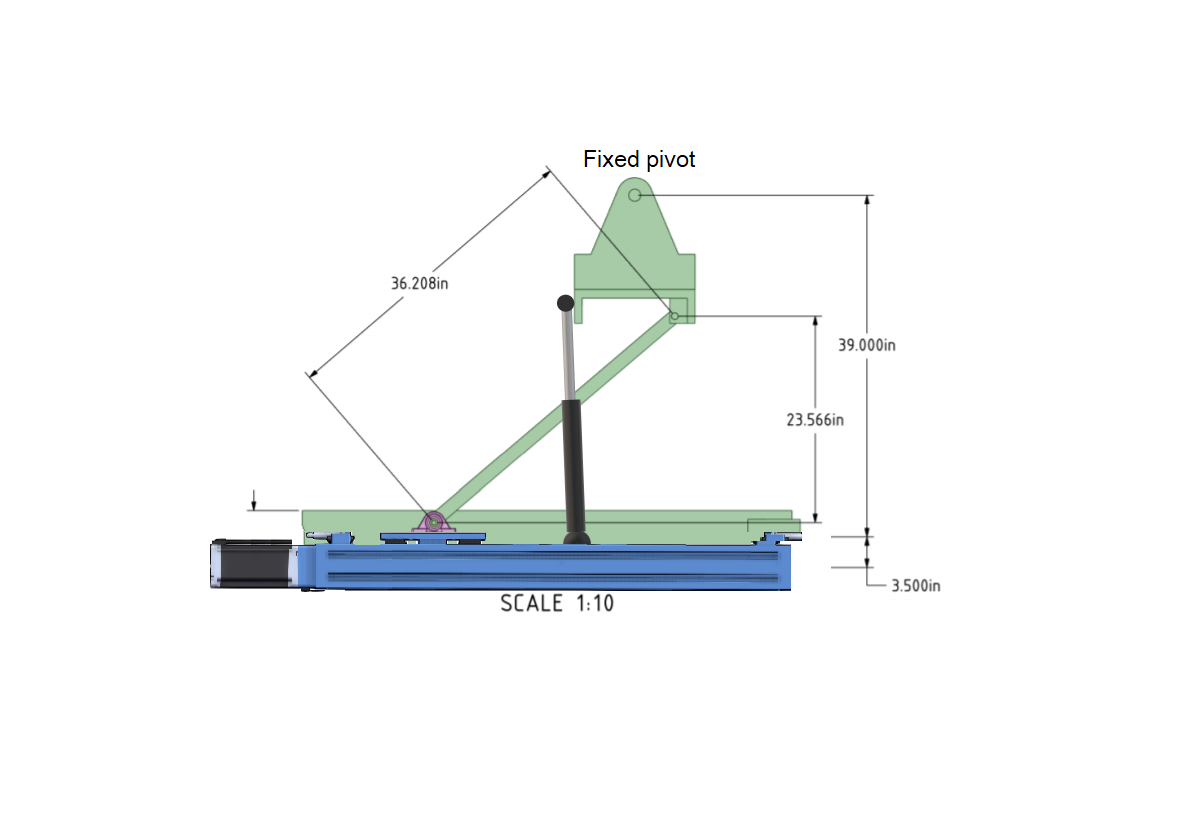 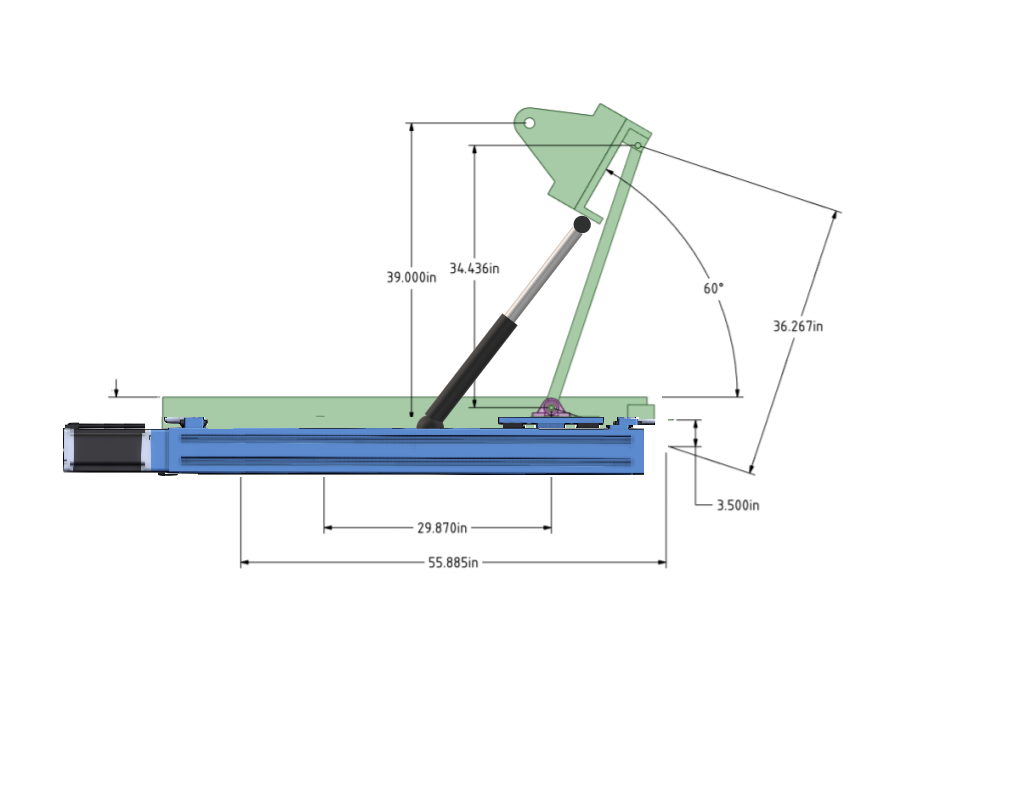 write out equations for the kinematics, then the forces, then linearize the resulting differential equation, then transform the linearized version to frequency domain, which is your transfer function. This result will vary (i.e. is parametrized by) the range of positions.

A "good" mechanism would have a transfer function that is essentially constant at each input position.

If you suspect you have unwanted dynamics (i.e. ringing or oscillation from a step), coming from the drive mechanism or structure, which you should know by now since you have been using it and measuring it, you can possibly trade some of your excess drive power to reduce such unwanted dynamics, with an additional axial load on the drivescrew nut.

On the other hand, if this is an exercise to show that you can analyze these, then with a little advance planning, it would be possible to create for yourself a system that behaves in a way that is easy to analyze and "fix", by putting in something springy in a strategic location. You would of course begin by understanding the behavior of that element.

Also it looks like the angular direction in which the driving linkage, and the spring-cylinder-thing are pushing, go from being opposite sign to same sign, as you travel thru the range. That may be of interest.

A critical question is whether the drive screw can back-drive (translate an axial force at the nut into a torque on the motor). Complicates the analysis if so, as you would have to bring the stepper motor's dynamics into the picture. Besides that be wary of other sources of 'backlash', i.e. at the bearings in all the linkages. Anything like that can complicate analysis, and can usually be fixed mechanically.

3
System model for motor controlled inverted pendulum with rotating motor body (used in camera stabilizer application)
4
Optimising driving speed of stepper motor for maximum acceleration by trial and error
9
How does load force impact load inertia?
0
How to solve system's general stability from transfer function?
0
Ceiling Mounted Camera Slider with Pan
2
How to convert a DC motor into a servo motor using a rotary encoder and a microcontroller?