I want to build myself a pull-up bar. I am confident enough that I can guesstimate how much material I need for it to be strong enough, but this time I would like to challenge myself to properly calculate all the strengths needed.

However I am stuck at the first point -- how do I properly estimate the loading on such a thing? By this I mean only the maximal instant force that my body would apply to the bar, safety factors will be added later.

Is there some standard that tells you what dynamic forces to expect from a human body?

My best guess so far goes something like this: I can hang on single hand, but not with another person pulling me down, so the max total force that I can apply to the bar will be somewhere between 2x and 4x my body weight, anything more and my hands will certainly slip. Therefore I design for 4x my body weight and add safety factors on top of that. Does that make sense?

Like alephzero already mentioned the pull up part is usually the less stresses part. The problem is with the deceleration forces when you are at the top of the pull up bar and suddenly you let your self down. Although that seldom happen (i.e. there is a constant force for deceleration), it is best to assume the worst case scenario.

Assuming you are at the top and you let go, the velocity can be calculated by the following formula:

That velocity is the free fall velocity of your body (arms should be excluded because they will not be travelling with the same speed as the torso but that's a detail, so I'll just keep it simple).

Now assuming that the duration of deceleration is 0.1[s], from the relationship betwen impulse and momentum you obtain:

From that point it depends what sort of approximation you make for F. 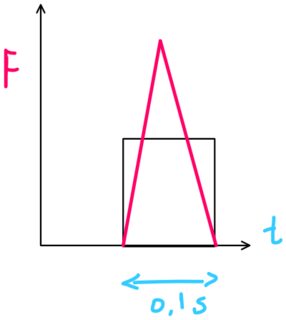 If you assume that F is: -constant then you can estimate that:

There are other approximations (sinusoidal), but for the purposes of this don't make much sense. I would go for the triangular.

It is noteworthy that the deceleration force, is added to the force of weight, but you can see that is almost another order of magnitude (just like alephzero proposed).

I would take it a step further and suggest that you should add something extra (possibly double it although that is starting to be an overkill). However, its something you don't want it to bend nor break while you are at it.

This is very dependent on the duration of the deceleration. So doubling $dt$ results in smaller forces.

comparison with pull up weight

As you can see, the comparing the deceleration force, compared to the pull up force (which is quasi static), makes it easy to understand that the deceleration scenario is much more punishing to the beam.

Yes, That is a good estimate.

Of course, If you have access to one of those benches with lift up weights, the ones that have rubber bars locking you in, you can directly measure your maximum lift.

Since you want to challenge yourself with the design process, it would be good to use the force information not just for strength of the bar, but also the deflection. For example when you design a bow for archery you want deflection, and when you design a bridge, you don't. Olympic weightlifting bars are somewhere in between So it is worth considering how flexibility will influence your use of the bar.

1
What thickness of steel bar/pipe for home gym?

4
How to calculate the relative contribution of each mode in seismic dynamic mode analysis?
0
Can Dynamic Base shear be greater than Static Base shear?
0
Relation Between Distributed Load and Shear
1
Internal load in cremona diagram
1
Analizing Vibrations Influence on Dynamic Weighing
1
Wind load vs Earthquake load and R factor
0
UDL vs Point Load on Truss
0
How much load could the ceiling hold