So I'm looking at performance curves for thermoelectric coolers, and it seems like these curves are so misleading as to be useless unless I'm missing something fundamental.

Suppose I have a thermoelectric cooler, and I manage to pump it with enough current to achieve a given temperature differential between the two plates. This temperature differential will itself cause heat to flow back through the semiconductor that makes up the thermoelectric cooler. For the one I happen to be using, based on the thermal conductivity of bismuth telluride (assuming this is the semiconductor involved) which has a thermal conductivity of ~1.2W/(m*K), and the dimensions of my TEC (20x20x3.6mm), it looks like I should have a thermal resistance of about 7K/W. This means that anything below the line that starts at the origin and has a slope of 7K/W will always be unachievable, but this region isn't specified in the thermoelectric cooler's datasheet, nor is its thermal resistance.

When I actually try to drive the TEC with a known current (4.5A), if the datasheet's operating curves are to be believed, I should be able to get a $\Delta T$ of about 50C between the two plates when I am not pumping any heat. In practice, though, I only get to a temperature differential of about 20C (despite having nothing on one side of the TEC except my tiny temp sensing IC and the other side attached to a massive heatsink I keep at room temp). It seems like the quoted $\Delta T$ is complete nonsense, because what will ultimately constrain the maximum achievable temperature differential is the thermal resistance of the TEC. Anything below the line of thermal resistance of the TEC is not achievable, and the quoted $\Delta T$ doesn't actually mean the maximum achievable temperature differential, but is just the intercept if you extrapolate the operating curves to the x-axis.

Am I missing something? 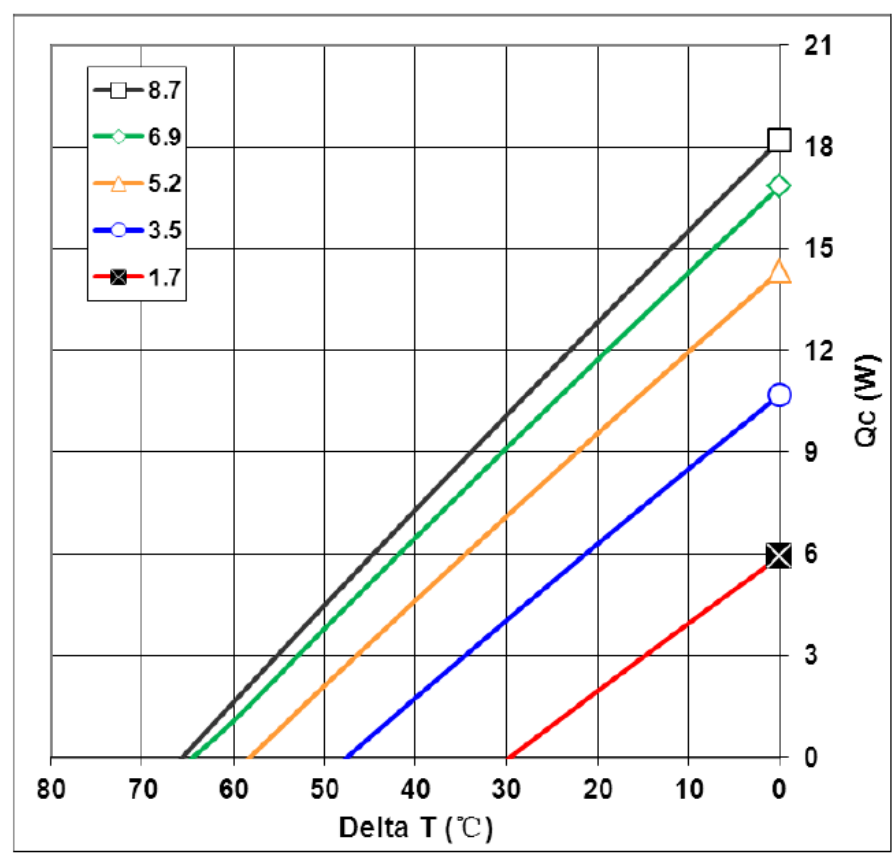 Browse other questions tagged electrical-engineering thermodynamics circuits thermal-conduction or ask your own question.