Why do I see stresses on the fixed support face of a solid body in FEA?

Below, I have shared pictures of a simple model in FEA. As it can be seen that the face onto which the fixed support is applied, there exists Von-Mises stresses. I cannot comprehend why. Since the nodal deformations are equal to zero there, but still there exists stresses. I am aware of the fact that there must be a transverse reaction force on that face due to poisson's ratio effect, but still why would I see stresses there. In reality, if a face of a solid body is extremely rigid because of how it is supported, should I still expect stresses on that face?

Deformations and stresses are different things. Stresses and strains are a function of the derivative of deformations, not the values. Consider a rod in tension, fixed at one end with a tension force applied to the other. The normal stress in every part of the rod is force over area. This is just as true for the fixed face as the other faces.

This has nothing to do with FEA implementation, or shape functions, or element types as the other answer says. You are getting stresses because the true elasticity answer has stresses in it.

Now there are two other things that are important.

Because the von Mises stress, considers the contribution of shear and normal stresses, you are expecting to see some non zero value of stress even if either the normal or the shear stresses are individually zero. If you select another representation (in this case radial/tangential stresses, then you would have a different picture).

If you take a closer look at the image you uploaded, the shape of the contours is not the coincident with the element boundaries. 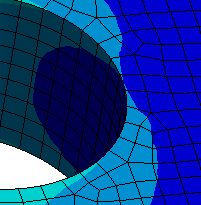 Essentially what happens (to spare details about an implementation I am not certain) is that in the most basic for FE, calculates properties for the element at the nodes, and then uses approximating functions (see shape functions) to interpolate what is happening in the other point. When you have a linear element (1d) things are relatively easy to grasp. However as you transverse the dimensions (2 and 3d) things can get difficult based on the element implementation you are using.

For example the simplest form of a 2d Element (used for shells) has a triangular form. In the simplest form (no intermediate integration points) the element has a constant strain (it is actually known as CST - Constant Strain Triangle). If you go to a 4-node surface element, then you can have a strain gradient. What is interesting to note, is that for those simple formulations the strain (and stress if you are using a linear solver) is not necessarily matching at the element boundaries with its adjacent elements (apart from the nodes).

Higher order elements use more sophisticated methods, and the result is the interpolating curves you see in the image above.

The elements with the fixed faces are stressed. The Von Mises stress is non zero when the element is in a state of stress. The software interpolates the values between the nodes with shape functions.

Not the answer you're looking for? Browse other questions tagged mechanical-engineering stresses finite-element-method solid-mechanics or ask your own question.

5
What is the script function to select Solid Body in ANSYS Design Modeler?
3
Why is there a moment at the cross section end when you cut a body?
1
Rigid Body Rotations and Engineering Strain
1
why does the body have an no angular acceleration if the applied force passes the center of mass?
8
Moment equation from dynamics differs with equations from physics & statics. Where did I go wrong?
0
In the general case of the plane motion of a rigid body, the resultant does not pass through the G of the body. Why is that?
1
In FEA, why is the stress at an interior angle (<180 deg) is a singularity and an exterior angle (>180 deg) it is not?