How to calculate the force of a cantilever beam at a given point of deflection?

where $ρ$ is density, $A$ is cross sectional area, $E$ is Young's modulus, and $I$ is the moment of inertia.

I have run this simulating a simple deflection where this beam (clamped to horizontal at points 1 & 2) is moving upwards in the positive y-axis until it strikes an immovable object at point 12. 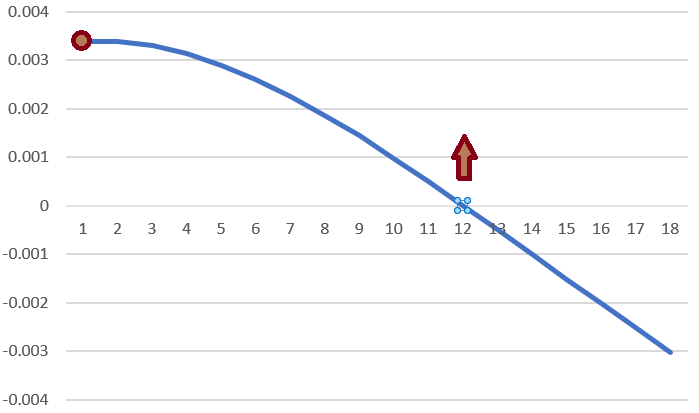 I am now wondering how I would calculate the force exerted by the beam at point 12 based on my finite difference model.

In the finite difference wave equation, local force at any given node would be given by:

The problem is I think this is just the local force for that node relative to the neighbors. It's not giving a reasonable/useful total force output just by calculating the force at that one point.

This makes sense as the force it calculates is based on the fourth spatial derivative, and at the collision point it's almost perfectly straight so this will be near zero. Most of the restoring beam force is coming from the strong bend closer to nodes 1 and 2.

If I want the total force exerted on the "immovable object" striking the beam at point 12, how would I get that?

I know that in a general approximation, this is given by:

Where $y$ is y deflection of a given point, $a$ is the distance to point of collision contact, and $x$ is the position of the point you're assessing. But I actually want to figure this out from my finite difference model so it can account for funnier shapes/motions.

I wonder if this is given by bending moment and stress force:

Where $y$ is the deflection from neutral and $A$ is cross sectional area.

However, I'm getting nothing useful from that. For a simple small plastic lever which should only generate 12 N or so of force from the general estimate equation I'm getting 10s of thousands of newtons using this approach.

This is not really an answer but a hint.

I agree with you that the impact is not limited to the small collision zone and propagates back and forth throughout the length of the beam and the vibration speeds can easily become supersonic, with the air cracking sound.

What you are asking is called whiplash vibrations. Your beam is considered a whip and the rigid point should have some nominal flexibility otherwise it will break or tear the whip.

Before the era of computers fifty-some years ago we used the energy methods and calculus of variations to find and equate the lagrangian of the system to zero. It would require several times integration by parts and be very hairy and error-prone.

I guess modern simulator programs can easily model that.

Not the answer you're looking for? Browse other questions tagged mechanical-engineering beam waves or ask your own question.

0
Using strain energy to calculate deflection
0
Simple beam with cantilever ends
0
simple supported Beam deflection question involving two point loads and a UDL
3
Derivation of the stiffness of a uniformly loaded cantilever beam
1
Simple cantilever beam deflection - what is the simplest way to add a damper?
0
Deflection Equation of a Stepped Beam
0
Calculating the von mises stress in a 3D beam when given stresses and moments on both ends