If you observe the attached figure, I heard some FE analysts say that the stress at the interior corner is always a singularity (but its intensity depends on the value of interior angle) but the stress at an exterior corner is not. I cannot understand why. Some even say that the theoretical value at an exterior angle is supposed to be zero. My question is that is it always the case? Does the exterior angles of a geometry can never result in a singularity, for any type of loading and boundary condition applied to the geometry? Reason being? And if sufficient mesh refinement is provided, so will the stresses at the exterior angles result in values close to zero?

Fair warning, I'll be anthropomorphizing and using metaphors throughout this answer.

It helps to think in terms of how the applied force "flows" through the element. It "wants" to get from the top where it is applied over to the fixed support. To do so it has to go down and to the right (though doing so actually means going left at first).

The force likes to take the shortest possible path to the support, so it tries to make a sharp turn at the corner. This basically creates a "traffic jam" near the inner corner while leaving the outer corner much freer.

The following image is a sketch trying to show these "force lines" and now they flow from the top to the support. Notice how they bunch up near the internal angle. 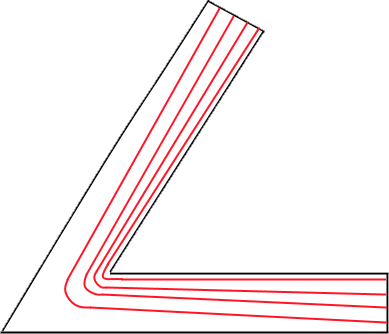 You could draw as many lines as you want and you'd get arbitrarily close to the external corner, but the "density" of lines near it will be much lower than near the internal corner.

Not the answer you're looking for? Browse other questions tagged finite-element-method or ask your own question.

5
What is the difference between FEA and CFD?
1
FEA: What is the difference between a spider of RBE2s and multiple SPCs
1
Why do I see stresses on the fixed support face of a solid body in FEA?
0
Computing the stress field of a structure made of 4-nodes shell elements (accounting for membrane action, bending and shear)
0
Calculating the von mises stress in a 3D beam when given stresses and moments on both ends
2
Why should I use a contact between two glued bodies in FEA when I can directly merge the mesh nodes between them?
0
What is the difference between Frictional non-linearity and Geometric non-linearity in FEA? (In terms of Stiffness matrix)
1
Why is the amount of force/moment transfer occurring between bodies in FEA is independent of mesh size?