In the figure attached for reference, it is given that if $R_1$ is the resistance element of valve 1 and τ ∝ $R_1$, but I am not able to understand it intuitively.

Please tell where I am wrong in my logic. TIA. 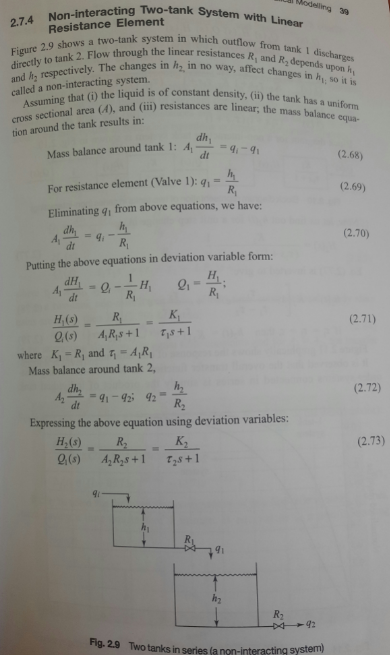 I'm an electrical engineer so this problem looks to me like an RC (resistor-capacitor) discharge. In the case of a resistor discharging a capacitor the time constant is given by τ = RC. In your case C represents the tank capacity and R is your R1, the resistance to flow.

It should make sense that τ will be proportional to (increase with) both the cross-sectional area and to increasing resistance of the output valve.

Some rules of thumb commonly understood in the electronics world are:

Although Transistor made a perfectly good analogy, I will give my view from an mechanical engineering point of view.

High resistance R means that flow will be restricted. I.e. to empty tank one you would need more time.

The characteristic time $\tau$ in this example is indicative of the time it will take to from empty about 2/3 of the tank.

$\tau$ is related to discharge because $R_1$ in this example controls only the output. This is in contrast to the case electrical case where R controls both charging and discharging.

As you can imagine the more restrictive the flow, the more times it takes to empty the tank, the higher the value of $\tau$.

If flow is q, and pressure is p, The linear flow characteristic "R" is defined such that p = (q)(R)

This is directly analogous to V = IR in ohms's law, in the electrical analogy.

In this case, pressure is being reckoned in units of height, for which it should be mentioned that p = (ρ)(g)(h) where the greek letter rho (ρ) is the liquid density, g is the gravity (9.8m/s^2), and h is height.

We substitute this into equation 2.68:

which is a first order ODE, so the solution is exponential form, and the time constant is AR, which is of course proportional to R.

Not the answer you're looking for? Browse other questions tagged electrical-engineering control-engineering instrumentation flow-control liquid or ask your own question.

5
Logic gates for an indicator light to show the state of two sensors
3
What type of liquid flow control could this device use?
2
Mirror-like reflective liquid crystal display panel
0
How to control the level in multiple connected tanks at the same time?
1
Control of second order undamped system
0
PID-control of undamped system