Why are there no mufflers for water plumbing?

People who live in multi-unit apartment buildings often need to be careful not to bathe late at night, because their neighbors will be able to hear the sound of the water going through the pipes.

As I understand it, this sound is made by turbulence which occurs when the water moves through a small orifice such as the valve of a faucet or shower. The vibrations caused by the turbulence travel through the pipes and this is why they can be heard in a neighboring unit.

I have long wondered why we don't prevent this sound transmission by installing mufflers in water plumbing. They would be installed upstream of the constriction point and could consist of any number of shapes encouraging sound to reflect back toward the source. For example, replacing a section of pipe with a pipe of a larger diameter should create two points where sound can reflect, diminishing transmission. Inserting an "S"-shaped segment should have a similar effect. These principles are also used in designing air ventilation ductwork which blocks sound transmission.

Automobile exhaust mufflers come in a variety of shapes and sizes, such as in this 2007 patent or this 2012 patent: 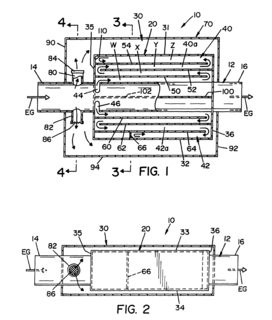 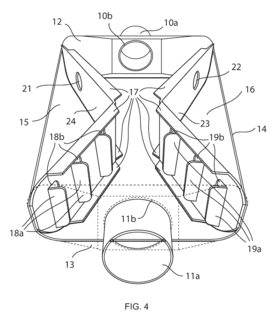 Can anyone explain why the principles that we use to block transmission of sound through tubes of gas, such as the exhaust system of an internal combustion vehicle, or ductwork for a home theater system, aren't useful to create silent plumbing?

Browse other questions tagged acoustics sound-isolation or ask your own question.

13
Are there any materials known to be sound-insulating but thermally-conductive?
1
Why noise canceling headphones do not attenuate the signal itself?
2
Are there general-purpose acoustic FFT sensors for plant diagnostics?
0
Using the bitrate value on a calculation is causing contradiction, why?
1
Why is the Cape Elizabeth Fog Signal shaped like this?
2
Is there a technical name for a sound dampening suspended cylinder in loud indoor environments?
6
Are there materials that are good at transmitting sound but thermally insulating?