The direction of the internal axial force of a tapered bar 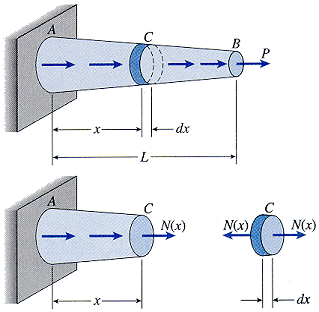 If the bar is separated in to segment AC and segment CB, to maintain its equilibrium, Shouldn't the N(x)s be directed in opposite?

From both images you have the internal forces ($N(x)$) are opposite for facing cross-sections.

The portion denoted as C, is a very thin cylindrical disk with two opposite facing surfaces.

PS: This is not a real answer. I need to show the image. If the question updates, I will probably update this post to something more meaningful.

I assume you are referring to the green encircled arrows in the image below.

The reason is that the author of that image wants to point out that when P is applied at the end, then at any point between P and the support there is a tensile force.

Essentially that the beam "carries" along the force between the point of application (B), and the support (A). In my native language, a more generic term to describe the beam (or any system that "carries" the force) is literally translated as "carrier" (I've not seen it in English though).

The point is that when you take a sliver (a thin disk of material) along AB , at any point you would get C the same behavior as the sliver C. Actually, it doesn't have to be a thin disk of length dx. A portion of any thickness between A and B would exhibit the same behavior (such as the bottom figure with FF' at the original post).

2
How to describe the rotation of opposite ends of a body due to an applied moment
0
Does a rotating bar experience lateral force?
4
Removing beam deflection through axial force
4
Finding downward force of lever bar
1
Axial force in threaded axis
3
Why is the partial derivative of stress in the circumferential direction equal to zero in axial symmetric bodies?
1
Can a simple application of two forces have two different outcomes on a rigid body?
2
The internal normal force, shear force and moment
1
Determining the direction of internal forces in a truss
0
Dimensions of a bar when it is subjected to axial pull