What really is the difference between allowable stress design and ultimate limit state design?

I'm trying to understand this difference. From what I've read, ASD basically deals with making sure the stress in a structure does not exceed a certain limit, the yield stress of the material. It ensures that structures remain in their elastic region while subject to designed structural loads.

But don't these two design philosophies in the end boil down to the same thing, making sure the structure (steel structure for example) does not reach a stress too high? For example, we might check a steel beam against loads by calculating the expected characteristic loads such as wind and dead load, combine these according to different defined ultimate states and then check that the stress resulting from these does not exceed the yield stress of the beam. But isn't this in the end what allowable stress design does? What is the practical difference between the two?

EDIT: Making further research, I noticed that limit state codes do sometimes allow yield to occur. For example, in Eurocode 3, part 1-1, 6.2.5, it is stated that the resistance of a cross section against bending is determined using the plastic section modulus. 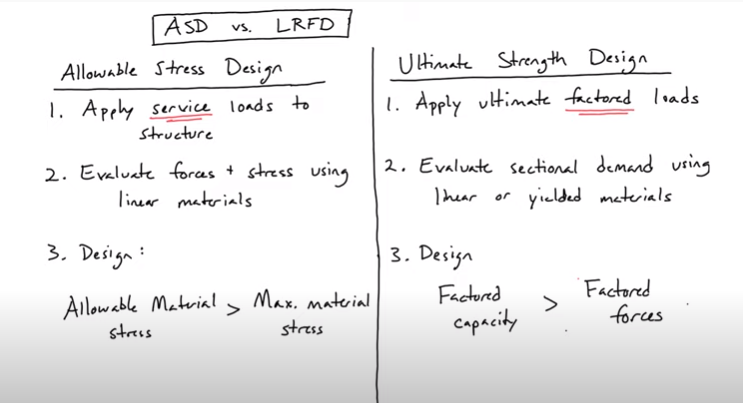 Here the difference is given to be that in ASD, we use service loads which are the expected loads without any safety factors applied. Aren't these what are known as characteristic loads in limit state design? In contrast, it is stated that limit state design uses factored loads. So why is it that in ASD we use loads without any factors? Aren't safety factors there to take uncertainties in things like material properties and modeling theories into account? Why don't they exist in ASD?

Browse other questions tagged structural-engineering or ask your own question.

15
Why do we even use engineering stress?
0
Difference between Allowable Bearing capacity Service and Ultimate?
0
Slab Stiffness Modifiers applied in Vertical Elements design but not in Slab design?
4
Why is local yielding considered the limiting case in context of buckling in Eurocode?
2
Why isn't von Mises criterion valid when compressive and tensile yield stresses differ?
2
What is the difference between to Eurocode design equations (6.10a and 6.10b)?
1
Why loads in serviceability limit states usually don't include factors of safety?
0
Design of pinned joint to Eurocode