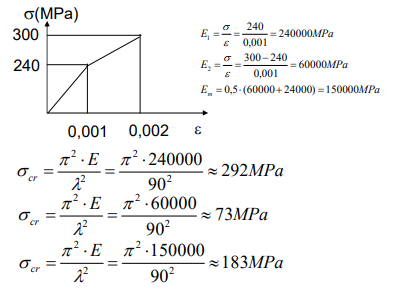 Above picture is from my lecture notes. It deals with a column subject to axial load, which follows Euler buckling theory. The material is nonlinear, approximated by two lines as seen in the stress-strain diagram. The two elastic moduli, $E_1$ and $E_2$ are calculated. Then the buckling stresses corresponding to both moduli are calculated.

It is then noted that neither of the buckling stresses are located in the range where the material follows the corresponding elastic modulus.

It is then stated:

Application of Euler's theory becomes problematic when the elastic modulus changes significantly. The buckling now happens when the material reaches the lower limit, which is also when its modulus changes.

Why does the bolded sentence hold true? Why is the buckling now assumed to happen at the limit of the first line? I cannot picture in my head what happens in the situation when neither of the buckling stresses are inside the ranges where their corresponding elastic moduli are defined. And if we are able to somehow conclude that the buckling happens at this lower limit (240MPa) why is the application of Euler's theory "problematic"? Didn't we just get an answer?

Another thing is said:

In design norms there are often limitations to the slenderness and deformations due to the theoretical variety of the buckling event.

What does this last sentence mean? What kind of limitations are there and what is meant by the "theoretical variety of the buckling event"? (please note that these lecture notes are not in English, but this is the closest translation that I could come up with)

Regarding the first part of your question " The buckling now happens when the material reaches the lower limit, which is also when its modulus changes"

If I understand correctly your problem is what happens is when the buckling stresses are not high enough. Obviously there is a chance that there might not be buckling. However, keep in mind that when you are talking about buckling loads (forces) are more descriptive than stresses. (If a stress for a column is safe, then for a column twice as long the same stress is not necessarily safe).

However, if the loads are low and there is indeed buckling, then what happens is the following. There is an global/local instability, and usually a small part of the material undergoes very rapidly a very significant deformation. Obviously that deformation is associated by an increased stress.

However, as the stress increases, when you rise above the limit of $E_1$, then the deformation is even more quick. Which, it turns accelerates the bending moment which drives the buckling.

It is noteworthy, that buckling is a situation which is self-accelerated. I.e. geometric imperfections gives rise to a moment, which in turn promotes further lateral deformation, which in turn increases deformation and so on and so forth....

Regarding the second part, I will continue tomorrow.

In Euler buckling theory, buckling occurs if a small (infinitesimal) lateral deflection causes a reduction in the internal strain energy of the structure.

That calculation is problematic when $E$ is not constant. In your example, if $\sigma > 240$ MPa, the strain energy in the unbuckled state depends on both $E_1$ and $E_2$, and that is easy to calculate from the given stress-strain graph.

However the infinitesimal lateral deflection involves increasing the compressive stress on one side of the beam and reducing the compression on the other side. Calculating the corresponding energy change depends on making assumptions about the plastic behavior of the material, since (presumably) there is plastic strain in the structure when the stress has exceeded 240 MPa.

You could make some sort of calculation by assuming the stress-strain curve for the increase had slope $E_2$ but the slope for the decrease had slope $E_1$ (i.e. if all the axial load was removed, there would still be a non-zero plastic deformation of the column. But whether the results mean anything in the real world is a different question.

IMO the second quote just means "Euler buckling is a nice simple theory, but it ignores so many real-world effects that it is usually very inaccurate".

I think it is imperative to know the assumption made while the formula was developed, here is the one most relevant to your question: "The column fails only by buckling". This is true if the compressive stress in the column does not exceed the yield strength. In another word, the stress in the column remains elastic. See figure below. 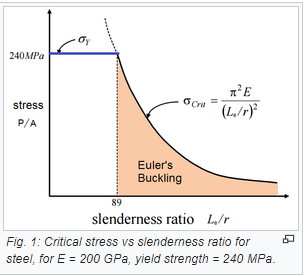 Not the answer you're looking for? Browse other questions tagged structural-engineering buckling or ask your own question.

15
Why do we even use engineering stress?
0
Do I understand column buckling?
0
sign of moment in buckling of column
0
Why is buckling caused by nonlinear geometry?
9
Definition of buckling as a sudden deformation
1
What Causes Asymmetrical Buckling in this structure?